Every Garment Worker Must Test Twice for Covid-19 Before Sept 10: Labor Ministry 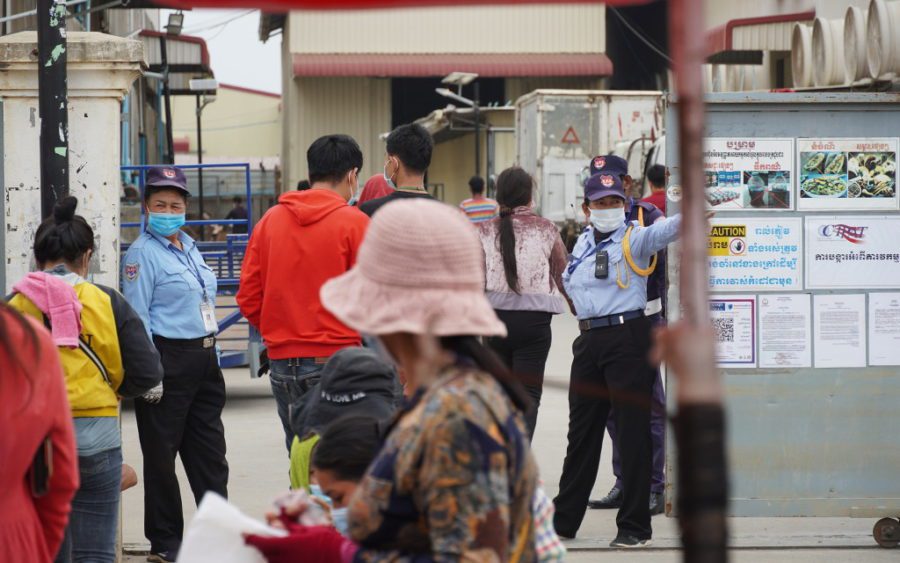 Guards at the gate of the Y&W Garment factory in Phnom Penh’s Dangkao district on March 3, 2021. (Tran Techseng/VOD)

A Labor Ministry directive issued this week tells factory owners to test all workers at least twice before September 10 as precautions for the coronavirus Delta variant.

The directive, dated Wednesday, says the garment, footwear and travel bag sectors must especially be prepared with rapid tests for all workers. Factory owners can buy the test kits from the Telecommunications Ministry or other legitimate sources, it says.

Meas Sareth, administrative chief at the W&D factory in Phnom Penh, said on Thursday that her factory was ready to follow the government’s instructions and test all workers.

“Requiring us to pay for this equipment is not a problem for our factory. Currently, the boss is ready for us to test the workers,” she said, adding that W&D has a total of 835 workers.

The administrative director of the JS Leather bag factory in Phnom Penh, who gave his name as Bunna, said the two branches of JS Leather have more than 3,000 workers.

Though they are ready to implement the Labor Ministry’s instructions, the factory owner is also concerned about expenses and lack of medical staff who can conduct the tests, Bunna said.

“Sometimes, the boss complains about more losses, but there is no choice. The ministry issued and we have to follow. If we do not follow, they will do inspections on that work. If they find that we have not complied, it will be a problem for the factory,” he said.

Soeung Pros, a worker at W&D, said frequent testing was reassuring. But many colleagues who had chronic illnesses or problems with their noses did not like the tests, he said.

“They are always worried and they are afraid of getting tested too often, and it could further affect their health,” Pros said.

“I am not afraid of being checked, because if we are positive, we would get treatment on time, and get benefits from the company, 100 percent and 70 percent from the NSSF,” he said, referring to the National Social Security Fund.

Cambodian Alliance of Trade Unions president Yang Sophorn also welcomed the testing requirements, and suggested that medical staff be made available to conduct some of the tests.

“We welcome the tests so that we will know for sure whether we are sick or not. If we are sick, we need to go to a place where we can be taken care of so that we do not infect our families. This is an important thing,” Sophorn said.

The Telecommunications Ministry announced in July that it had imported rapid Covid-19 tests from South Korea, and would make them available to businesses for $3.7 per test. The ministry can also provide training on how to conduct testing, it said.

In a statement last month about “wage theft,” the Clean Clothes Campaign said the industry was currently employing 784,000 workers.