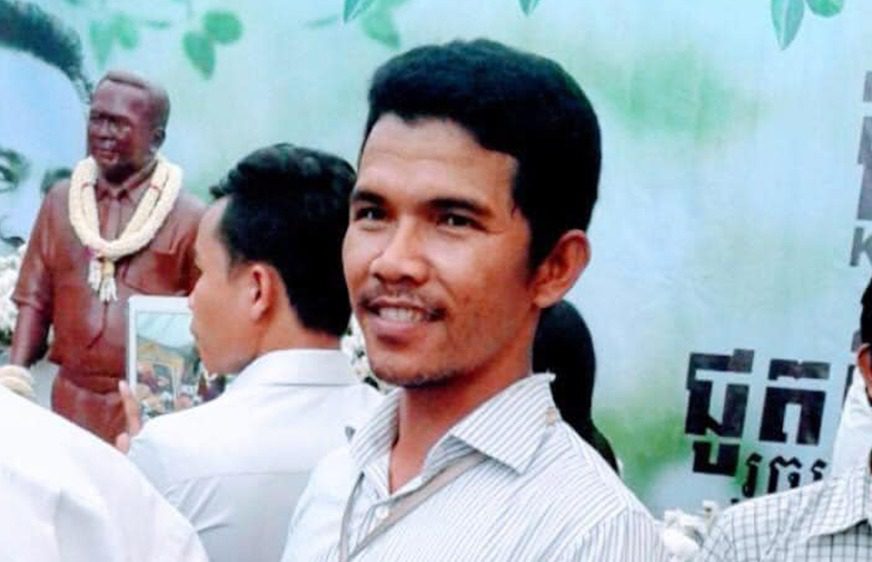 Choeun Sarim, a former Chbar Ampov II commune councilor for the CNRP during the 2019 anniversary of Kem Ley’s death in a photo from his Facebook page.

A former opposition commune councilor who now works as a tuk-tuk driver says he was assaulted by four men on Saturday, while the son of a jailed ex-CNRP official was also beaten on the same day.

Neither had filed police complaints as of Monday.

Choeun Sarim, 39, who formerly represented Chbar Ampov II commune in Phnom Penh’s Chbar Ampov district, said he was on his way back after dropping off a passenger in Kandal province when four men on two motorbikes stopped him and beat him up around 6:30 p.m.

One man hurled a stone at him that grazed his eye. A motorbike stopped in front of him, blocking his way. Finally, another man came from behind and struck him with a stick, Sarim said.

The men then quickly drove away from the scene, he said.

Sarim said he had not filed a police complaint because he saw people monitoring his family three days before the incident. He said he was being watched even after the attack and felt unsafe. He had escaped from his home, he said, fearing the attack could be related to politics.

Previous attacks against ex-CNRP members have gone unpunished, however, including the daylight assault against Din Varin in October. Varin was walking past a crowded market in Meanchey district when men passing on a motorbike slammed a brick against his head.

Sokseyha said on Monday that the search for the perpetrators was ongoing.

“It’s not that we’re not looking for [them],” he said. “All cases always receive attention.”

In a separate case on Saturday, the 16-year-old son of a jailed CNRP official in Kampong Chhnang province was beaten up by three men on a motorbike, his mother said.

The boy was in hospital and being inspected for bleeding in the brain, the mother said. She said she had focused on the boy’s care and had not reported the assault to police.

A 15-year-old friend of the boy said the two of them were riding bicycles in the province when the attack happened. They had stopped for a short rest at about 5:30 p.m. when three men on a motorbike stopped near them. They seemed drunk, and one of the men took a pole and beat up his friend without provocation, the 15-year-old said. He did not know the men, he added.

Provincial police chief Khov Ly said he had ordered an investigation as soon as he heard of the case.

The main opposition CNRP was controversially dissolved in 2017, and more than 5,000 local-level elected officials were removed from their positions. Dozens have been arrested since, as many continued to show support for the outlawed party.