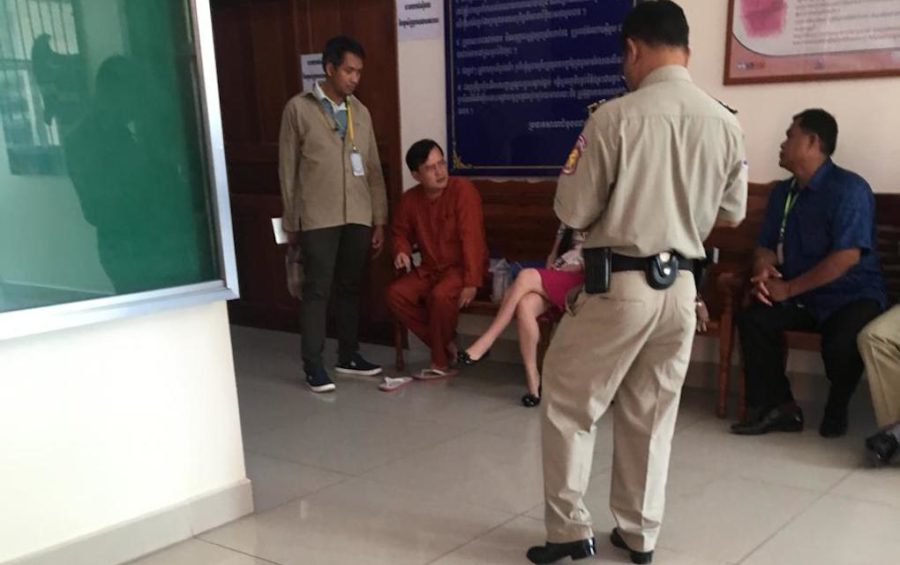 A former provincial governor on trial for allegedly murdering his mistress again maintained his innocence on Thursday, following a hearing in which the court delayed announcing its verdict.

Lay Vannak, the former governor of Takeo province who was expelled from the ruling Cambodian People’s Party following his 2018 arrest, was charged with the murder of Chev Sovathana, a CPP youth group member and National Assembly staffer with whom he admited having had an affair.

The body of Sovathana, who was 36, was found hanged in her Takeo home in January 2018 in what authorities originally ruled a suicide, but later reinvesitgated after her family raised suspicions about the crime scene, the Phnom Penh Post reported.

Vannak’s brother, deputy police chief of Takeo province Lay Narith, was also charged for the murder. Two others were charged with concealment of evidence in connection to the case. All four are currently on trial.

On Thursday, outside the courtroom at the Phnom Penh Municipal Court, Vannak swore on the lives of his family that he was innocent.

“I still strongly state that I am a clean person and I still keep my oath which was taken in front of the court,” Vannak told reporters.

“If I had killed Sovathana, may my family die, be destroyed and fall to the nine circles of hell and not be reborn forever,” he said.

Vannak earlier admitted to having more than a yearlong affair with Sovathana and claimed she had killed herself after he tried to end their relationship, the Post reported.

During the last trial hearing in July, and again on Thursday, Vannak said he trusted the nation’s justice system and hoped that the court would find him not guilty.

“I did not kill Ms. Sovathana. She killed herself,” he said in court in July, according to the Khmer Times.

Deputy prosecutor Phlong Sophal, however, said at the time that an investigation by Interior Ministry forensics experts and a police report from March 2018 showed that Vannak and Narith, his brother, killed Sovathana outside her home in Takeo’s Daun Keo City.

In addition to the murder charges against the pair, Choem Vuth, the husband of Sovathana’s maid, Chan Ry; and Men Sakmay, Vannak’s driver, were charged with concealment of evidence for assisting in the alleged cover-up of the murder.

According to the deputy prosecutor, after killing Sovathana, Vannak and Narith ordered Sakmay, Vuth and Ry to “bring the body back into the house and hang it with curtains in her room,” the Times reported. All four men have denied the allegations.

Vannak was transferred from the Takeo governorship to a position at the Interior Ministry in March 2018. The Phnom Penh Municipal Court charged him and Narith with murder in April of that year.

Interior Ministry spokesman Khieu Sopheak said at the time that Sakmay, the driver, had told police that Vannak had ordered him to hang Sovathana’s body to make it look like a suicide, the Post reported.

“The [initial] investigation was finished too quickly, and he is a governor, so we felt suspicious,” Sopheak said. “They took the body away very quickly.”

Sakmay and Vuth later said in court that their testimonies were coerced by police.

Presiding Judge Ham Mengse on Thursday said the court decided to delay the verdict announcement to allow time for further consideration due to the complexity of the case. He did not say when the verdict would be announced.

Colonel Meas Ten, the Takeo provincial police’s forensic investigations chief, who examined the victim’s body after her death, told VOD outside the court that he had already fulfilled his duties and submitted documents related to the investigation.

Ten declined to comment when asked whether the forensic evidence showed that the victim’s death was a suicide or murder.

Vannak, who has been detained for more than a year, told VOD that the charges against him and the three others were unjust.

He said the authorities’ follow-up investigation had been made three months after Sovathana’s death and witnesses’ testimonies to the police and courts had changed.

Asked whether he thought someone with malicious intentions was trying to unfairly blame him for Sovathana’s death, Vannak said it was possible, but declined to elaborate.