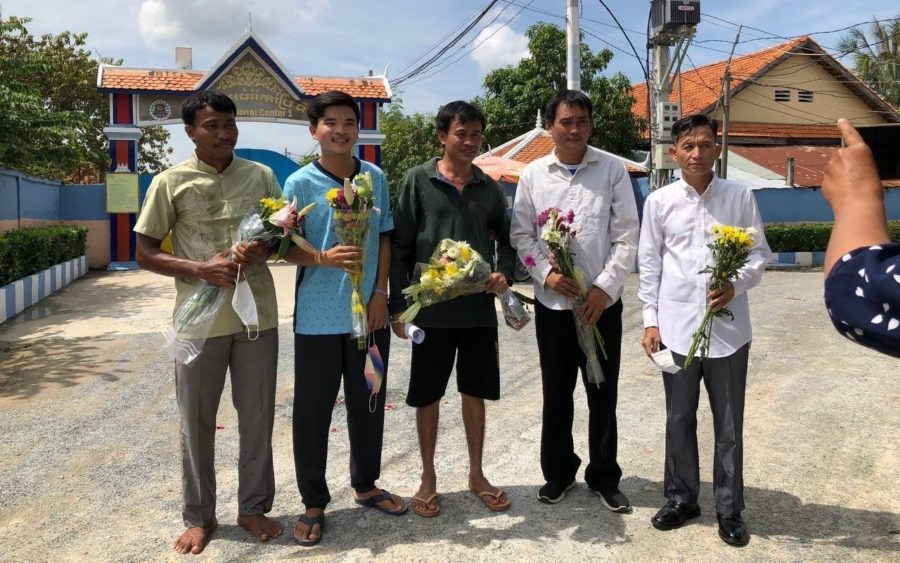 Political and youth activists in jail for over a year were released on Friday, the first in a series of anticipated releases as incitement sentences reach their end.

All five activists were arrested last year in relation to protests in support of jailed unionist Rong Chhun, who had issued a report that Cambodia was ceding land to Vietnam.

After spending over a year in pretrial detention, the activists were finally convicted and sentenced last week. Ten activists in all were part of their case, and they are all expected to be released this month.

Saray, who spoke to a VOD reporter from outside Prey Sar Prison, said it was unjust that he had to spend 14 months in prison for activism that was for the benefit of the country.

“We have to fulfill the duty of participating and thinking about the nation. Instead, it ended up with charges, especially [I] was charged with incitement to cause chaos to social security and so on,” Saray said.

Saray said he would continue his activism to improve social justice and democracy in the country.

“For me, there is no reason to stop because I have done nothing to destroy the country,” he said.

VOD spoke to his mother, Chab Yem, in September who was upset about her son getting defrocked and was confident that he had never done a wrong act.

“I was happy that my son became a monk for many years. I am sad that he was defrocked,” she said in September. “I used to see my son in red monks’ robes. Frankly, I feel very regretful but I don’t know what to do.”

“I miss him, and sometimes I sleep with tears.”

Lavy said that while it wasn’t pleasant living in prison it didn’t affect him because he was convinced he was advocating for good causes like democracy and human rights. Though he did not like the rice and soup provided in prison.

Being incarcerated also made him more aware of the injustices faced by other Cambodians in prison, Lavy said.

“I will still continue to do what is based on my wish to help solve social issues to become better,” he said.

Embassies and rights groups have long been campaigning for the environmental, political and social activists’ release, saying that their advocacy work should not be treated as a crime.