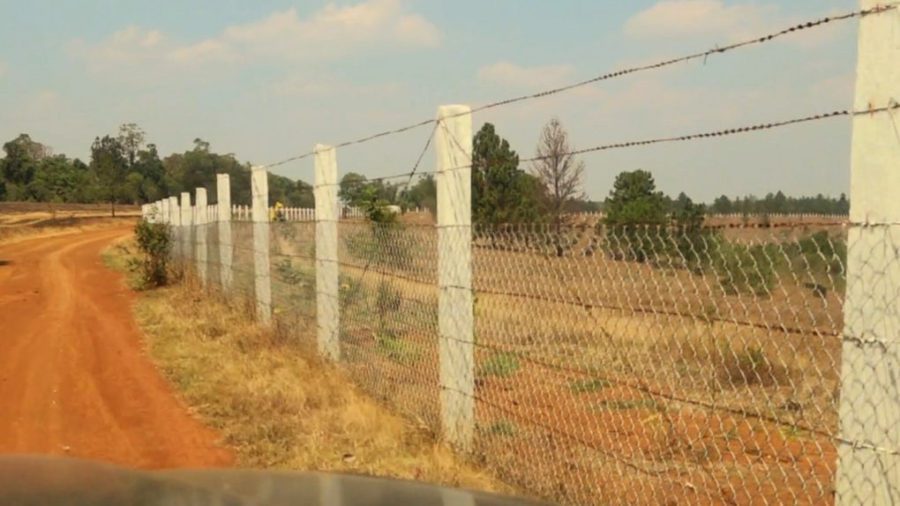 Fences on land in Mondulkiri. (VOD)

The Mondulkiri Provincial Court questioned four Bunong environmentalists for several hours on Tuesday over alleged defamation and incitement based on a developer’s complaint.

Kroeung Tola, Ploek Phyrom, Ploek Navy and Khvoeung Tum were summoned to appear on allegations leveled by Kak Ratana, director of Villa Development, according to one of the accused.

Phyrom said the case was a result of the foursome earlier filing a complaint against the company for deforestation, clearing state land and destroying resin trees in the Phnom Prich Wildlife Sanctuary. The area of forest in question, in Sen Monorom’s Sokdum commune, had been used by the local indigenous community for a long time before the company brought in heavy machinery to clear it, she said.

On Tuesday, court officials questioned them for several hours but they made no immediate decision on the case and let them go home, Phyrom said. The accused requested that the case be dropped, she added.

The company director, Ratana, could not be reached on Tuesday.

“We are protecting our land. They are planning to clear 100 hectares,” Phyrom previously said after receiving the court summons. “We make a living on that land.”

The community had already lost around 1,000 resin trees in the area, she said. “If we lose all of them, what can we do?”

Tola, another of the accused, is a prominent activist and coordinator for the Mondulkiri Indigenous People Network. He has faced previous legal actions against him, including fines for defamation.