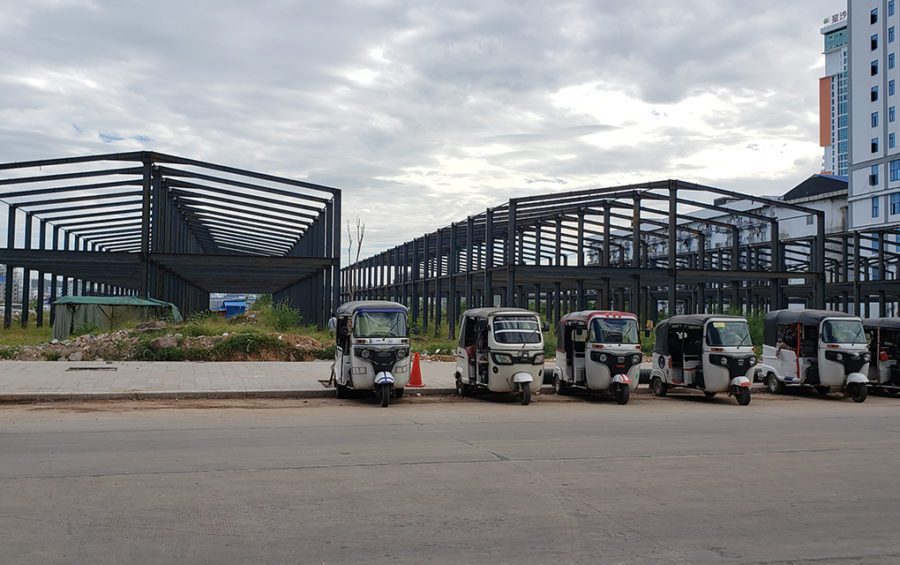 A row of tuk tuks park in front of building frames in Sihanoukville on December 2, 2020. (Danielle Keeton-Olsen/VOD)

The government is asking property developers to show leniency toward people struggling to pay installments on their gated homes and condominiums, even as a spokesman said a separate youth-led campaign calling for suspending microfinance repayments was illegal.

In a joint statement dated Monday, the National Bank and Finance Ministry said real estate companies should put in place measures to protect people who had bought borey homes and condos on installment plans, including exempting them from penalties for not paying on time and looking into possible reductions of installment conditions.

The statement said the measures should remain in place until March next year.

The two institutions had been advised by Prime Minister Hun Sen to discuss challenges facing the real estate sector and property buyers amid the Covid-19 outbreak, the statement said.

Tens of thousands of jobs have been lost amid the global pandemic, with key sectors such as tourism and garments manufacturing hit hard, causing widespread economic struggles.

Duong Seiha, who bought a borey home on installment in Phnom Penh, said he would ask the developers to reduce his monthly payments.

Sreng Vichet, who bought land on an installment plan along National Road 3, said he needed the reprieve.

“My family is facing hard living conditions because of Covid-19,” Vichet said.

“Those who are applying for a reduction or delay of payment, he or she must have proof or a letter to clarify their paycheck being cut or loss of job, etc.,” Chou said, adding that those in the informal sector would need to reach an understanding with lenders. “The bank and the owner of the borey must … understand their income.”

Meanwhile, a group of young people are campaigning to collect thumbprints from workers and other members of the public to petition Hun Sen to suspend loan repayments to microfinance institutions and banks as well as payments for water and electricity bills.

Keo Tith Lida, a youth activist and president of the Women’s Association for Society, said several youth groups began a campaign on March 12 to collect thumbprints in Phnom Penh and Kandal’s Takhmao city about ways to ease the financial burdens on people during Covid-19, and had more than 200 signatories as of Monday.

“If [Hun Sen] can help with any point, it will mean greatness for the people. It will help people in difficult times,” she said.

Pich Tola, a young man living in Takhmao, said he was a supporter of the campaign.

“This petition is my request as well as the people’s. I am one of the people,” Tola said. “Doing this is called helping find solutions to help each other.”

However, government spokesperson Phay Siphan said he considered the activities of the youth groups to be illegal and asked them to stop the campaign.

“Firstly, the government has thought of a solution for all of us, but the main priority is to fight against the Covid-19 outbreak in the community. Secondly, the policy is that we maintain macroeconomic stability,” Siphan said.

“As for the young people who are trying to collect signatures, it is illegal. It is like forcing or creating another movement,” he said. Several youth activists are currently in jail after protests last year centered around a unionist’s comments on controversial Vietnamese border land.

Kaing Tongngy, spokesperson for the Cambodian Microfinance Association, said microfinance institutions could not suspend repayments in general, only for specific cases after an appraisal.

Since a year ago, financial institutions had restructured more than $1.4 billion in loans to 280,000 customers, he said.

“We cannot use a principle to apply to 1.2 million customers. We must look at the actual case of each customer,” he said.

The minor Grassroots Democratic Party on March 16 also issued a statement urging the government to intervene with microfinance institutions and banks to delay payments in locked down Covid-19 hotspots.