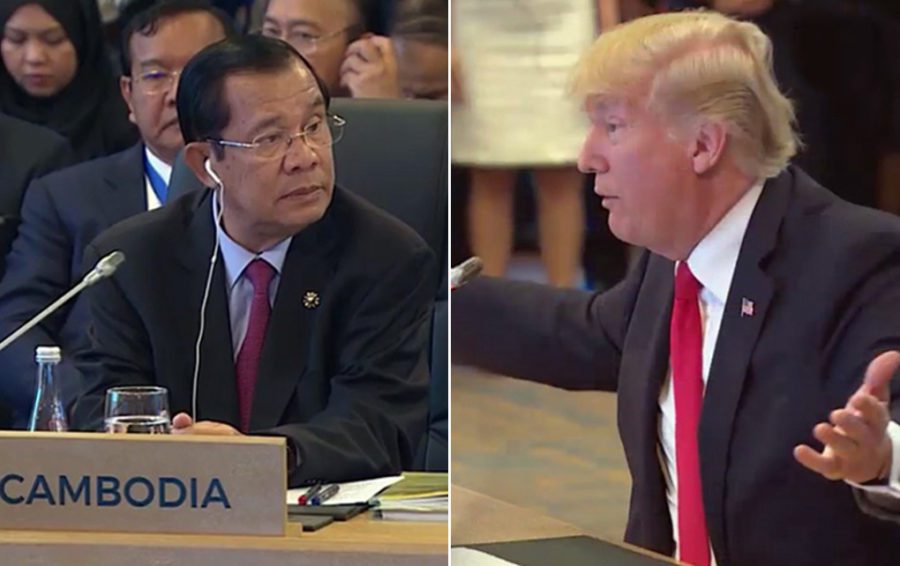 Cambodian Prime Minister Hun Sen and US President Donald Trump at the ASEAN Summit in Manila in November 2017.

Cambodia and the U.S. have been through “ups and downs” together, but their bonds of friendship can still be renewed, Prime Minister Hun Sen wrote in a letter to U.S. President Donald Trump.

“You can probably appreciate our struggle to find full peace,” Hun Sen wrote, referring to Cambodia as “a very young democracy.”

“I appreciate your understanding and patience in that respect.”

Trump had written to Hun Sen on November 1, asking him to “put Cambodia back on the path of democratic governance.”

“As a first step, I hope you will re-evaluate certain decisions taken by your government,” Trump wrote.

But those were not the words Hun Sen responded to in his own letter dated November 26.

Relations between the two countries “have gone through periods of ups and downs,” Hun Sen said. But they should not “become hostage [to] a few dark chapters.”

“There are so many other beautiful chapters that are worth nourishing,” he said.

Tensions between the two countries have flared in the past two years. Hun Sen accused the U.S. of trying to spark a “color revolution” in an attempt to overthrow the government. Authorities arrested opposition leader Kem Sokha in September 2017 on charges of treason for allegedly conspiring with the U.S.

Hun Sen’s ruling CPP swept a national election in July last year in the absence of a viable opposition, and the U.S. criticized the poll as neither free nor fair. In bills tabled in Congress, U.S. politicians have demanded that Sokha’s opposition CNRP be restored. Hun Sen said they were meddling in domestic affairs.

Trump’s letter pointed out that the U.S. would respect the will of the Cambodian people, “and we do not seek regime change.”

Hun Sen took the words as rapprochement. “I am foremost reassured by your explicit statement,” he wrote back.

“[Y]ou seek genuine engagement to pursue democracy, individual liberty and the rule of law rather than through regime change.”

Em Sovannara, a political analyst, said Hun Sen appeared to be “softening,” and his letter could bode well for a reconciliation.

“It is a positive step,” Sovannara said.

However, Sophal Ear, associate professor of diplomacy and world affairs at Occidental College in Los Angeles, said Hun Sen was ignoring Trump’s message insinuating that Cambodia had gone through a “demolition of democracy.”

“The first step to recovery is to admit you have a problem. The letter from Hun Sen does no such thing,” Ear said.