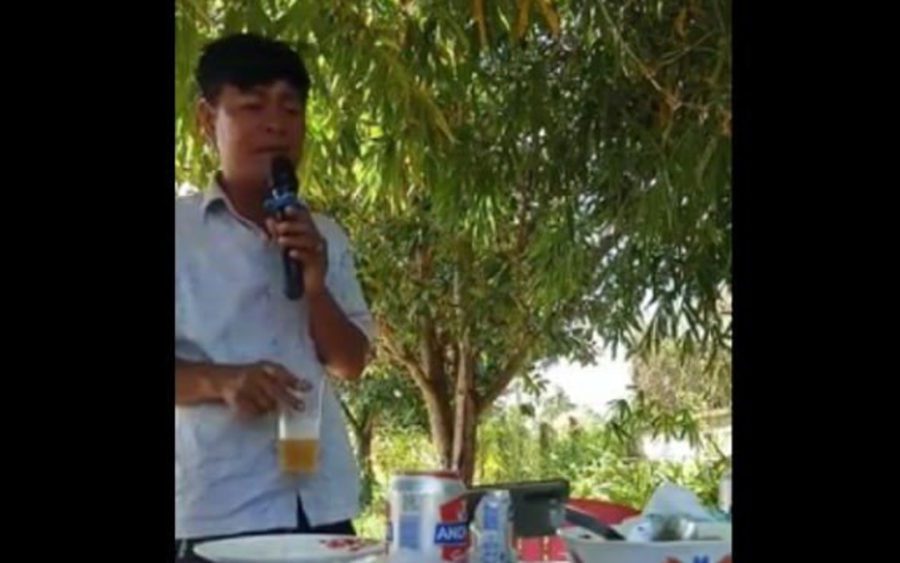 Chheuteal Chrum High School principal Panh Putheara in a screenshot of a video posted to Facebook by his deputy on January 8, 2021.

The principal of a Takeo province high school says he has sued five former students for defamation as a warning after they posted critical comments on a Facebook video of him drinking and singing karaoke.

Chheuteal Chrum High School principal Panh Putheara said he was insulted by the ex-pupils calling him “neak” — a Khmer word that means you, but is considered as lacking respect — and would donate the potential 50 million riel in damages he is seeking for mental suffering, or about $12,500, to the Kantha Bopha Children’s Hospital and school constructions if he wins the case.

The video was posted on January 8 by the school’s deputy principal and shows Putheara standing and singing karaoke behind a table that has some beer cans on it. Putheara said this week that he was not drunk, and it was at home during the holidays in his private time as a “normal citizen.”

The five ex-students’ comments have been deleted from the Facebook video, but Putheara saved screenshots of two of them.

In one, Thun Piti, 19, says: “Sorry for the bad comments, teacher, but I would like to request that there be no posts on Facebook, because it is not a good model for many students.”

In another, longer comment, Pan Nak, 26, says wine is one of Buddhism’s four evils.

“You are a teacher, you are a principal, you are an educator, you are a role model for children! Do you think this video is suitable for public posting like this? How many tens of thousands of children are under your leadership and are receiving bad influence from you?” Nak writes.

“I want to tell you that children who go to school have hopes, they need a guide, they need you to take their hand, they need a light to reach their goal. Please consider your actions and professional ethics.”

Putheara said he had sued the five ex-students for defamation because they insinuated that he drank to excess.

“They should apologize, first of all, [because] they insulted me, called me ‘neak,’ neak every time, neak should not commit the four evils,” he said. “I can’t accept it.”

He asked the five ex-students to come to the high school, in Bati district’s Kraing Leav commune, on January 16 to apologize to him and other teachers, but they did not show up, he said.

“I do not want anything, just go to court and apologize to know your own mistakes,” Putheara said. He wanted the apology in writing, he added. “It’s a warning to not have it happen a second time.”

Piti, one of the sued ex-students, said his family negotiated with the principal, offering some money and apologizing on his behalf, but Putheara had not accepted.

Piti said he had deleted his comment, and didn’t know what more Putheara wanted.

Ly Chamroeun, 24, another of the ex-students, said he had received a summons to be questioned at the Takeo Provincial Court on February 2, but was given only three days’ notice and asked for a delay.

Lawyer Lois Kimyuong said he had volunteered to defend all five after hearing the facts of the case.

“I acknowledge that all the students were critical of the principal, but their comments were meant to be constructive,” Kimyuong said.

Correction: An earlier version of this article misstated the commune the school is in.