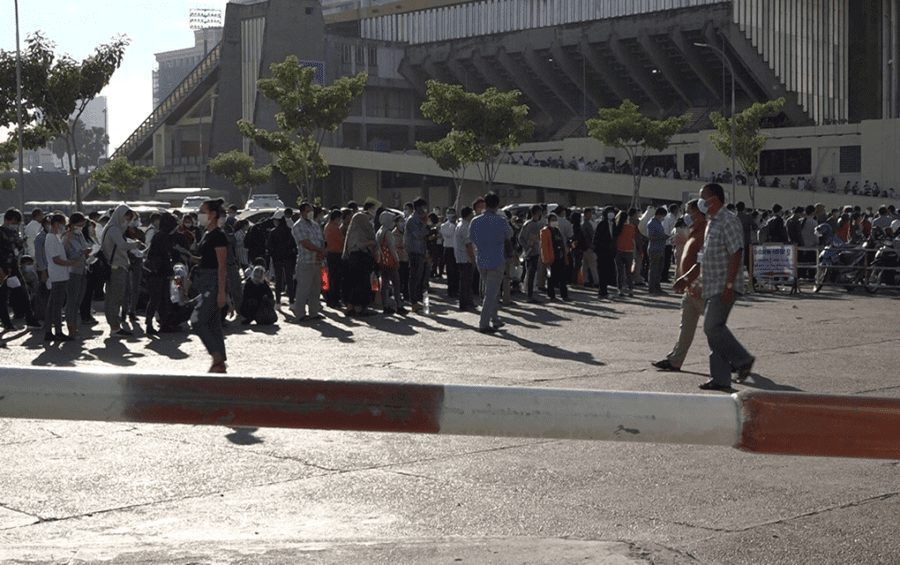 A line of people waiting at the Covid-19 testing center at Olympic Stadium in Phnom Penh on December 8, 2020. (Hy Chhay/VOD)

All visitors from Phnom Penh should be recorded and tracked, Kampong Cham province’s administrative chief said. Kampong Chhnang residents who commute to the capital should be prepared to potentially be quarantined, its governor said.

In Svay Rieng, two women arriving from Sihanoukville and looking to cross the border sparked the closure of a hotel and quarantining of staff after the women tested positive for Covid-19. An infected Phnom Penh tuk-tuk driver who attended a housewarming party in Tbong Khmum province caused two schools to be shut.

Amid Cambodia’s worst Covid-19 outbreak to date, provinces outside the cluster’s urban epicenters of Phnom Penh and Sihanoukville are keeping a close watch on arrivals, hoping to prevent the disease’s spread across provincial borders.

“We have instructed all authorities,” said Kampong Cham provincial administrative head Khorn Pros on Wednesday. “Record their identities clearly because when there is any problem, it is easy for us to investigate.”

Authorities should keep an eye on visitors from Phnom Penh, as well as those recently returned from Thailand, Pros said.

Last week, a visitor from Phnom Penh tested positive for Covid-19 after coming to the province for a wedding in Kang Meas district, Pros said. The man was a suspected contact of the “February 20” cluster who had already had a sample taken for testing when he came to Kampong Cham, he said.

“The one who has had a sample taken, [they] should not allow him to walk. When we take a sample, it means he is suspicious. [They] allowed him to walk and the result showed he was positive,” Pros said. “It is dangerous for other people. After taking a sample, [they] should keep them in one place. Like in Kang Meas, he had a sample taken and he was not quarantined, and he came to eat at the wedding and it showed up positive. It causes risks like this to the authorities.”

The man’s suspected contacts had been traced and so far all tested negative for Covid-19, he said.

The driver had brought two children, who visited two schools, and now both locations had been temporarily closed down, Vannak said.

So far, 62 people in the province had been asked to quarantine, including some people who arrived from Preah Sihanouk province and were suspected to be a contact of the cluster, he said.

“We are afraid that there will be an infection in the community,” Vannak said.

Cambodia currently has 396 active cases of Covid-19 following a surge as part of the February 20 cluster. Svay Rieng on Wednesday recorded its first two cases of Covid-19, both Vietnamese women staying in quarantine at a hotel in the province.

Keo Ratha, director of the Svay Rieng provincial health department, said the two women had traveled up from Sihanoukville.

“We can say that the people at the hotel are affected. The hotel residents, the workers have all had a sample taken for testing this morning,” Ratha said. Some other suspected contacts were yet to be tested, he added. “We just put them in quarantine.”

Deputy provincial governor Ros Cheanich said the women had been looking to return to Vietnam, but did not have the proper health documentation to be allowed to re-enter.

“They went to the border gate and we sent them to a hotel in Bavet city,” Cheanich said.

Meanwhile, in Kampong Chhnang, governor Chhour Chandoeun said its authorities’ eyes were on commuters who worked in Phnom Penh.

“Our focus is on Phnom Penh city,” Chandoeun said, “when [people] have their house in Kampong Chhnang and go work in Phnom Penh, like in Chinese restaurants.”

If residents’ workplaces were suspected to be part of the February 20 cluster, authorities would need to take action, he said.

“We need to control them and ask them to be quarantined and take their samples immediately,” he said.