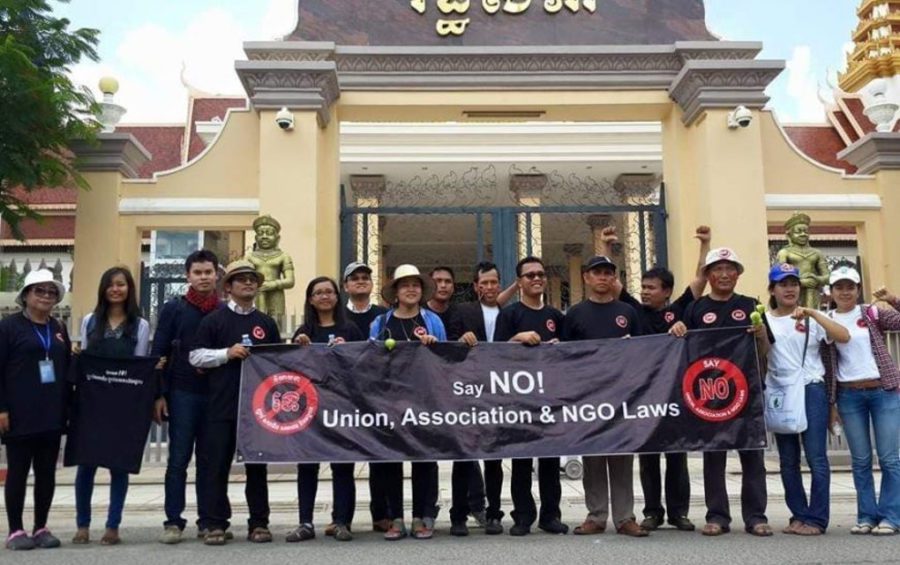 Civil society organization members gather in front of the National Assembly to submit a petition demanding it drop the NGO law in 2015, in a photo posted to the Facebook page of Sar Mory, vice president of the Cambodian Youth Network.

The Interior Ministry will discuss amendments to the controversial Law on Associations and Non-Governmental Organizations next week, it said on Monday.

According to a statement issued by the ministry, a consultative meeting will take place next Monday following the requests by civil society organizations to amend the law.

Introduced in 2015, the law has drawn criticism by national and international organizations for allegedly suppressing freedom of speech and assembly by imposing restrictive requirements on NGOs.

The meeting will be coordinated by a government working group, the statement said.

Korn Savang, a coordinator at election monitor Comfrel, said his NGO and 19 other organizations had submitted a joint letter in September to ask for the law to be amended. He said he had not received a response yet, but would be willing to participate in the meeting should he be invited.

“We cannot conclude how this law will be changed, but we still hope that the ministry will have a look again after this law has already been introduced and implemented. … The Ministry cannot just do it for a good look,” Savang said.

Civil society organizations have asked for the amendment of nine articles. One of the most controversial articles is one that requires NGOs and associations to “maintain neutrality” toward political parties, which civil society actors have feared could be used for political purposes.