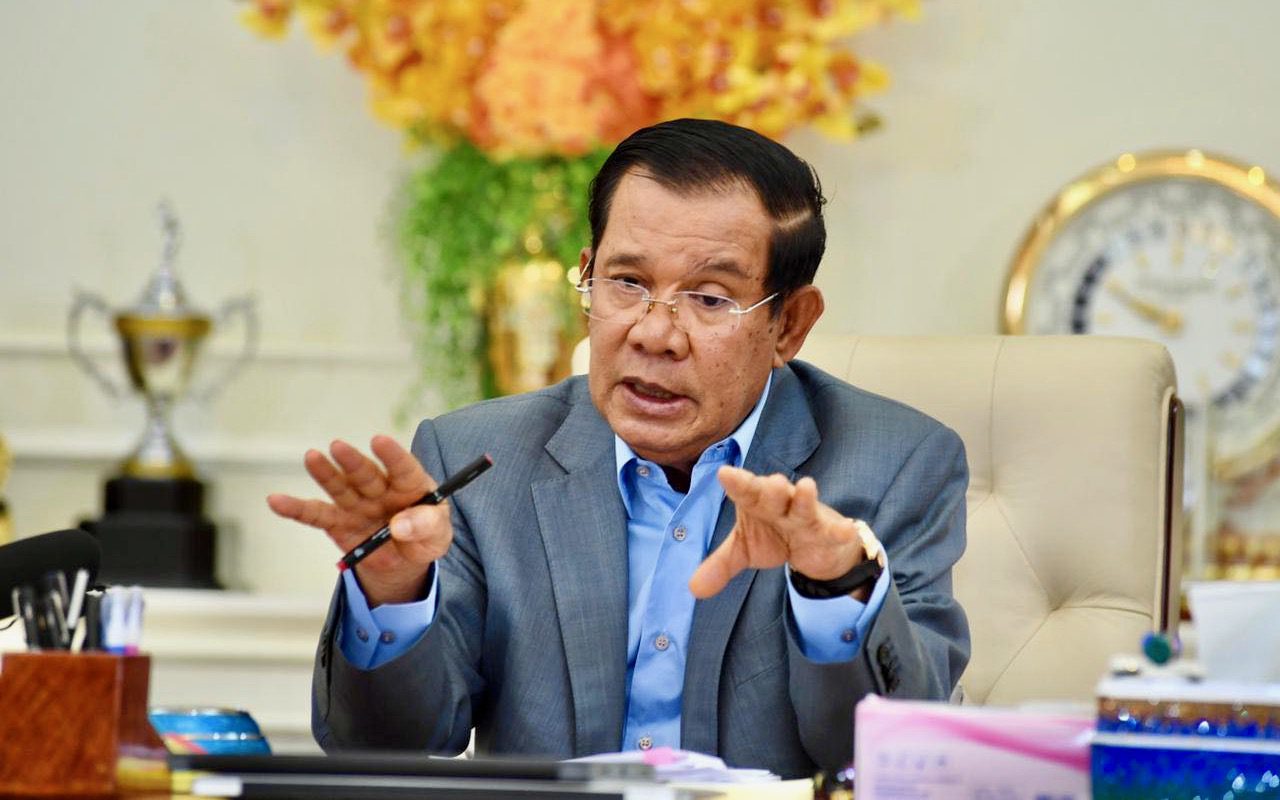 Hun Sen in a photographed posted on Tuesday to his official Facebook page.

A slew of new government decrees has privatized seven public lakes and waterways in Kandal and further carved up Phnom Penh’s Boeng Tamok. One local commune chief is threatening to resign over the sudden handover of a lake his residents rely on.

“This is a state lake. How can it be like this?” said Oum Chhun Sreng, Russei Chroy commune chief in Kandal’s Mok Kampoul district. “We are lower and we don’t know anything. Why do they make this private? Do they not have a place to develop and so they come to develop on other people’s lakes?”

Russei Chroy’s Boeng Chon Len lake is one of seven plots of state land in Kandal — alongside four in Phnom Penh and another in Kratie — that have been privatized in the latest release of governmental sub-decrees.

“If you have any evidence to send to me, I will send it to my people,” Chhun Sreng said. “This is my people’s lake. … How could they take people’s land that they have used since their ancestors? Do they not want water to flow? Who decided to build on this?”

The sub-decrees are all signed by Prime Minister Hun Sen, and continue a mass land privatization drive that has carved up lakes and wildlife sanctuaries across the country. Unlike most recent sub-decrees, the ones for Kandal did not name the recipients.

“Who is the owner of the land? People currently live on that lake, and people around the lake use it,” the commune chief said. “Currently we survive through this lake. Without this lake, we will die. They catch fish and cultivate on the lake.”

Though rarely speaking out as strongly as Chhun Sreng, many local officials across Cambodia have spoken of surprise and powerlessness at the transfer of public or protected land to private individuals — often high-ranking officials or their family members.

In Preah Sihanouk, a district land management official and even the agriculture minister threw up their hands when land was transferred to a business associate of Hun Sen’s daughters. “This is government land, and when Samdech [Hun Sen] makes a decision, what is there to do?” Agriculture Minister Veng Sakhon said in late 2020. “There are so many. … I don’t know much,” said Prey Nob land management bureau chief Khuon Kim Sin at the time.

The currently planned destruction of Kandal’s protected Phnom Tamao forest — adjacent to a zoo and home to rare animals — has been similar: A commune chief said he had no authority over the decision and a Forestry Administration official said it was out of his hands.

“If the government does this, there will be surprise across the country. I don’t know what to do. I can only tell the voters, and I will talk with 5,000 to 6,000 families,” said Chhun Sreng on Thursday. “I will submit my resignation too, and I will hold a press conference in the middle of the lake and I will resign.”

The land being privatized on Kandal’s Boeng Chon Len spans 89 hectares. The other 11 plots privatized in documents released on Wednesday — though signed earlier in the year — range from very small areas in Phnom Penh to 215 hectares in Kratie. Six other plots in Kandal are all lakes or waterways:

In Phnom Penh, 61 square meters in Prek Pnov district was handed to Seng You An, director of the Interior Ministry’s logistics and finance department, who declined to comment on Thursday.

Some 185 square meters in Prampi Makara’s Mittapheap commune was transferred to Hour Hub, a navy commander linked to the death of environmentalist Chut Wutty, and his wife Ngor Nguontheary.

The Phnom Penh municipal administration received 282 square meters, while an individual whose background could not be immediately discerned, Chhun Kimheng, got 26.5 square meters, both in Prek Pnov.

Meanwhile, 215 hectares of forest land in Kratie’s Snuol district was transferred to two people, Moeung Uy Hor and Moeung Uy Ang, identified as owning a marble business. Svay Chreah commune chief Van Doeun said: “I need to look into it first and I cannot answer anything about it yet. I need to make calls first. They are people in a company here.”