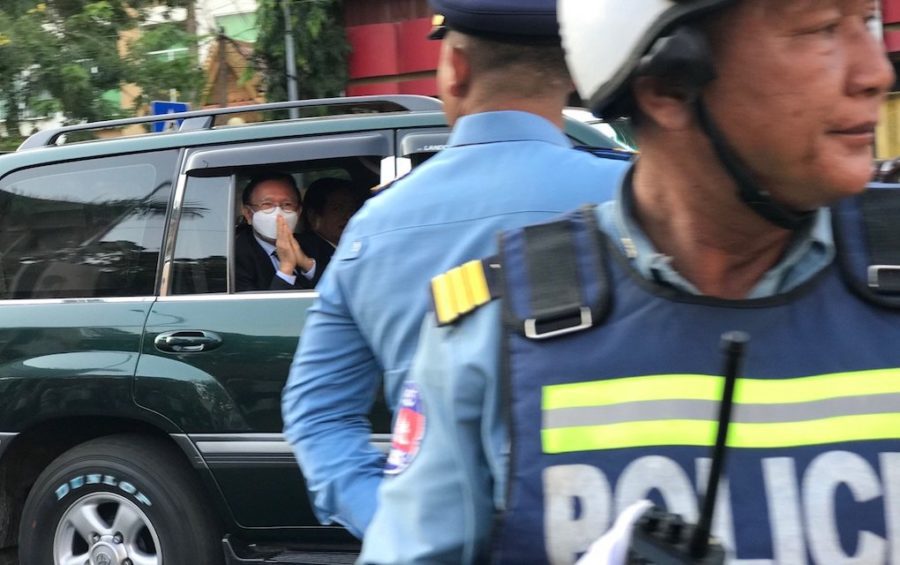 Opposition leader Kem Sokha was questioned in court on Wednesday about who initiated discussions to merge his former party with the Sam Rainsy Party, why the parties joined together to form the now-banned CNRP and whether foreigners were involved in its creation.

Sokha, president of the dissolved opposition CNRP, is accused of conspiring with the U.S. to overthrow the Cambodian government. He was arrested in 2017, jailed for a year and later released to de facto house arrest.

In November, Sokha’s court restrictions were eased, however, he is still not allowed to leave the country or engage in political activities. He faces up to 30 years in prison if convicted.

In the fifth week of Sokha’s trial at the Phnom Penh Municipal Court, the politician said he could not recall who first suggested merging his Human Rights Party (HRP) with CNRP co-founder Sam Rainsy’s SRP.

The decision to come together stemmed from HRP’s poor showing in the 2008 national election, people’s requests for a merger, and the parties’ shared values, not due to support from foreigners, Sokha said in response to questions from deputy prosecutor Vong Bunvisoth.

“Everything was due to the people’s will and the result we got from the 2008 election. We did not expect that we would get so little [votes] so we started to think and people shared their ideas,” he said.

By the next national election in 2013, the HRP had merged with the SRP to form the CNRP, which narrowly lost to the CPP.

After making electoral gains again in the 2017 commune elections, the CNRP was dissolved by the Supreme Court in November 2017, two months after Sokha’s arrest.

Bunvisoth continued to question Sokha about who initiated discussions to merge the parties, at one point telling the opposition leader that he was not clearly answering the questions.

Sokha disagreed. “I clearly understand. It’s you who is not clear,” he told the prosecutor.

Sokha again said that after the 2008 election supporters requested that the two opposition parties join together because there was not enough support for the HRP.

Bunvisoth asked Sokha about how the CNRP was supported.

Sokha said the party garnered support from Cambodian people and both HRP and SRP representatives.

“No foreigner participated,” he said.

The deputy prosecutor also asked why the more popular SRP, which won double the votes of HRP in the 2012 commune elections, was willing to merge with HRP.

Sokha requested that the prosecutor pose the question to Rainsy himself.

Rainsy, who lives abroad and faces various criminal charges that he says are politically motivated, told VOD that voters had indicated their desire to see a “merger of democrats,” with people expressing clear support for a union at forums held by both SRP and HRP inside and outside Cambodia.

“Leadership of both parties held numerous meetings in Cambodia and the final merger was officially announced in Manila,” about one month after the June 2012 commune elections, he said in an email.

“Kem Sokha and I put democracy first, not personal benefits,” he added.

Asked if any non-Cambodian parties, actors or foreign governments were involved in discussions about merging SRP and HRP, Rainsy said he had “initiated and promoted and held many discussions with organizations outside of Cambodia,” including in Europe, the U.S., Australia, the Philippines and Thailand, as a member and officer of international democratic political party organizations the Council of Asian Liberals and Democrats, and the London-based Liberal International.

In court, deputy prosecutor Bunvisoth also asked Sokha why the two parties did not dissolve after creating the new CNRP, and when and where they started negotiations to merge.

Sokha said HRP and SRP members held National Assembly seats at the time, which they would have lost if the parties dissolved themselves.

He said he didn’t remember when the parties started discussing a merger.

“The important thing, you say you do not remember,” Bunvisoth replied.

Sokha said issues affecting the country and the Cambodian people were more important.

Earlier in the morning hearing, government lawyer Ly Chantola questioned Sokha about his relationship with Rainsy, and requested that the court show a two-minute video of Rainsy giving a speech on June 4, 2011 in the U.S. state of Massachusetts.

In the video, Rainsy speaks of ousting Hun Sen from power.

“We need some support and reliance to have an uprising,” Rainsy says.

“I would like to appeal to the Cambodian people and armed forces to topple Hun Sen from his position,” he continues, adding a request to the military to turn their guns on the prime minister.

Sokha denied the allegation, saying that the CNRP followed its party principles, the law, human rights and democracy.

About six weeks after Sokha’s September 2017 arrest on charges of conspiring with a foreign power, Hun Sen pointed to the 2011 video as further evidence of a CNRP plot to overthrow the government, the Phnom Penh Post reported at the time.

“[Rainsy] said that Hun Sen’s regime was about to collapse, and we need advice and support to make the rebellion. And the armed forces will turn their weapons against the dictator Hun Sen’s regime,” Hun Sen said, according to the Post.

The premier claimed that Rainsy’s speech showed that the CNRP was taking orders from foreign governments to target his government.

During the afternoon trial proceedings, Sophal continued to question Sokha about the content of Rainsy’s 2011 speech, suggesting that it showed Rainsy’s true colors — an alleged intention to overthrow the government.

“Have you followed through on these principles as Sam Rainsy had said?” Sophal asked Sokha.

Sokha did not answer but instead asked the court to play a video of one of his own speeches from 2012 in which Sokha vows not to make any Cambodian an enemy and to maintain democratic principles.

Sophal asked again if Sokha’s stance was the same as Rainsy’s.

“I have informed you a few times already. I follow the principles of democracy and would not overthrow by violence,” Sokha said, adding that the HRP and CNRP followed tenets of nonviolence.

Prosecutors, government lawyers and defense lawyers also debated for about an hour on Wednesday morning over the value of using evidence, including photos, from the Facebook page Koun Khmer, which is known for sharing posts that are critical of the CNRP.

Presiding judge Koy Sao said that just 10 percent of the trial’s total evidence came from the anonymous Facebook page and that penal judges would discuss the evidence’s value, before telling lawyers to table the discussion.

The trial resumes on Thursday.