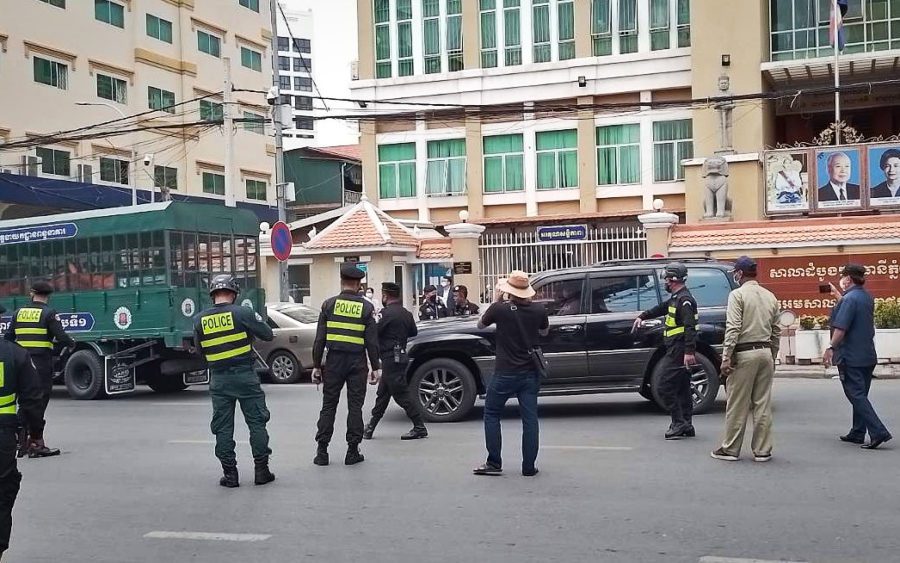 Kem Sokha leaves on an SUV from the Phnom Penh Municipal Court on March 30, 2022. (Ouch Sony/VOD)

Prosecutors in the Kem Sokha trial resumed questioning him about events in the run-up to the 2013 national election to support their treason charge, though judges wanted to proceed with cross-examination about the election and its aftermath.

The court went back to questioning events from the politician’s professional life that the prosecution argues proves he conspired with foriegn powers. The prosecution says Sokha’s crime of treason spans a 25-year period, starting from 1993 and ending with his late-night arrest in September 2017.

Judge Koy Sao said he hoped to begin questioning about facts beginning from the 2013 national election and the aftermath. Court questioning had ended at that point when the trial was delayed in March 2021 because of an increase in Covid-19 cases. The trial resumed earlier this year.

However, prosecutor Plang Sophal said he wanted to question Sokha about events preceding the election, such as the formation of the CNRP, its structure and policies.

This was met with objection by the defense team and Kem Sokha, who said this part of the questioning had been completed.

The prosecution then proceeded to question Sokha about how he built grassroots support, why he was made vice president whereas Sam Rainsy ascended to presidency of the CNRP, and the party’s policies.

The defense and prosecution also sparred over whether Sokha’s answers were sufficient, with the latter arguing they were not good enough.

Defense lawyer Ang Udom stood up and said the trial was moving in the wrong direction and that the prosecutor should not push to get an answer based on what he wants and that this was not appropriate.

However, prosecutor Chhay Hong pressed on and asked Sokha about his use of the word “change” in speeches he made to supporters. The word was often chanted by supporters of the CNRP during political rallies and meetings.

“For this word, I already answered what the change is going to be,” Sokha said. “When we lead the country, we will do what has not been done and we will do it better than before.”

Hong then justified the repetition of questions because there were new “audience” members in the court.

The trial will resume on April 6.