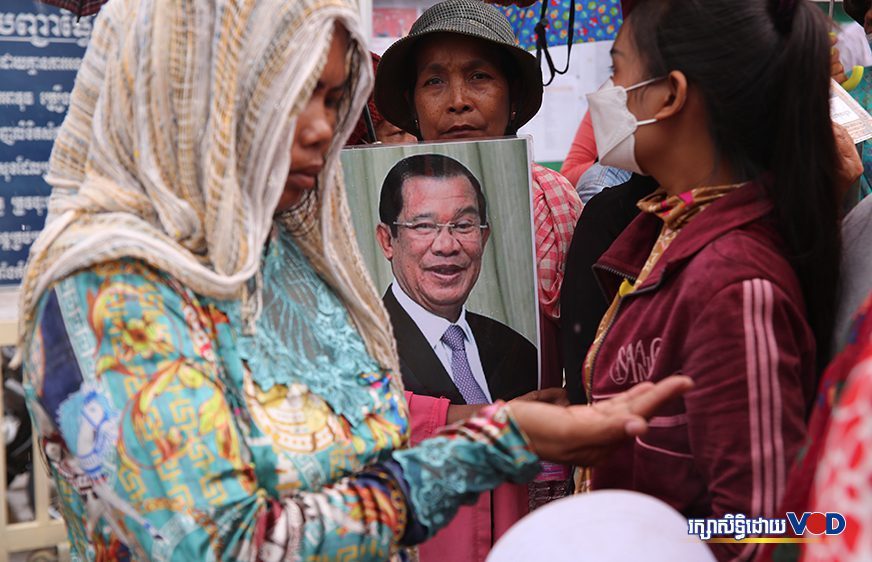 Protesters outside Phnom Penh’s Canteran Apparel on May 23, 2022. (Hean Rangsey/VOD)

Unionists from four factories say the Labor Ministry has been unable to solve disputes with their employers that have stretched on for months.

Workers from four factories in Phnom Penh and Kampong Speu say they have still been unable to make progress after their employers have terminated workers without sufficient compensation or blocked workers from forming unions. The factories in dispute include recent Puma and H&M suppliers.

Duong Tola, a worker who was recently fired from Eastcrown Footwear Industry in Phnom Penh’s Meanchey district, said he and eight other workers were terminated in October by the Puma supplier after attempting to form a union.

The workers asked for a resolution from the Labor Ministry, but Tola said factory representatives kept delaying the meeting.

“The factory’s intention is [to work] against the registration of the union,” said Tola. “Delaying [the reconciliation] also breaks down the morale of the workers who are waiting for the registration and solution.”

According to Tola, the Labor Ministry on Friday asked workers for another reconciliation meeting, but he hadn’t heard any response yet.

The Cinlon International factory fired three workers in June for attempting to create an independent union, leading the Labor Ministry to write a letter urging the factory to rehire the workers. However, Sethyneth said the factory had since refused.

“As I said, we fired them not because of discrimination against the union,” she said. “There are a lot of workers who got fired because the factory doesn’t have any work.”

Sen Korn, a former tailor at the factory, said around 808 workers had been terminated on September 16 without any warning and with only partial severance.

Korn said the workers had filed a complaint to the Labor Ministry, but officials had yet to offer a solution, suggesting instead that the workers take the company to court.

“We filed a complaint. … Silence. We didn’t get answers to anything, and workers are still waiting for a solution,” Korn said.

Hung Wah supplied H&M in 2018, according to trade database Panjiva. H&M still lists the factory as a supplier as of Monday.

Meanwhile, workers in Phnom Penh’s Pur Senchey district have been waiting more than eight months for further compensation after the beleaguered Canteran Apparel shuttered without notice in May, said unionist San Sophal.

The employers “ran away,” she said, and the extended occupation of the factory grounds took a toll on some workers.

Labor Ministry spokesperson Heng Sour did not respond to requests for comment, nor did representatives of the Canteran and Hung Wah factories.