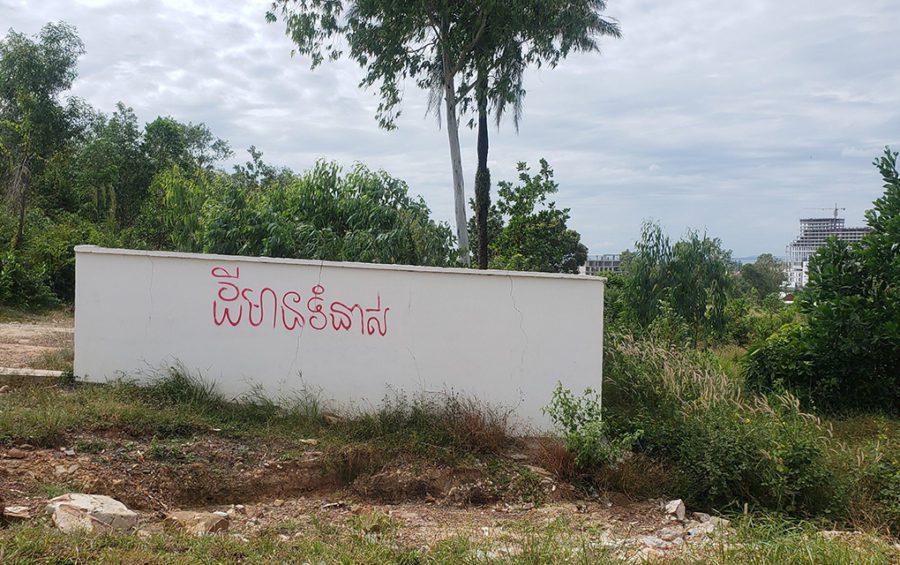 A fence with the Khmer word for “disputed” written in red, in Preah Sihanouk province’s Prey Nob district on December 1, 2020. (Danielle Keeton-Olsen/VOD)

A community representative in a Preah Sihanouk land dispute was arrested in a case in which three Coalition of Cambodian Farmer Community members were also sentenced to jail last year, and which has previously been reported as involving Deputy Prime Minister Yim Chhay Ly.

Sam Sophat, who the coalition said had represented 68 families in a dispute in Prey Nob district, was arrested on Sunday based on a court warrant from March, said district police chief Hour Yay.

According to a Supreme Court document, Sophat was found guilty by the provincial court on June 17 last year, alongside Sam Samol, Svay Sareth and Nhek Sara. The verdict was upheld by the Appeal Court and Supreme Court last year.

Coalition of Cambodian Farmer Community director Theng Savoeun said the three others were members of the coalition, but had not been sent to jail.

He said they had all been sentenced under Article 97 of the Forestry Law, which lists 10 different crimes carrying jail terms of five to 10 years.

According to Savoeun, the case involved the Than Sour company and one of its developments in the area. The company could not be found on Commerce Ministry records, but the Phnom Penh Post reported in 2016 that the company was managed by Deputy Prime Minister Yim Chhay Ly.

Cheap Sotheary, provincial coordinator for human rights group Adhoc, said she had attended last year’s court trial, where Sophat and the others were accused of removing trees from land claimed by Than Sour. But Sophat had argued that he owned the land and that he had planted trees, not removed them. The case had been brought to court by the Forestry Administration, she said.

Sotheary added that Than Sour was involved in several land disputes in the area.

Long Lun, Sophat’s lawyer, said his client was also involved in several lawsuits, and he was not clear on the arrest.

Sophat’s brother Sam Sopheap said Sophat had been called into the commune police station then arrested by district officers.

“Five criminal police officers came to arrest him. They took him to the district police office and one hour later sent him to the provincial police and to the prison yesterday at 11 a.m.,” Sopheap said on Tuesday.

Savoeun, the CCFC director, said the dispute was about people living on forestry land, and the Forestry Administration should grant land to them rather than prosecute them.

Chhay Ly, the deputy prime minister, is also chair of the Council for Agriculture and Rural Development, a governmental body established in 1998.