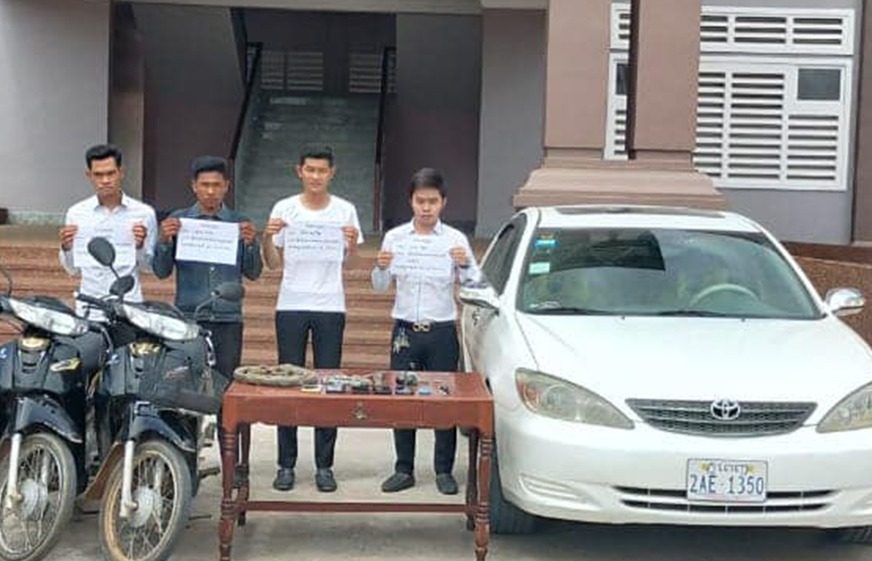 Kampong Chhnang province’s military police commander said companies must first go through the courts before confiscating any debtors’ possessions, after authorities arrested four leasing company officers for breaking a lock as they tried to take away a motorbike with overdue payments.

Dum Sakhorn, chief of Cholsa commune’s Kampong Ba Srov Tboung village in Cholkiri district, said he was helping other villagers with their debt problems on Tuesday when he heard shouting outside.

He said he climbed down from his house to find that leasing company officers had broken the lock securing a villager’s motorbike and were attempting to take it away.

“If I was at the scene, I wouldn’t have even let them break the lock,” Sakhorn said. “But I stopped them then.”

Military police, who had been alerted, called him to keep the men there until they arrived, he said.

Phorn Sophal, the aunt of Leang Kim Chheang, who was behind on his payments for the motorbike, told VOD that she was trying to negotiate with the officers when they grabbed the motorbike.

“They were very aggressive. I was shocked, and villagers came to surround them after I shouted,” Sophal said.

Her nephew indeed had overdue payments, but he was trying to collect money and find a compromise, she said.

A lawyer representing Akchalnak Trop LOD’s Kampong Chhnang branch issued a letter saying Kim Chheang had bought the $2,590 Honda motorbike from the leasing company on March 29, 2019, with a $550 initial payment and $96 per month for 36 months.

But Kim Chheang had missed his last three months of payments, the letter said.

The debtor had broken the agreement, and the company’s officers had gone to the village to collect the money on Tuesday afternoon, the letter said. But they were instead accused of intentionally damaging property — an accusation that damages the company’s reputation and that it denies, it said.

Kampong Chhnang provincial prosecutor Ith Sothea said on Thursday that the four men were being questioned at the court following their arrest by military police.

Sak Sarang, the provincial military police commander, said companies must go first to authorities and the courts before taking action against debtors.

It was a crime to damage property unless they had the cooperation of authorities, Sarang said.

“Because they went and damaged others’ property like that, and [because we] had an order from the prosecutor, authorities had to implement it and bring their case to the court,” he said.

Amid nationwide economic difficulties due to the coronavirus pandemic, Prime Minister Hun Sen in July urged microfinance institutions and banks to be understanding of debtor’s struggles. But he also said at the time they should confiscate people’s properties if the debtors had been encouraged to stop paying, an apparent reference to social media posts by the outlawed opposition CNRP.

“I encourage [you] to confiscate [property] if you believe those [borrowers] made claims or movements [to encourage] not repaying the banks,” Hun Sen said.

“I have just appealed to banks to be understanding during this difficult stage, but repayment still has to be done,” he continued. “But there is a movement of not paying back the banks. I will support the bank to file a complaint to the court to confiscate [collateral] if those people support the policy of that person who made the appeal.”