Midnight Deadline for Devotees to Leave From End of the World 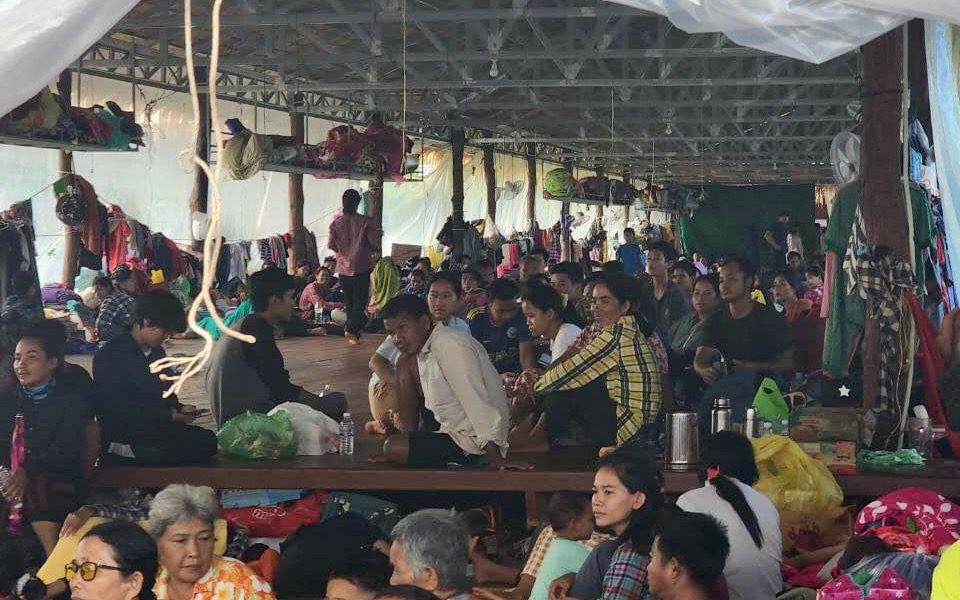 People are camping in makeshift structures in Siem Reap, awaiting an apocalyptic flood that would engulf the Earth except Siem Reap. (Siem Reap Provincial Administration)

Thousands of worshippers of politician Khem Veasna who are gathered at his farmstead for a prophesied apocalypse have until midnight to disperse, authorities said, but the political party argued it had asked for permission to continue for a month.

A week since Veasna began posting online of a coming flood that would wipe out all of Earth except for his farm, Siem Reap provincial authorities are urging devotees to go home.

Provincial police chief Teng Channath said on Tuesday that people had begun to leave, but only slowly.

“They are still there,” Channath said. “As for the next step, we will see. The province will decide.”

The provincial administration said in a statement Monday that the authorities’ deadline was midnight Tuesday.

“This is a gathering without permission from the authorities. And it causes social insecurity and poor sanitation, environmental impact and Covid [fears],” the statement said.

However, a statement issued Tuesday by Veasna’s League for Democracy Party said it had requested permission from the commune to gather until the end of September.

Tbeng commune chief Seab Pha, however, said he did not accept the party’s letter, which he said was a notice from the LDP and not a request for permission. It had been sent after provincial officials visited the site over the weekend, Pha said.

“We saw a lot of people on his farm and extended out to the road as well. We pity the children, older people and pregnant women who have also gone there. We wonder about their health. They must stop the gathering by tonight,” he said.

It is unclear how many people have gathered around Veasna’s property, though a local official previously said around 200 people were spending nights at a nearby pagoda. Upper estimates have ranged beyond 10,000 total people as families arrived from around the country. Some migrant workers are said to have even returned from South Korea for doomsday.

One migrant worker in Korea, Thol Menghouch, said he had two relatives in South Korea who left immediately after hearing Veasna’s prediction.

One cousin sent $2,000 to his family so they could all go to Siem Reap together. The cousin arrived in Cambodia on Thursday, urged the family to sell all their jewelry, and set off for Siem Reap, Menghouch said.

He expected that more could be headed off after Veasna’s daily sermon from 1-7 p.m., he said.