Ministry, Forest Patrollers Accuse Each Other of Breaking the Law 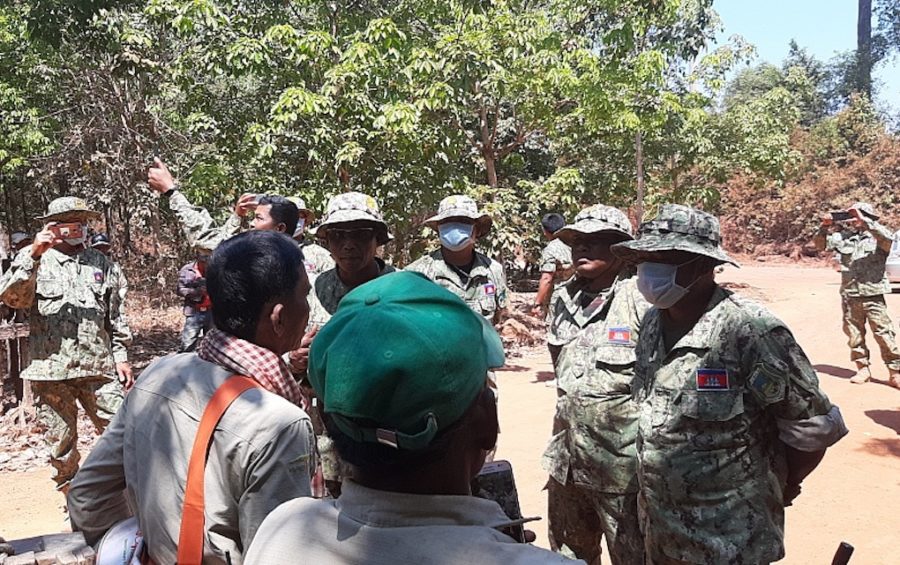 The Environment Ministry has accused a forestry patrol group of illegally monitoring a protected forest, drawing criticism from civil society organizations who say the ministry has violated the group’s rights and restricted its conservation efforts.

The Prey Lang Community Network (PLCN), an organization of locals who patrol and report on forest crimes in the wildlife sanctuary, canceled their annual conservation event last weekend after several groups attempting to enter the sanctuary, which spans four provinces, were stopped by authorities on Friday.

Environment Ministry spokesman Neth Pheaktra told VOD in a message on Monday that the ministry had repeatedly warned PLCN that it needed to be registered with the Interior Ministry in order to enter the forest.

In a statement released Tuesday, more than 100 civil society groups and local communities expressed outrage over PLCN being unable to hold its annual tree-blessing ceremony, and called on the ministry to “stop opposing the activities, rejecting the research and intimidating the members of the PLCN.”

The spokesman claimed PLCN had entered a “core zone” of a protected area in violation of Article 11 of the Protected Areas Law, which he said justified officials’ blocking of the group from entering the sanctuary.

However, the civil society groups on Tuesday said the Prey Lang protected area had never been zoned after it was designated a wildlife sanctuary in 2016. Pheaktra did not respond to questions about zoning in the sanctuary on Tuesday.

The report notes that University of Copenhagen researchers who prepared the document had submitted a draft copy to the Environment Ministry, which responded that it was “not in a position to provide comments to the draft report.”

The Prey Lang Wildlife Sanctuary occupies more than 430,000 hectares in Kratie, Stung Treng, Preah Vihear and Kampong Thom provinces. It lost nearly 42,000 hectares — or about 10 percent — of its forest cover between 2001 and 2018, according to Global Forest Watch satellite data.

PLCN holds a Buddhist blessing ceremony there annually, both to raise awareness of conservation activities in the forest, and to alert citizens to illegal logging within protected areas.

Pheaktra, the ministry spokesman, said PLCN had organized local community members and formed partnerships with NGOs Peace Bridges Organization and Danmission, which provide funding to the network, without approval from the Interior Ministry.

In a post on the Environment Ministry’s Facebook page, Pheaktra accused the two NGOs of conducting illegal activities, and said they must stop working with PLCN and sign an agreement with the ministry in order to conduct conservation work.

Som Chanmony, Peace Bridges Organization’s executive director, said his organization has taught indigenous Kuy communities about conflict resolution and cooperation, as well as forestry protection. The communities had requested training on forest conservation from the NGO, Chanmony said, adding that they had informed local authorities about their activities.

“The community is the one who wants to do something, and we work with communities so when they want to do something in their village, they request help from related organizations [like Peace Bridges]. It is a normal thing,” Chanmony said.

Pheaktra said the ministry worked to protect the sanctuary with communities, and international and local NGOs that follow legal procedures and have agreements to work alongside state-employed forest rangers.

The civil society groups on Tuesday also pointed to a reference in the ministry’s Facebook post to the Law on Associations and NGOs (LANGO), which the groups said validated previously raised concerns about the law being “overly broad and subject to abuse,” leading them to call for its repeal.

“Despite past assurances from the Interior Ministry that LANGO would not be used to hinder activities of grassroots groups, the Ministry of Environment used it as a justification to prohibit the legitimate conservation activities of the PLCN,” the groups said in the statement.

Am Sam Ath, monitoring manager for rights group Licadho, said in the statement that authorities use of LANGO against PLCN is “highly restrictive and legally inappropriate.”

“This grassroots community network must be allowed to conduct its conservation activities free from harassment and intimidation,” Sam Ath said.

Provincial leaders for PLCN said they were frustrated with the ministry’s suppression of their event last week and worried that authorities would try to stop the network from monitoring the forest.

Ly Chheang, PLCN coordinator for Stung Treng province, said the organization had not registered with the Interior Ministry out of concern that the government would restrict the group’s activities.

“I don’t want to register because whenever we register, they will restrict us more. The ministry will set up boundaries for us. We will not be able to walk everywhere in the forest,” she said.

Coordinators for Kampong Thom and Kratie provinces, Minh Ny and Ek Sovanna, concurred, and both noted that the ministry had not previously accused PLCN of illegal activity.

Preah Vihear province’s coordinator, Srey Thai, refuted the ministry’s claims and instead accused the government of violating the Constitution by infringing on citizens’ rights to protect natural resources.

Pheaktra, the ministry spokesman, said he considered PLCN’s refusal to register with the Interior Ministry an open defiance of the law.

But Thai said Prey Lang’s forests would disappear without community patrols, adding that the Environment Ministry would bear sole responsibility.

“Why does [the ministry] prevent people from protecting natural resources?” Thai said. “They should be encouraging people and giving the community a chance to participate.”