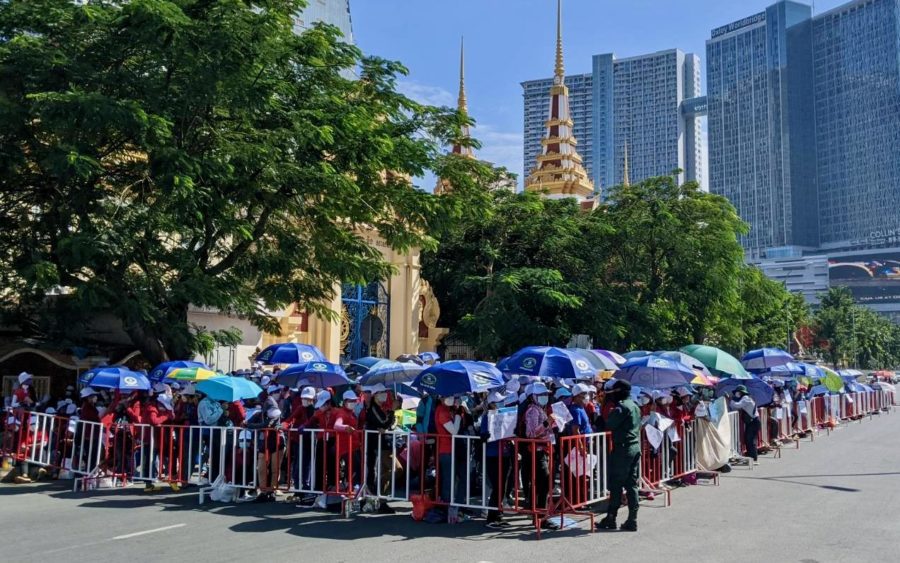 Casino workers shield themselves from the sun as the NagaWorld strike entered its third day on December 20, 2021. (Keat Soriththeavy/VOD)

Casino workers ended the third day of their strike Monday afternoon, with no apparent resolution to the labor dispute involving casino firm NagaCorp.

Workers are alleging labor rights violations by NagaWorld casinos as part of mass layoffs announced this year. More than 1,300 workers were terminated by Hong Kong-listed NagaCorp, with more than 300 workers refusing to accept compensation packages from the casino firm.

The mood of workers remained upbeat and celebratory on Monday, with strike participants cheering on employed NagaWorld workers who walked past the strike at the end of their shift. The workers continued to chant slogans and sing songs, watched by dozens of police and security personnel.

The strike did start on a tense note Monday morning, when police and district security guards cordoned off Labor Rights Supported Union members on the street in front of the National Assembly, with their numbers swelling to around 600 strikers by the end of the day. Guards pushed the barricades in closer during the first hours of Monday’s strike, at one point shoving the metal movable fences and threatening to hit workers.

NagaCorp released a statement to shareholders on Sunday announcing it would continue operations during the strike. It said “the Board believes that the illegal strike has had no material negative impact on the overall business and operations of the Group,” even though Phnom Penh city had ordered an end to the strike on Saturday citing its impacts to NagaWorld’s business.

Almost 60 civil society organizations signed onto a letter in support of LRSU’s strike, slamming the municipal court and city hall for ruling the strike illegal.

The letter, released Monday afternoon, first criticized the Phnom Penh Municipal Court for releasing a provisional disposition on Thursday without alerting LRSU to the decision until after the strike began on Saturday. It noted that LRSU should have been called in for questioning or oral arguments before the court decision was released.

The letter said that NagaWorld management failed to engage with workers and instead leapt to shutting down the strike with a court order.

“The Phnom Penh Court of First Instance should not have accepted Naga​​World’s request for provisional disposition and its decision to issue such an order severely undermines the fundamental rights and freedoms guaranteed to NagaWorld employees by the Cambodian Constitution,” it said.

As for the Phnom Penh City Hall’s order to cease the strike, the letter notes that the Law on Peaceful Demonstrations — which the city accused strikers of violating — would not apply to this strike because it took place outside or adjacent to the company, rather than on its grounds.

“We hope that LRSU members and NagaWorld employees will not be cowed into silence through these forms of legal action and intimidation,” it said.

Ros Sovorn, a casino floor dealer who has been working at Naga since 2014, said she was growing tired after standing in the sun for three days, but she wouldn’t stop, even if it meant she would lose her job.

“I’m tired and so hot but I want the union back and our solution from Naga,” she said. “I’ll keep doing as much as I can do.”

Oum Chanthan, 21, told VOD she was in the second year of a three-year contract, but was terminated in August. She was also frustrated with the terms of her contract, which banned her from getting pregnant during her employment.

“I want Naga to get us back and take out the pregnancy restriction. During my three-year contract, I should be able to get pregnant,” she said. “I’m not tired because I need the solution.”

When authorities ordered strike participants to depart at 4 p.m. union members sang the Cambodian national anthem, packed their possessions and exited the area after district guards opened the barricades.

As he headed back to his motorbike, Heng Taro, a 30-year-old cleaner for NagaWorld, said he and the other workers would come back on Tuesday, but wasn’t sure what time.

“This is not easy. No one wants to strike, but the important thing is we want our solution,” he said.