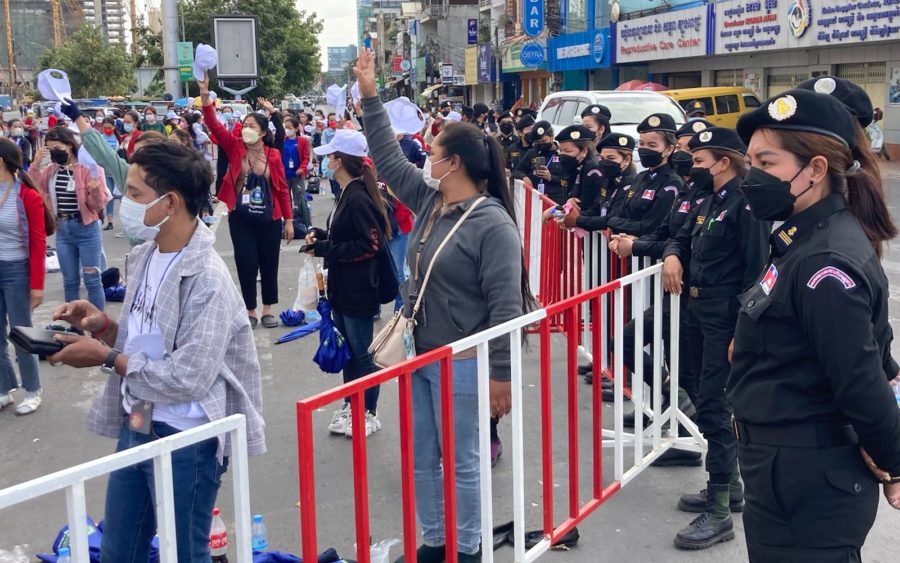 Nagaworld’s union called for an investigation into a Facebook account that accused the casino workers’ union of being backed by foreigners and said these claims were fake.

A Facebook page, whose name roughly translates to “Brave Women Volunteers” that has just over 100 followers and only one post before the Saturday, has been sharing photos that it claimed were foreigners assisting the union. Most of the photos are of union leader Chhim Sithar, who is president of the Labor Rights Supported Union, and show her attending other union events and protests, sometimes with foreigners in the photographs.

Several media, including government-aligned Fresh News and an Interior Ministry official, reposted the photos and comments from the page. Labor Ministry spokesperson Heng Sour posted on his Facebook that the union was using pregnant workers in the expectation that they will get injured — a move he called a color revolution tactic.

The government has routinely used a so-called color revolution narrative to crack down on the political opposition, civil society, and protests and demonstrations. In the run-up to a political crackdown in 2017, similar anonymous Facebook accounts posted photos and text about CNRP officials and civil society members, labeling their activities a part of a color revolution.

The LRSU statement, released Sunday afternoon, said the union’s strike had been carried out in line with the Labor Law.

In the statement, the union flagged one woman who was photographed during the strike Saturday, which the page named as a Japanese national who led and organized the strike. The union said she was a Cambodian national and a union activist.

“LRSU [The Nagaworld union] appeals to the Ministry of Information to immediately take action against the above Facebook page and any media institutions or individuals publishing these false accusations to stop the spread of fake news in Cambodia,” it said.

The woman accused of being a Japanese national told VOD that she was a Cambodian national and local unionist, and rejected the accusation made in the Facebook posts. Touch Sereymeas, 29, said she is an active employee of NagaWorld for the last five years and did not organize the strike.

“I am not managing the protest — this is their willingness that comes to strike,” she said, referring to workers in the strike.

“I would tell unprofessional journalists or media that without clear sources continue to label me because I am a Khmer citizen and I am not a Japanese citizen,” she said.