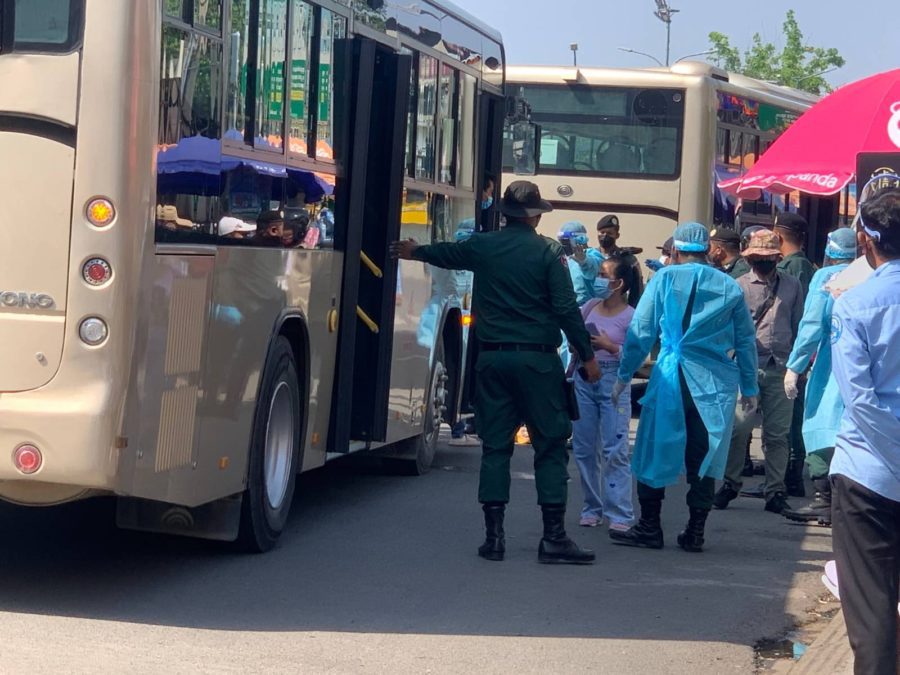 Security and health officials on Tuesday again detained NagaWorld strikers as they attempted to return to their protest. (Kuoy Langy/VOD)

A meeting of several governmental departments led by Interior Minister Sar Kheng to defuse the NagaWorld labor conflict was “preliminary,” City Hall said, as officials stayed tight-lipped on Thursday about the talks.

The Wednesday meeting was to include the heads of the National Police, Phnom Penh Municipal Court and military police, and officials from the ministries of interior, labor and justice, according to a letter seen by reporters.

However, multiple government figures contacted by VOD on Thursday said that they could not comment on the meeting or that they weren’t in attendance, directing a reporter to other officials who said the same.

Phnom Penh deputy governor Keut Chhe told a reporter the meeting was only preliminary with no clear outcomes, but that they should call the ministries of interior and labor for details.

Heng Sour, a Labor Ministry spokesman, told VOD he did not join the meeting but also said the Interior Ministry could comment, given that Sar Kheng had presided over the gathering.

However, Interior Ministry spokesman Khieu Sopheak said he didn’t know about the meeting and that VOD should contact the Phnom Phnom governor’s office for information.

Khun Tharo, program manager at labor rights group Central, said he also wasn’t sure how the meeting went but that the Labor Ministry is ultimately the one tasked with ending the dispute by finding a solution.

Mass layoffs of more than 1,300 casino workers last year sparked a strike and demonstrations in December, as protesters said union leaders and members were targeted for termination.

Amid mounting pressure from authorities, 11 workers are now in jail over the protests.