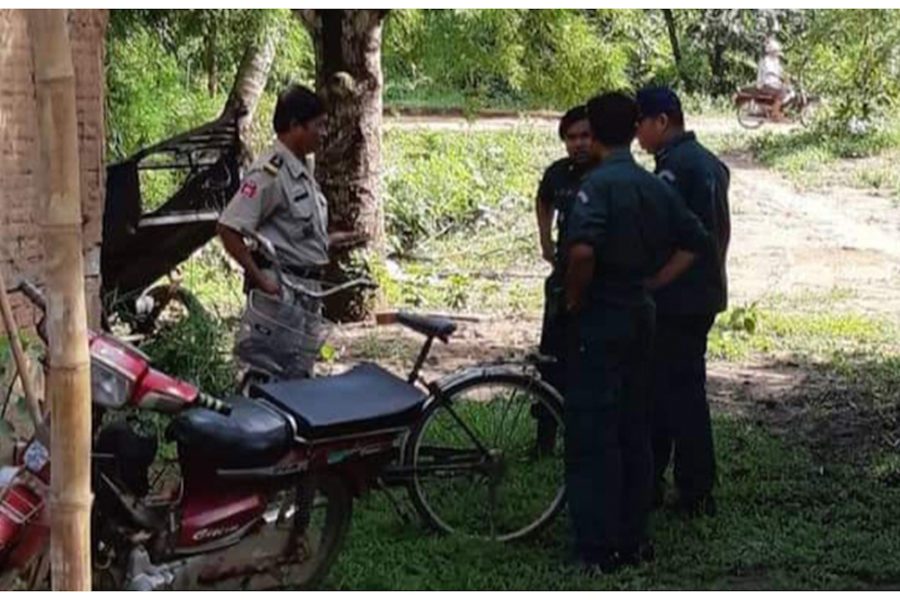 A commune police chief in Kompong Cham province was today transferred from his position after he blundered by trying to prevent a num banh chok gathering on Thursday morning, provincial administrators said.

The Khmer cold noodle dish has rapidly risen in political prominence over the past month, but ongoing twists in its partisan signification have muddled officers’ judgment over whether it connotes rebellion or hegemony.

Heng Bunthorn, until recently the police chief of Koh Sotin district’s Peam Brathnoh commune, crashed a num banh chok gathering of about 40 people and 30 kg of noodles, according to those who attended.

In a video of the incident circulated online, the police chief can be seen phoning for advice while the noodle eaters defy his orders to stop.

The attendees were largely members of the banned political opposition, the Cambodia National Rescue Party (CNRP). A month ago, such gatherings were liable to land the former politicians in court, with dozens in Battambang province summoned for interrogation for lunching together at ex-CNRP commune chief Sin Chanpeou Rozeth’s num banh chok shop.

They were accused of violating the much-criticized Supreme Court order that dissolved the party in November 2017 nine months before a national election.

The court summons in Battambang, however, also triggered the rise of num banh chok as an increasingly popular symbol of resistance.

On Monday, Prime Minister Hun Sen acted to break the growing “thorn” by appropriating num banh chok for his own Cambodian People’s Party (CPP) — ordering his party machine to mobilize across the country and throw mass noodle parties on Sunday.

Institutions such as the Royal University of Phnom Penh have fallen in line, announcing a num banh chok gathering for June 9.

“Samdech already announced to the people to have num banh chok, ‘Let’s eat!’ But the authorities still moved to break it up.”

Later on Thursday, the police chief, Bunthorn, denied that he had acted against num banh chok.

“I did not ban it. They even invited me and our officers to eat together,” he protested.

“I did not ban them,” Bunthorn insisted. “[My] boss ordered me to go and just have a look, seeing that there was a gathering.”

His denials were not enough, however, as Kompong Cham provincial governor Kouch Chamroeun on Friday proclaimed his regret that officers had tried to stop people from having a num banh chok gathering.

“I am Kouch Chamroeun, Kompong Cham provincial governor,” he wrote in a statement. “After seeing the video clip, I am really sorry and apologize for the actions of Peam Brathnoh police chief Heng Bunthorn, who went to prevent the freedom of people having num banh chok.”

The province’s top administrators had decided to transfer Bunthorn from his communal police chief role to a position at the provincial police headquarters, Chamroeun said.

However, even as Bunthorn was blamed and punished, it appeared the true responsibility for the errant noodle crackdown may rest higher up the chain of authority. The commune police chief, some suggested, was merely a scapegoat.

Koh Sotin district’s deputy police chief, Lor Seanghourt, revealed to VOD that before Bunthorn went out to try to disperse the ex-CNRP officials’ noodle gathering, he had made a phone call to the district police chief requesting permission — and had been granted.

“He asked for approval. How could he have dared to act alone?” Seanghourt said.

He further added that the district-level police force had only approved the action because there was an order handed down from higher up.

“There was advice given to commune and district police to break it up and not allow them to gather in large numbers,” Seanghourt said, though he would not disclose who gave the command.

“Those who made the order and those who implemented it are all in the wrong,” Narin argued.

“They seem not to have clearly listened to Samdech Prime Minister’s comments.”