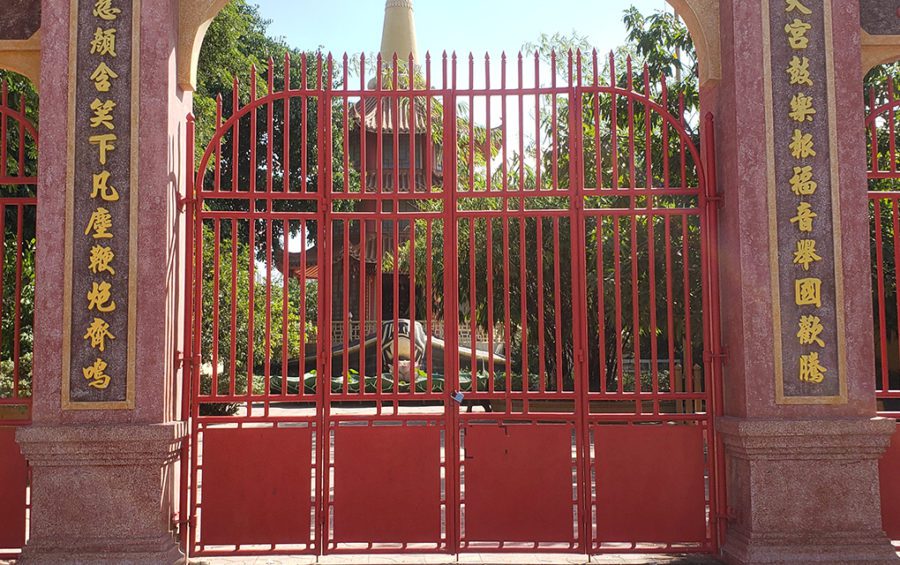 Tan Kimlin, 72, has looked after a Kandal province graveyard for the Chinese-Cambodian community since 1993. This year, just one in 10 graves has received visitors during the ongoing Qingming Festival, she says.

“Before, they flooded to the graves during these days,” Kimlin says. “There was no space to park. But now, in one day there’s only four or five cars.”

The festival, also known as “tomb-sweeping” day, is an annual holiday that, in a normal year, would see families cleaning and decorating the graves of their ancestors.

But amid Cambodia’s current Covid-19 outbreak, authorities are advising against travel and outlining quarantine measures, and those in the Chinese-Cambodian community are finding ways to celebrate at home.

Kimlin says families usually arrive in late March and stay through the official date of the festival in early April. But this year, even those who have come have stayed only for a brief visit, and families have taken turns in the graveyard, she says.

“They are very quiet and not cheerful like before,” she says. “They just come to fulfil their obligation and burn incense and pray and leave quickly without taking rest or eating.”

Normally, visiting families would stay to eat and chat among one another, she says. They would adorn the graves with wet, colored paper to help cool their ancestors down, or burn fake money for their benefit.

“This ceremony is our tradition. During this season the ghosts are released, like at Pchum Ben, to meet their children,” Kimlin says.

“Before, every grave had three roast pigs as offerings,” Kimlin adds. But this year there are hardly any, she says.

The change might not just be due to caution around health, she says. Many families are facing financial hardships amid the pandemic’s economic impacts.

Cambodia Chinese Tour Guide Association president Tea Kileng says that pre-Covid he would travel with his family and relatives from Siem Reap to Kratie province every year to celebrate the festival.

But for two years his family has stayed at home and made offerings of fruit and food in the house instead.

“If we go to Kratie, people will be afraid of us while we would be afraid of them,” he says. “For my family, this year, and since Covid, our family has decided not to go.”

But Kileng still notes the importance of the festival to him and his family.

“This tradition has been passed down from one to another,” he says. “I follow my aging parents.”

For provincial authorities, the festival is in part a preparation for Khmer New Year in two weeks’ time.

Stung Treng spokesperson Meng Kong says the province is asking its residents not to leave to attend a ceremony elsewhere, whether for Qingming or Khmer New Year.

“If it is necessary, they need to implement the Health Ministry’s instructions strictly … and when they return, they have to be self quarantined for 14 days,” Kong says.

Typically, however, more people arrive in the province during the festival than leave it, he says.

The provincial administration has a team of doctors ready to mobilize in case of any issues, and the military police will help patrol the streets to check on people’s health, he says.

“To check on people’s health daily and ask them to fill out some questions if we find that the brother or sister has come from a Covid pandemic location,” he says. Authorities would also ask people to quarantine if they are deemed to be causing risk, he adds.

Stung Treng has yet to officially record a Covid-19 case — alongside Mondulkiri, Pursat and Ratanakiri.

A statement issued by the Ratanakiri provincial administration on Monday also calls for residents, especially those with Chinese heritage, to avoid unnecessary travel at this time.

For those that do, authorities are asking that people provide details about their trip and conduct self-quarantine for 14 days while being monitored by health officers.

On Wednesday, the government issued a statement extending the precautions to Khmer New Year, and asked members of the public to act responsibly.

People should only meet family members at their homes and avoid unnecessary travel, and avoid organizing ceremonies that will put people in crowds, the statement says.