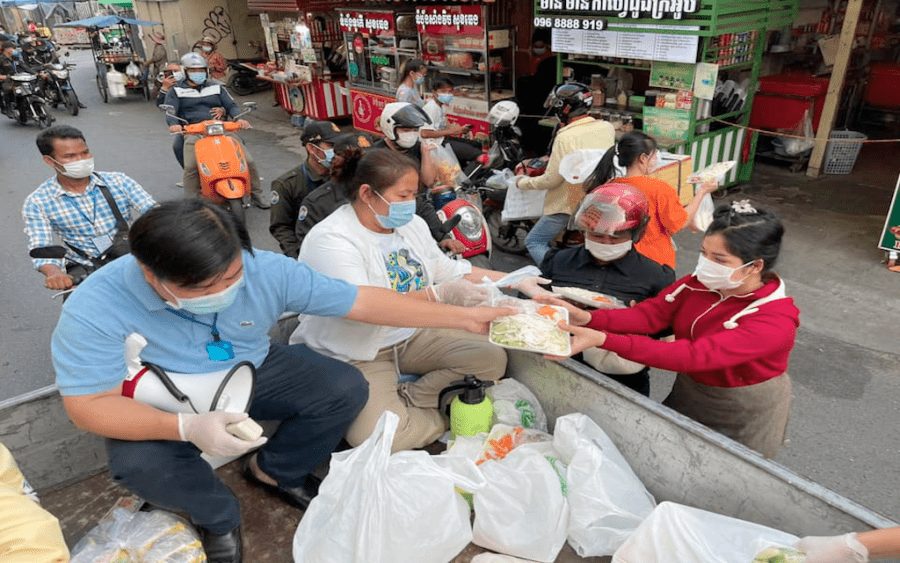 Local authorities have been providing food donations to residents during the current lockdown, as seen above in Boeng Keng Kang district, with Stung Meanchey II residents alleging they had yet to receive any aid. (Boeng Keng Kang District)

About 100 residents in a Phnom Penh lockdown zone protested for food on Thursday night, according to a witness, as the local commune chief labeled the protesters an “opposition group” who are “not poor” and “give the authorities headaches.”

Stung Meanchey II commune chief Touch Sam Ol, in Meanchey district, said the protest was in Phneat village, and authorities would be distributing food to the residents on Friday morning.

“We hadn’t been able to [distribute food] in time for them because there have been too many and the supplies have not arrived on time, and there has been only rice so we couldn’t distribute just rice,” Sam Ol said late Thursday.

However, he said there was a “mastermind” behind the protest.

“In short, they are an opposition group and they are not poor,” he said. “The majority are rich, and firstly they were angry with us because we blocked the road … and they could not earn money to support their living.”

A few of the protesters had even received gifts of food from the state already, he added. “It gives the authorities headaches,” he said.

He also denied that the residents were hungry.

Stung Meanchey II is part of Phnom Penh’s red-zone restrictions due to high numbers of Covid-19 cases linked to garment factory workers living there. The government shut down markets and initially said the Commerce Ministry would take over all food sales in red zones, though local authorities have since allowed some vendors to sell in open, outdoor areas. The government has also set up a Telegram group so people in need can ask for donations for food, and it has been flooded with thousands of messages.

Mao Thora, a restaurant worker near Thursday’s protest, said about 100 people had gathered on the street, some carrying banners saying “My village is starving.”

The protesters had said the village had yet to receive food donations from the state, and without the ability to run their businesses they couldn’t pay rent, according to Thora. Some were workers who could not get to their workplaces, while others were small business owners who had been forced to suspend their operations, she said.

“It was crowded so I did not go very close to them since I am afraid of infection since I am in the red zone. They gathered and protested to demand that the authorities quickly provide food donations for them,” she said.