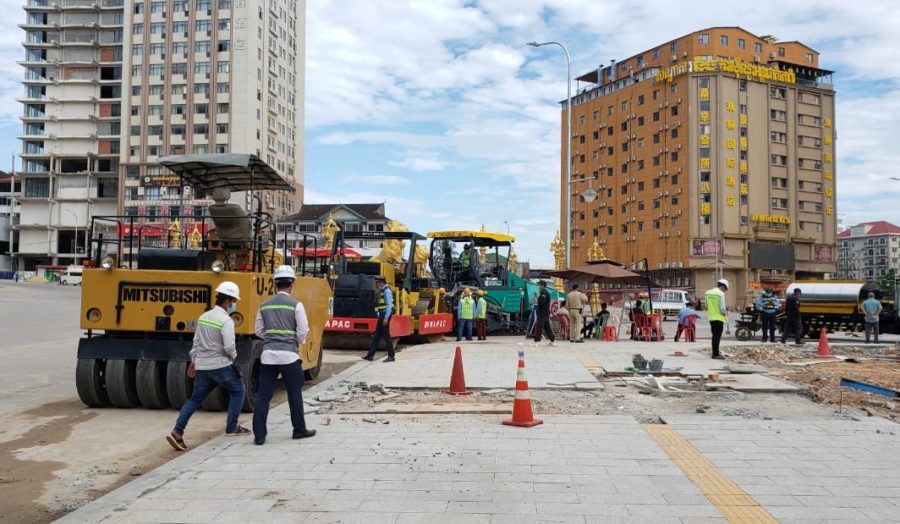 Workers repair part of a sidewalk in central Sihanoukville on December 2, 2020. (Danielle Keeton-Olsen/VOD)

About 150 families encroaching on Sihanoukville’s 7 Makara St. and refusing to make way for roadworks could face jail time and hefty fines, according to local authorities.

In an announcement dated Friday, the Preah Sihanouk provincial administration warned people living and doing business on the road that they had been told since 2019 and repeatedly in 2020 that they were encroaching on the road.

They must remove all structures on the sidewalk by February 28 or face consequences, the announcement said.

“Till now, the Preah Sihanouk provincial administration has checked that some owners have already made voluntary removals, but there are some owners of constructions who have not yet implemented the notification,” it said.

A provincial spokesperson said 153 families with 128 houses would be affected, but they did not specify whether any compensation would be given.

“They have been living there since long ago, since 1992 or 1993,” while others ran businesses along the street, Nim said.

“The majority of them have structures of their houses on the road’s sidewalks, from before the road had many people, when there was no one managing it,” he said.

No families had left the street so far due to the demands of the roadworks, he said.

But it was a similar situation to about 180 families who had been removed from living along a canal in his commune over the past two years to make way for infrastructure work, he said.

“They agreed to move out after provincial compensation,” and were now living in neighboring Prey Nob district’s Bit Traing commune, he said.