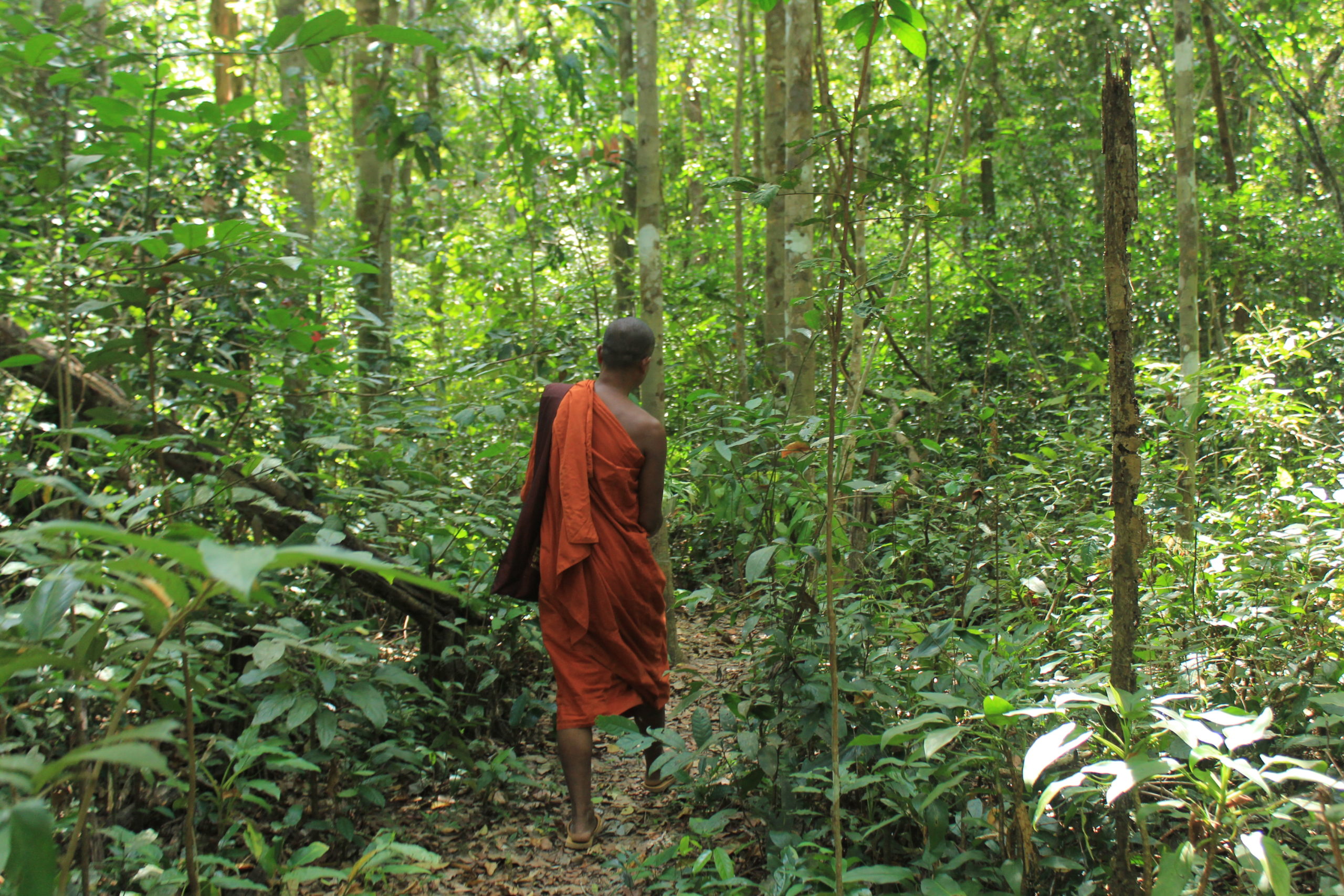 The Venerable Prom Thomacheat carrying food for a resident gibbon in the Metta Forest around his pagoda in Trapeang Chour commune, near the Oral Wildlife Sanctuary in Kampong Speu. (Andrew Haffner/VOD)

Kampong Speu’s Metta community forest, home to a monk who has been helping locals protect the woods, is seeing rising violence and clearing by soldiers, including warning shots fired at the monk, residents have alleged.

Residents had been camping out in the woods to protect the forest, which was last year granted to the military’s armored vehicle military unit for clearance and settlement by military families. Local residents argue that last year’s decree, dated August 20, took away and privatized a vital community asset without any notice.

But they no longer dared to patrol the forest following recent violence, said resident Lok Sokly. Soldiers were clearing the area daily with two bulldozers, two tractors and an excavator, he said.

He said that in late March, soldiers fired eight warning shots at Prom Thomacheat, who has been living in the forest for about 20 years.

“The shooter was a cold-blooded man but they gave him a gun. He took our phones and prevented us from taking videos,” Sokly said.

Thomacheat said he could hear the destruction of the forests every day, but he no longer visited the areas being cleared because he could not stop it.

He added that he had not filed a complaint as it was not a new problem. “I did not have any hope. I do not want to have karma with that person,” he said. Shots were also allegedly fired at the monk in 2013, possibly due to unhappiness over his conservation efforts.

Khorn Khon, 65, said she had also been beaten by soldiers in early March, and now half of the community forest, also known as Udom Sre Kphos, was cut down.

“We cannot go in, as when we go in, we will face violence like in my case,” she said, adding that she and three other victims had filed a complaint but no action was taken.

He added that the land had now been given by the state to the soldiers, and it was rightly theirs to clear — not the community’s to protect.

“They are clearing their land — the state gave it to them. They are abiding by the law, and they are not affecting the community’s land,” he said.

This week, resident Khoeun Kea added that soldiers had again on Monday fired toward and used violence against community members.

Army spokesman Mao Phalla said on Wednesday he was unaware of the incidents and that troops in the area were not under his control. He referred questions to the tank unit but said he did not know who its spokesperson was. Defense Ministry spokesperson Chhum Sucheat said he could not respond to questions during the New Year period.