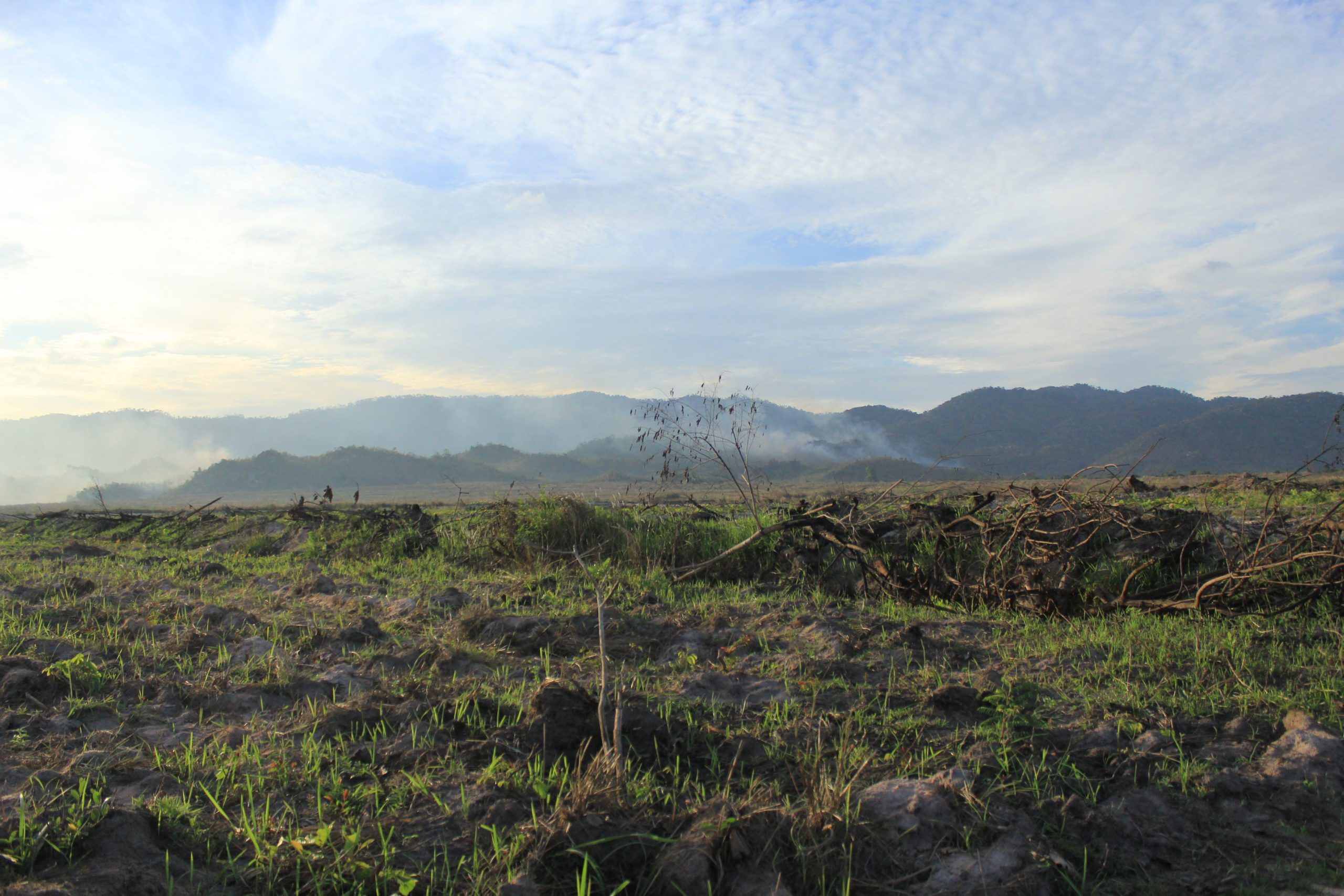 A deforested section of land up the road from woodlands where a group of soldiers allegedly assaulted locals on Tuesday outside Po Meas village in Kampong Speu. The disputed forest area is in the mountainous Oral district. (Andrew Haffner/VOD)

On Tuesday, members of the elite Brigade 70 military unit fired warning shots and physically assaulted villagers as the soldiers attempted to clear a section of disputed forest in the Oral district of Kampong Speu, according to local witnesses and a rights organization.

Phon Thoch, 60, was among a group of locals who gathered on Tuesday to confront the soldiers outside the rural Po Meas village. Thoch estimated that 20 villagers had approached the troops, who came as part of a mixed group with environmental officials and a crew of four hired workers. The workers were using chainsaws to cut and clear trees under the soldiers’ protection, she said.

“We tried to stop them from cutting down trees,” Thoch recounted, describing the verbal altercation that followed. “They did not listen to us and said the forest belongs to them, [and asked] why we came to cause trouble.”

From there, Thoch said the conflict escalated to the point where soldiers assaulted three of the villagers including herself and two men. Some of the troops wore their uniforms, she said, while others were in civilian clothes. At some point, troops attempted to drive away the villagers by firing their guns into the air, as well as shooting into the ground.

“They [said they] have the law and rights and they will shoot us one by one: ‘One come, one gets shot, two come, two get shot,’” Thoch told VOD by phone Wednesday evening.

The Tuesday clash was investigated by provincial members of the rights group Licadho, which posted on Wednesday a brief compiled from the villagers’ accounts.

Though deforestation by major agribusinesses has been long standing in the surrounding Trapeang Chour commune, tensions in the community around the forest have risen since a royal decree dated August 20, 2021, granted 262 hectares of forest land to the military’s armored vehicle military unit.

The land itself is part of the Oral Wildlife Sanctuary, according to Licadho, and villagers are also mobilizing to protect a section of attached forest that had in 2003 been formally recognized by the Environment Ministry as a community protected area. The resulting conflict caused by the competing claims now affects about 253 families, Licadho stated.

Villagers told VOD reporters that Brigade 70 has been involved in the area since at least 2017. Rights groups have implicated the brigade in human rights abuses, and the military unit is otherwise known for having handled the personal protection of Prime Minister Hun Sen until the establishment of his bodyguard corps.

On Wednesday, Trapeang Chhour commune chief Tep Nem offered a more mild narrative than the villagers of the confrontation the day before.

“I did not know about it, but the village chief told me that [the villagers] came to confiscate [the soldiers’ and workers’] knives and axes, but they did not agree,” Nem said. “There was no fighting, [the soldiers] just did not allow them to go inside their area.

Nem disregarded the claim that soldiers fired shots during the conflict, saying he hadn’t heard anything about the guns.

“I did not know about that. Who would dare to shoot?” he asked. “There was no shooting, if there was any shooting, [the village chief] would have informed me.”

Mao Phalla, an infantry spokesperson for the Royal Cambodian Armed Forces, said he didn’t know about the Tuesday confrontation and had not received any information about it.

Months before the alleged clash, the forest dispute with the military had flared in similar conflicts in late October, when military members and a group of hired hands arrived to clear a section of the disputed forest. Much as on Tuesday, the villagers had confronted them as a group.

Sok Ly, a resident of Po Meas and one of six people who police summoned for questioning after the October conflicts, spoke with VOD reporters who visited the village on February 5. Ly said the legal troubles of the group were ongoing as they tried to resist the military claim to the forest.

“We are just protecting the forest and this is wrong, it’s very unjust for us,” he said of the push to clear the land. “We are under threat from powerful people. We do not know much about the law, so we need a lawyer to help us.”

By then, the conflict had reached an uneasy quiet. Villagers in a simple forest camp within about 100 meters of an Environment Ministry station told VOD they had been sleeping in the woods every night to keep watch over the land.

From the varied accounts of the Tuesday clash, it’s unclear how much the villagers could actually do to repel workers accompanied by the military.

The day after, Kak Soeun, 41, says he was one of the two men beaten by soldiers in the forest. He said at one point there were as many as six people punching and kicking him, with some trying to pull his neck to the ground to kneel on it.

“They threatened me that if they see my face again to prevent them from clearing , they will shoot me in the head,” Soeun said. “They held my neck like a fish.”

He told VOD the community has been protecting the local forest for about 20 years, and that it was a misery to see it now being cleared.

“I told them that, I asked how would you feel if I went to clear your plantation, how angry would you be?” Soeun said.