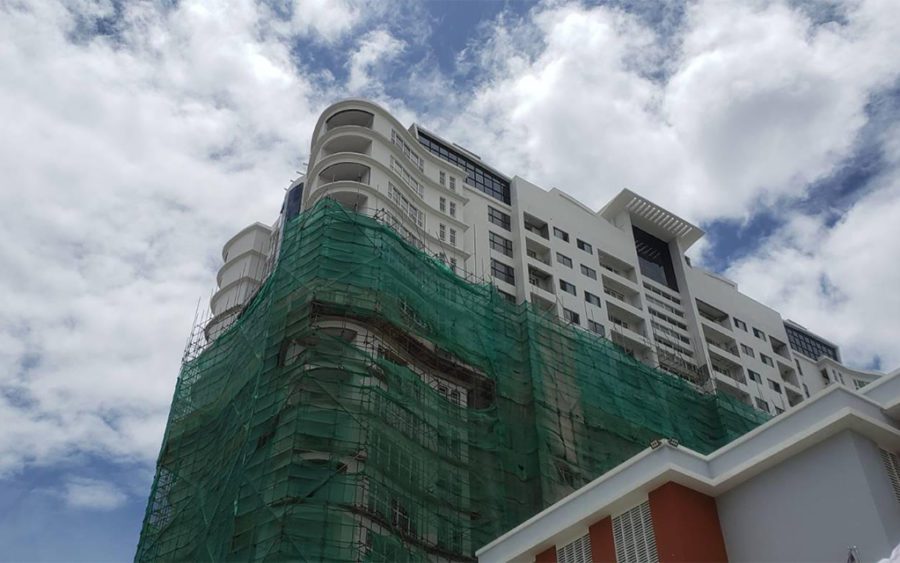 Chuon Vanny’s team of five workers, who lay bricks for the Royal Condominium construction in Choam Chao I commune, have all left him.

Vanny, 50, said he had been calling his boss three times a day, but as chief of a subcontracted team, his money is not paid directly by Royal Group, the project developer, but instead must pass through the hands of two contractors above him. After waiting for a salary since March, the workers returned to their home provinces, but Vanny is still working and sleeping on the construction site with his wife and two daughters.

“The rest [of my team] can’t get money through the company, so they left for home,” he said. “I can’t go because my kids are young. … I asked to continue working there.”

Subcontracted workers say they frequently lose money somewhere along the web of bosses above them who manage constructions, with labor advocates saying pay disputes appear to be increasing during the Covid-19 economic downturn.

And in Vanny’s case, living on the construction site to save some money has put one of his daughters in immediate danger of harassment from an older man.

Yann Ti, secretary of the Building and Woodworkers Trade Union Federation of Cambodia, said the union received almost daily reports of pay disputes that stem back to the twisted web of subcontracting on construction projects.

Most of these disputes involve between 10 and 30 workers who are shorted on pay, he said. Though the organization hasn’t kept a tally of disputes, anecdotally there seemed to be increased cases in April, May and August, making Ti believe that the contractors were taking advantage of Covid-19 outbreaks, which flared into nationwide lockdowns and restrictions.

“Some top contractors think that they can avoid responsibility, and they just take some percentage of the [project fees],” he said.

Khun Tharo, program manager for labor rights group Central, said the government should implement a limit on the number of levels of subcontractors that a project developer can hire, suggesting a cap at three or four levels of subcontractors, so that there is more transparency in hiring and compensation, and someone is held responsible when payments to workers shrink or disappear.

“It’s not up to the private sector [to enforce], it’s up to the government to strengthen this network to make sure those businesses and corporations have to comply with [corporate social responsibility] and contracts in the industry,” he said. “It needs to be specific to the industry, and implemented and established.”

As a subcontractor employing 20 workers at different small construction sites, Suoth Vuthy said he has to manage the payments from his employers, while paying workers — who have not always delivered quality work, especially during the pandemic.

However, he notes that contractors have been known to miss payments because they work as middlemen, and there are many scenarios where money can be delayed or misplaced.

“For me, I do not manipulate their labor so I have to pay them and sometimes it has been late so that I ask them to delay payments … [but] there have been many cases like this,” he said. “Some contractors, they are facing a financial crisis so they run away from workers and owners of their building.”

Many workers and contractors had given up working in the industry, becoming farmers or vendors instead, because they had been cheated by contractors above them or property owners who commission the layers of subcontractors. He too has felt the impact, especially during the pandemic.

“During Covid-19, I do not earn any money while others can earn money because they have connections,” he said.

Seng Lot, spokesperson for the Ministry of Land Management, Urban Planning and Construction, has not responded to questions. A person who answered a registered phone number for the Royal Group provided a contact for a representative who could not be reached.

Up until about four weeks ago, Vanny said he had been working hard even without pay, hoping that his two bosses, both foreign nationals, would soon provide the $260 he was owed and another $500 to pay his team. He and his wife continued working, sleeping inside the building, but now they are working directly for Royal Group, rather than hired by subcontractors, to try to avoid further pay disputes. Land Minister Chea Sophara announced a ban on workers living on construction sites two years ago after a high-rise construction collapse killed 28 in Sihanoukville, but for Vanny, sleeping in the incomplete condo is more appealing than the leaking and odorous tents at the worker campsite.

For support during the lockdown in April, one of his supervisors, a Chinese national, provided him $500, but it was a loan that he would have to pay back upon receiving money for his bricklaying work.

Living on the construction site took a turn for the worse when his 10-year-old daughter started getting attention from another worker on the site. Vanny’s family sleeps on the third floor of the condo, and his daughter and wife stay there while he works. One day when his wife went to the 12th floor where he was working to bring supplies, a man forced his daughter to hold his hand.

The stranger then started taking Vanny’s daughter to different floors of the condo, looking for places where there was no one else around, the 10-year-old recounted to her father. Because all the floors were occupied, the man ran away, but Vanny filed a complaint with police.

“The man quit after I filed a complaint to the police,” he said. “It’s been two weeks since I filed, but no one took action.”

Returning to his home in Preah Sihanouk province’s Prey Nob district isn’t an option because they don’t have work there, and haven’t received money here. When he spoke to reporters in early August, he brought his daughter with him; Vanny said he doesn’t want to leave her alone, but he also can’t stop working at Royal Condominium until he gets the money.

“If I let her stay with my mother-in-law [in Preah Sihanouk], she would beat her up. I don’t want to leave her there,” he said.

Workers may save money from living on construction sites, but the environment not only creates physical risk from the construction but also holds increased risk of harassment and assault, especially for female workers and children, said Tharo, from Central.

He said that workers’ campsites don’t often separate toilets for men and women, and it’s harder to maintain proper sanitation and access to water for workers who live within the bones of buildings under-construction.

“Lots of construction workers are heavy drinkers at the same time, they drink after work and live at same site,” he said. “Because of that environment at the workplace, that atmosphere, women are very harassed by men.”