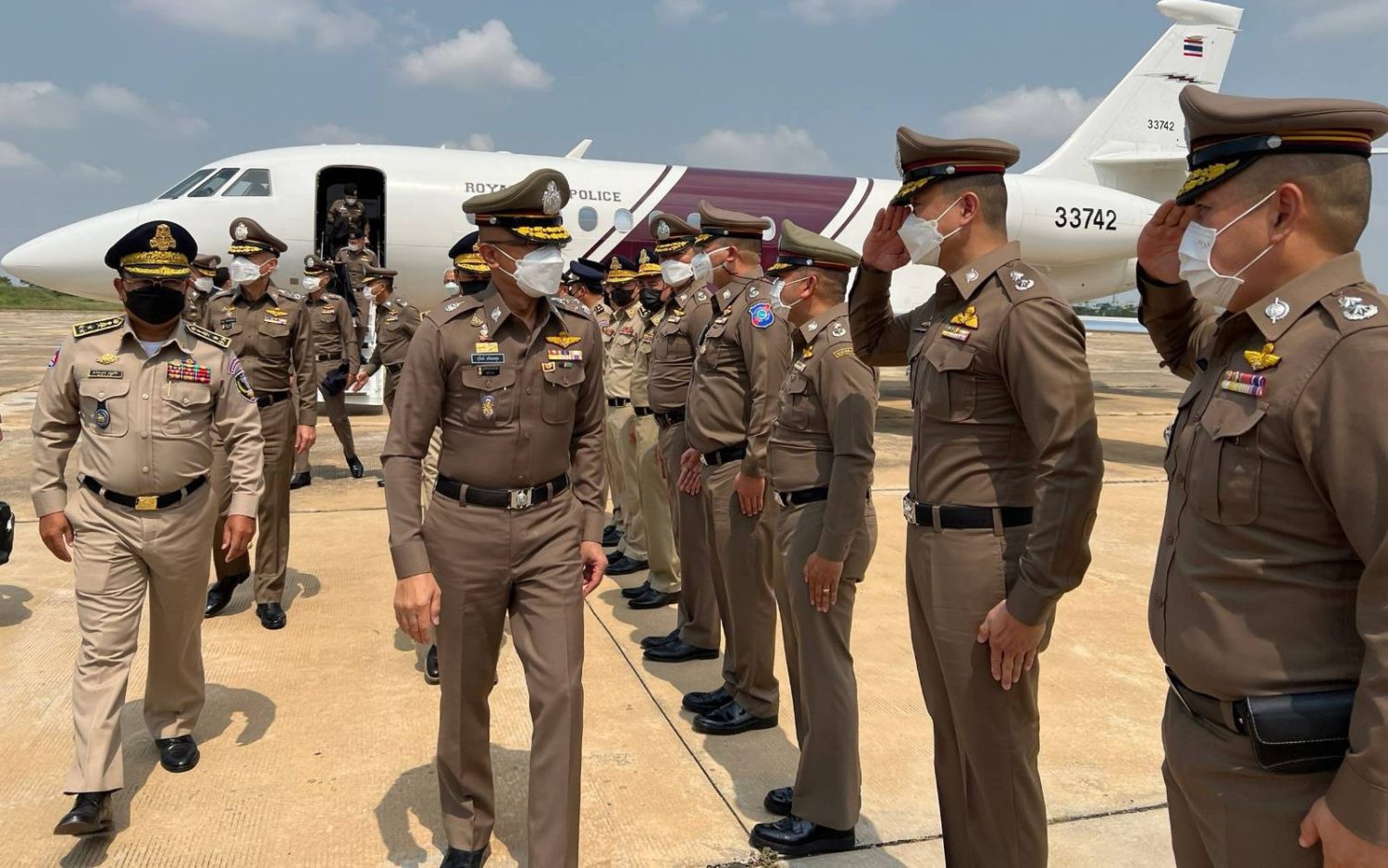 Thai police officials during a visit to Cambodia in April 2022. (Thai police)

Thai police rescued more than 60 people from scam operations in Cambodia during a series of raids this week, though some rescues flopped after alleged bosses found out about the plans, officials announced Tuesday.

A post from Thai police media on Tuesday detailed raids over two days in Sihanoukville and Phnom Penh, noting that some of the operations were botched after scam bosses seemed to find out about the raids.

Police extracted a total 66 Thai nationals during the operations, according to the post.

Thai police announced their plans to rescue victims to Thai media late last month, claiming they would rescue up to 3,000 Thai nationals. However, the police news suggested that interviewed victims felt there was some level of complicity among Cambodian officials. “Government officials are believed to be sympathizing with the call center gang,” it said, citing the alleged victims.

In one rescue on Sunday, Thai police approached a 10-story “luxury townhouse” in Sihanoukville’s Buon commune. According to the police, a Cambodian woman at the wrought-iron gate of the building would not let Thai officials in, and police had to negotiate for eight hours, arguing with Chinese nationals who allegedly operated the compound. The Thai police report said officials paid the compound operators $1,500 and rescued 24 Thai nationals from the compound.

Another raid targeted two buildings in central Phnom Penh, but police claimed the call center operation had already fled before officials arrived, leaving only a table, chairs and some documents in the building.

One scam operation in Sihanoukville also released seven Thai nationals “on the side of the road” for police to take into custody, according to Thai police media.

A Thai police official would only confirm with a reporter over messaging app Line that they were conducting raids to rescue Thai nationals, and did not provide details.

The Royal Thai Police’s media channel estimates that there are some 1,500 Thai nationals in scam operations in Cambodia, which are based in hotels, complexes and abandoned buildings.

Thai citizens are among those who claim to be scammed out of large sums of money by cryptocurrency platforms and phone scams, and victims include high-profile Thais, from celebrities to a Thai PBS news anchor who said she lost more than 1 million baht (almost $30,000) to a scammer pretending to be a police official in Thailand’s Rayong province, according to news outlet Khaosod English.