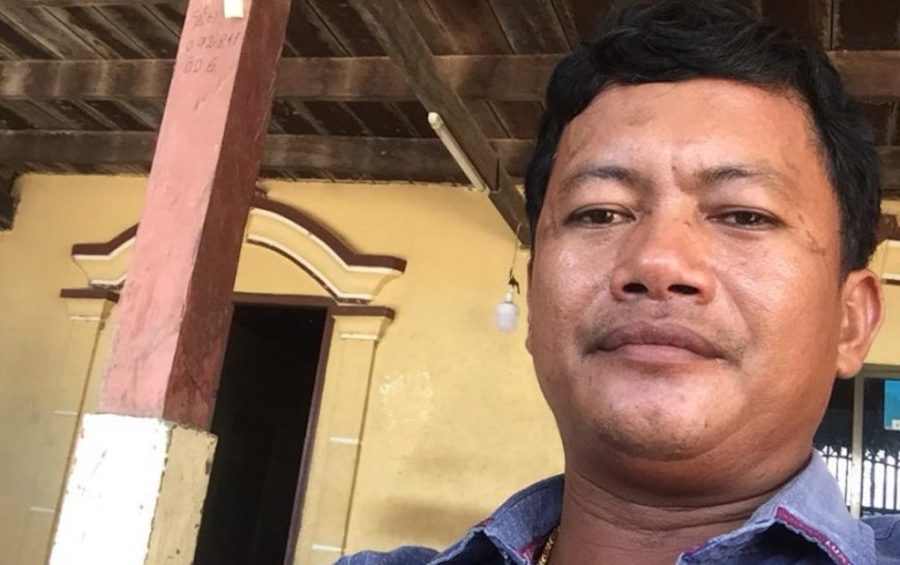 Three more members of the outlawed opposition CNRP have been charged over their expressions of support for exiled party leader Sam Rainsy’s planned return, with one man arrested on Tuesday for “plotting an attack,” according to his wife and court documents.

Dong Sovannarith, a former CNRP youth group leader in Kampong Cham province, was arrested by four plain-clothes police officers on Tuesday morning while he was having breakfast at his home, said his wife Nhan Sok Keang.

“It is not fair because they came without a warrant, and in civilian clothes and not in uniforms, and did not share any information, just told him to get in the car,” Sok Keang told VOD.

She said authorities brought Sovannarith, 47, to the Batheay district police headquarters for questioning but she did not know the reason for his arrest.

Since the CNRP was dissolved by the Supreme Court in 2017, Sok Keang said her husband has not been involved in politics.

“He focused on his business, selling bus tickets, and he did not agree, even when people wanted to meet at home [to discuss political work] because he was afraid of it affecting the business,” Sok Keang said.

About 30 members of the banned opposition party have been arrested and detained this year in relation to their support and alleged organizing in preparation for Rainsy’s planned return on November 9.

More than 150 others have been summoned for questioning by police or the courts and two CNRP supporters — an ex-commune chief and a former bodyguard for Rainsy — have been left bloodied by unidentified men wearing motorbike helmets in daylight drive-by attacks in Phnom Penh.

Government officials have said statements backing the return of Rainsy and other senior exiled CNRP leaders amounted to support for a coup, and those expressing support would be prosecuted.

Rainsy has vowed to return after about four years abroad in an effort to “take back” the country from Prime Minister Hun Sen and restore the CNRP. The party has said it would have funds available for defecting soldiers, and Rainsy has previously called on soldiers and rivals within the ruling CPP to stand up against the government, though he has denied allegations that he is calling for a coup.

On Tuesday, Batheay district police chief Sam Nal confirmed Sovannarith’s arrest and said he was sent to the Kampong Cham provincial police headquarters since the morning.

Chum Narann, a spokesman for the provincial court, said a prosecutor had issued the arrest warrant for Sovannarith prior to Pchum Ben day on September 28, and had charged him with incitement to commit a felony.

However, a court statement dated Tuesday said Sovannarith was charged with “plotting an attack,” which carries a sentence of up to 10 years in prison.

He was charged in relation to an alleged attempt to overthrow the government under “the plan of the criminal Sam Rainsy’s return,” and was accused of gathering people in Batheay district to disseminate information and take a photo with raised hands as a sign of support for Rainsy, the court said.

Rainsy has called on supporters to join a “nine-fingers” campaign in which they raised nine digits in reference to the 9th of November, when he has said he will return to Cambodia.

Officials have vowed to arrest him and other CNRP leaders if they attempt to enter the country.

Another man, Mao Vibol, chairman of the CNRP’s Svay Rieng provincial executive committee, was charged with plotting an attack and incitement to commit a felony last week, according to a Svay Rieng Provincial Court statement dated Thursday.

Vibol, 37, from Svay Chrum district’s Kok Pring commune, was accused over his appeals on Facebook and during an interview with Radio Free Asia (RFA) in August and September in which, according to the statement, he expressed “his support and participation in implementing the attempted plan to hold a coup d’etat.”

CNRP youth activist Rin Roath told VOD that Vibol had eluded authorities and was in hiding to avoid arrest. The charges carry a combined maximum penalty of 12 years in prison.

The court statements noting the charges against both Vibol and Sovannarith state: “If those involved come to confess in a timely manner they may be exempt [from prosecution] under the special provision of Article 454 of the Criminal Code.”

The code states that anyone who has participated in plotting an attack is “exempted from penalty” if the person informs authorities before they are prosecuted of the existence of the plot and its participants.

In another case, Mounh Sarath, a former leader of the CNRP working group in Oddar Meanchey, was charged with plotting over comments made during an interview with Voice of America (VOA) on Thursday, according to a statement from the provincial court.

The court said that Sarath had gathered people working in Thailand to participate in a plan to topple the government when Rainsy returns to Cambodia in November.

An Oddar Meanchey Provincial Court official said a prosecutor had requested an arrest warrant for Sarath, which would be issued by the judge soon.

Sarath, who is living abroad, on Tuesday called the judiciary a tool for the ruling party and said it has never provided justice to opposition politicians.

He said he gathered people to welcome Rainsy as a way to push the government toward a national reconciliation and to avoid international sanctions.

“We want Cambodia to respect democracy and respect human rights and improve it. We want the government to respond to the demands from the international community that wanted to see Cambodia respect democratic principles and [make] no threats against the opposition party’s freedom like what is happening at the moment,” Sarath said.

The E.U. and the U.S. are currently reviewing Cambodia’s preferential trade agreements over labor and human rights concerns, including political rights.

Mu Sochua, a vice president of the CNRP who lives abroad, said she considered the fresh charges — and branding of the opposition as traitors — as pretexts to continue suppressing the opposition and people who want to see an improvement of the nation’s rights situation.

“Calling the return [of opposition leaders] a national betrayal is a pretext to keep suppressing and denying the people’s rights,” she said.