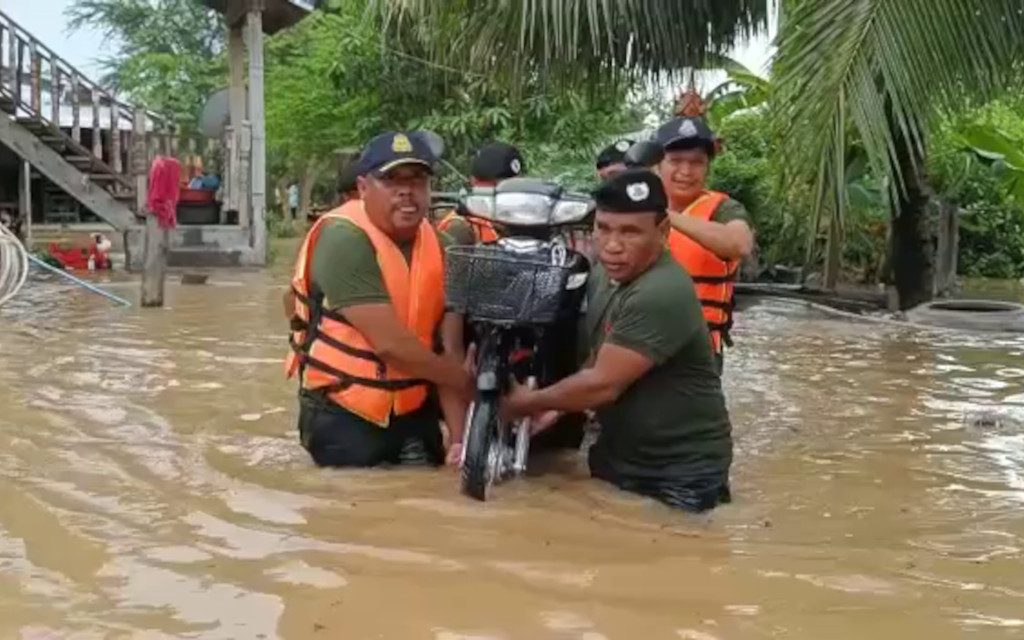 A deputy village chief has come to the aid of families affected by flooding in Banteay Meanchey’s Malai district, as rains lashed the area and inundated crops and homes.

Heavy rains have caused flooding in Malai district’s O’Sampoar and O’Sralao communes, affecting residents in the area and leading to a number of evacuations, said deputy Malai district governor Eng Samon on Thursday.

Samon was not sure how many people were affected by the flooding, but said the low-lying region had flooded similarly to areas across the border in Thailand.

Tae Long, deputy Phum Thmey village chief in O’Sralao, said heavy rains had hit the commune on Wednesday and flooded the entire village. Of the 160-odd families in the village, five had to be moved out of their homes, and they were now housed at his home, he said.

“It has been raining since yesterday and put some parts of the village under 3 meters of water,” Long said.

In addition to displacing families, around 60 hectares of cassava farms had been affected by the incessant rain, he said.

It was routine for the commune to see torrential downpours during the monsoon season, he said, adding that the rain had eased off as of Thursday.

Chea Lip, 35, is one of the villagers enjoying Long’s hospitality. She said that around 8 p.m. Wednesday water reached the ground floor of her stilted house and her family had to leave their possessions to get to safety.

“We could not manage to take our property out of the house on time, as the only important thing we could think of was to take our two children aged under 10 to the safe place as quickly as we could,” she said.

She said Long’s house was only a little inundated, and because there was no government building nearby, like a school, the deputy chief allowed them to stay at his house.

They were struggling to cook meals, she said, because all their possessions were still underwater, and they were having to buy food from their neighbors. This was hard because she was a day laborer and only able to make ends meet for the family.

“The rain keeps raining, as far as I can tell, so it might get more difficult if we need to stay here for a long time.”

The Ministry of Water Resources and Meteorology on Monday released a statement announcing there was a possibility of heavy rain across the country from September 7 to 13.

Correction: An earlier version of this article misstated Eng Samon’s position as deputy provincial governor. He is deputy district governor.