Violence Flares Up Again at NagaWorld Protests as Negotiations Stall 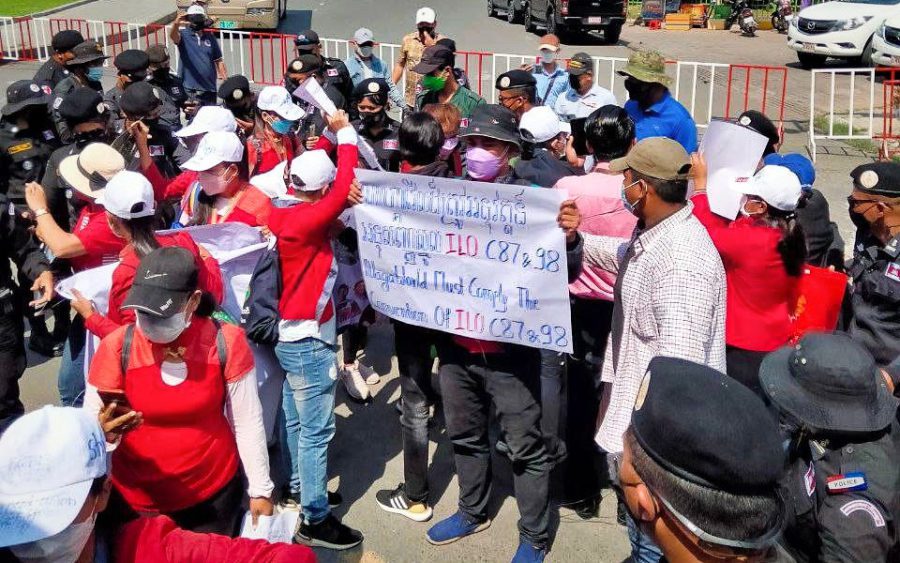 The stalemate between NagaWorld executives and laid-off workers continued as a fourth negotiation meeting at the Labor Ministry failed to deliver a resolution.

The meeting was held Tuesday afternoon as more than 200 NagaWorld workers were again met with violence as they attempted to resume their demonstration, and were again packed into buses and driven around the capital.

Outside the Labor Ministry, Sun Sreypich, one of the workers’ negotiators, said the meeting had discussed the reinstatement of workers for over two hours — a point workers have said is a top priority for negotiations.

She said NagaWorld was against reinstating workers because the company had already decided on the redundancies.

She claimed that there were around 350 people who wanted to voluntarily leave the casino and that around 200 workers could be swapped in for people choosing to quit. Sreypich recalled that NagaWorld had indicated that it wanted to further reduce staff, and suggested the swap system would result in a reduction of around 150 workers.

“We talked again and again. I can say I bargained with them to accept the first point,” she said, referring to the demand for reinstatement.

She added that the ministry said another meeting would be scheduled for next week. The ministry had previously said there would be only three meetings and that the parties could then approach the courts, but also scheduled today’s meeting.

Around 220 workers made their way to the casino complex Tuesday afternoon, where video footage uploaded to social media showed them shoved and pushed against security personnel, including plainclothes security officials.

One official routinely seen at the protests was seen on video slapping a worker on the head and then trying to drag away the same worker.

“They solve it at the Ministry of Labor, why don’t you go to resolve it? There are illegal strikes every day and every day I am very bored,” he is heard shouting at workers in one video.

Later, police released photos of the security officer with scratch marks on his arms. The same officer has harassed journalists and human rights monitors at the protests.

Tim Satya, one of the detained workers, said it was worrying that the authorities were escalating the violence used with strikers.

“It is my first time seeing the bad actors from the authorities pushing women workers in front of my face. They don’t listen to us that we have a problem with NagaWorld,” she said.

“They have a big body and pushed me and others. I am shocked and I am afraid but I and the others will still keep striking everyday.”

Meanwhile at the Appeal Court on Tuesday afternoon, judges denied a motion from eight NagaWorld unionists — who were released earlier this month — asking for the investigating judge in their case to visit the protests and for workers to be questioned in the presence of the authorities alleging their involvement in incitement.

Sam Chamroeurn, the workers’ lawyer, said the court had upheld the lower Phnom Penh court’s decision to deny the motions.

Khlaing Soben, one of the workers who attended the hearing, said it was not surprising their motion was denied. “We knew beforehand that there would be no justice for us,” Soben said.

Court spokesperson Sreng Souyeat could not be reached for comment on Tuesday.