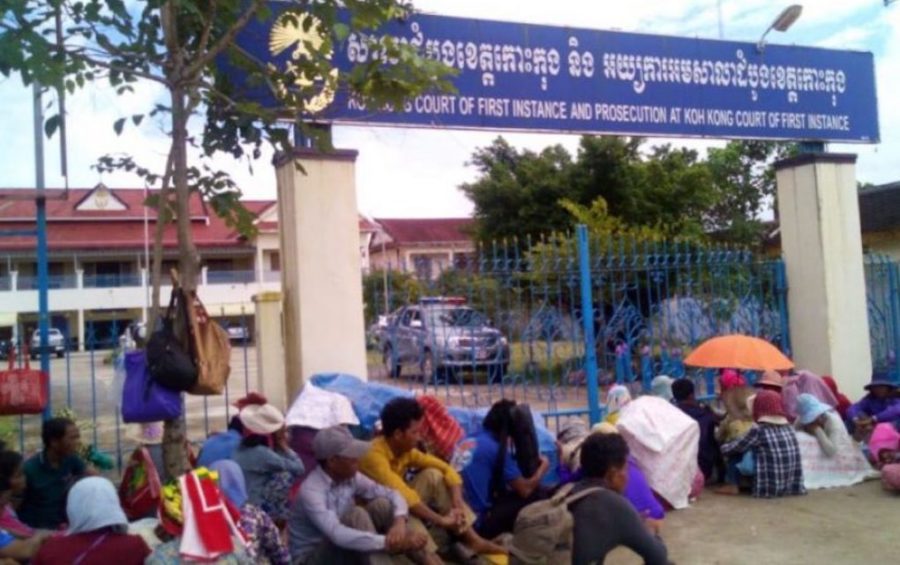 About 100 villagers gathered in front of the Koh Kong Provincial Court to support community members summoned for questioning, on September 18, 2019. (Supplied)

UPDATED 1:40 p.m. — About 100 Koh Kong villagers gathered outside the provincial court on Wednesday in support of community members who were questioned over a dispute with sugar plantation Heng Huy.

About 200 families claim to have lost land in Sre Ambel district to the company since 2007. They protested at the Land Ministry in Phnom Penh in early July, but the ministry denied their claims and requested legal action against them instead.

Last month, the families said that 10 representatives of the protesters had received court summonses for defamation and incitement.

Two were questioned yesterday, while two others were scheduled for questioning today.

Kirt Nov, who was questioned on Wednesday, said the court prosecutor had read out Heng Huy’s complaint to her and asked her when she moved on to her land and how many hectares she owned.

Nov said she had farmed the land since her great-grandparents’ generation.

The prosecutor also asked her whether she had documents proving her land ownership, which Nov said she did not have since local authorities had never registered her plot.

“Since I started to farm on the land, no authorities came to stop me or claimed it was the company’s land or that it belonged to anyone else,” she said.

Only in 2007, when Heng Huy used machinery to clear the land did the company contest her claims, she added.

Det Hour, a representative of the protesters who was also called for questioning on Thursday, said on Wednesday that the villagers were victims of land-grabbing and demanded that the court drop the cases against them.

“I feel very hurt. We lost a lot of land but instead, oknha Heng Huy accused us of defamation. I spoke the truth. I have not defamed him,” she said. “I would like to appeal to the court to … not favor the rich and powerful individuals, while mistreating innocent people.”

Other supporters at the court on Wednesday also called for the cases to be dropped.

Pen Vuthea, a monitor with human rights group Licadho in Koh Kong, said that the court summonses, based on a complaint from the Heng Huy company, amounted to a threat against villagers to end their protests.

Vuthea asked that the court clearly investigate the cases to avoid making a wrong decision that will affect the people’s rights.

“The court must look into the actual reasons of the people and the specific reasons for their claims and whether the people publicly told a lie,” he said.

The Land Ministry has three times rejected the protesters’ requests for intervention. On July 1, the ministry claimed it had already found solutions for 987 families in the land dispute, though Licadho said the 987 had been in a dispute with a different sugar plantation in Koh Kong. On August 9, the ministry revised its reasons for rejection, saying it had already solved the dispute for 148 claimants, who had received land titles.

Nov, who was questioned on Wednesday, said the previous compensation was for people in another area and not the families in Chi Khor Loeu commune’s Tany village.

Correction: The article originally said that Heng Huy company had cleared land in 2017, according to a villager, Kirt Nov. In fact, Nov said the company cleared the land in 2007.