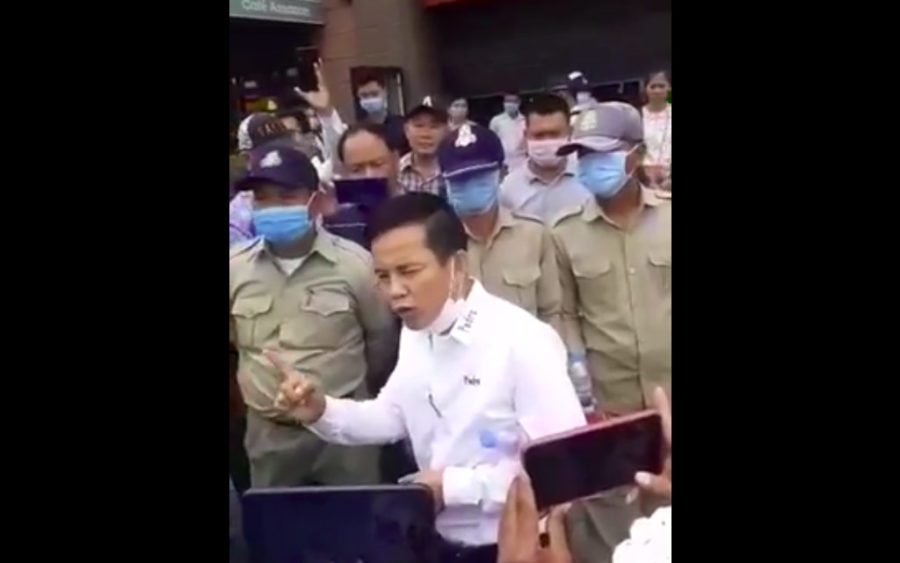 Pen Chansangkream, a former CNRP district councilor in Phnom Penh, speaks at a protest on August 13, 2020, in a video provided by the CNRP.

As many as 28 former opposition party members from Kampong Cham have been summoned to appear in the provincial court over accusations of incitement, while a former CNRP district councilor for Phnom Penh also faces questioning for alleged incitement to disturb social security in the capital, the CNRP said.

Senior CNRP officials living outside Cambodia provided a list of 28 former opposition party members from six districts in Kampong Cham — including commune councilors, provincial youth party members, a deputy village chief, commune chief and other representatives — who were allegedly summoned between August 3 and September 2 on accusations of incitement to commit felonies, with one accused of plotting.

Chhorn Chandet, the provincial court’s acting chief of secretariat, said he was aware of 11 accused or witnesses being summoned in late August when asked about summonses for ex-CNRP officials, though he could not provide any of their names. Additionally, he confirmed that two people among the list of 28 names, Loch Sophal and Muth Sok Khem, were summoned to show up on Wednesday, based on a court order from Kampong Cham deputy court prosecutor Sothea Piseth dated August 4.

Eight others had been summoned as accused or witnesses to incitement in late July, he said.

CNRP vice president Mu Sochua said those who had heeded the summonses had been questioned but not detained.

Kampong Cham provincial police chief Em Kosal said he was in a meeting and could not answer, while Kang Meas district police chief Chea Chuon said he was too busy to comment. Provincial court spokesperson Hak Horn said he had no immediate information available.

Sam Sokong, defense lawyer for Chansangkream, confirmed Sunday evening that his client was summoned to the municipal court for questioning. When asked whether his client would appear in court before the deadline, Sokong deferred, saying on Monday that he would wait and see.

Court spokesperson Kuch Kimlong could not confirm any details about Chansangkream’s case when reached on Monday.

Chansangkream was seen criticizing the government’s stance on border disputes with Vietnam and immigration policy in a video taken during protests on August 13 for the release of unionist Rong Chhun, who was detained on incitement charges after making comments about the border along Tbong Khmum province. Hours after that rally, six participating activists were arrested, with activists Chhoeun Daravy and Hun Vannak detained on incitement charges, while the four others were released.

In the video, Chansangkream said he attended the protest to express himself and monitor law enforcement, bashing authorities for violating the law while claiming to follow it.

“The person who orders you around every day is a criminal boss,” he said. “They themselves have cars, have high positions, villas and quietly order you around through walkie talkies.”

The former councilor said in his speech that he had been threatened for his opinions before, and he had informed the U.N. to pay attention to his case, but he was willing to sacrifice his life.

“I want to tell you all in short that if there was no problem, I would not be using my head to block your stick or shoes,” he said.