300 Workers Protest Over Lack of Pay, Markets Set to Reopen 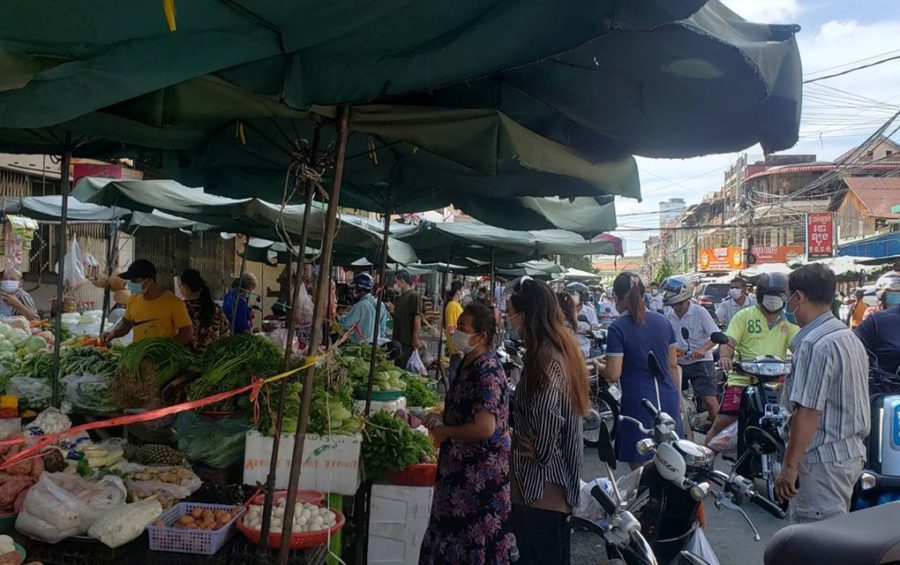 Phnom Penh’s public markets will reopen from Monday, City Hall has announced, as workers protested on Veng Sreng Blvd. near former red zones despite the further easing of restrictions, this time over lack of pay.

About 300 workers blocked the road in Pur Senchey district on Thursday, demanding that factory owners pay them half of their April salaries as the government previously announced.

Lai Samphors, a worker at Choam Chao I commune’s Canteran Apparel garment factory, said the workers protested on Veng Sreng Blvd. for about an hour from around 12:30 p.m.

“I am in a very difficult situation. The workers are facing difficulties and backed into a corner, leading to the blocking of Veng Sreng. It is our last resort,” Samphors said.

The workers were concerned about possible Covid-19 transmission by gathering for the protest, and it was under the hot midday sun, she said. However, “there is no choice so we have to block the road,” Samphors said.

Another worker, Chum Sath, said they had been paid $50 of what was owed, with the remainder promised on May 27.

“We pay $50 just for our rooms. It is not enough. And [there’s] the cost of food, payments to the bank, payments for milk for the baby, some for parents for their treatments, and daily expenses,” Sath said.

The factory and district administration said later on Thursday that the problem was now solved.

Lev Kimbou, the factory’s administrative head, said the company had agreed to pay the April salaries as owed to workers.

They had also asked for seniority pay, but the company asked for a delay until the middle of June, he said.

“We have negotiated in stages. They agreed to get what the company pays them but not the seniority pay,” Kimbou said. “Please give the company some time to work on getting revenue to pay for the [seniority] remuneration on the 15th of June.”

However, Sann Sopha, a representative of the Collective Union of Movement of Workers, said it was her understanding that the factory had not agreed to pay more than $50.

District and Labor Ministry officials had intervened in negotiations on Thursday, but workers felt they favored the factory, Sopha said.

“They did not weigh the scales equally. It seems that there is no confidence,” she said.

Labor Ministry spokesperson Heng Sour could not be reached.

The workers said about 500 were currently employed at Canteran, and about 100 of them had returned to their home provinces due to concerns over Covid-19.

Meanwhile, Phnom Penh City Hall announced on Thursday that all public markets would be reopened from Monday, but informal markets such as those around factories and hospitals and along streets would remain closed to prevent Covid-19 transmission.

Markets were still not allowed to have people eat on the premises, but the sales of takeaway as well as daily essentials would be allowed, the statement said.

It said the number of customers allowed in at one time must be limited to allow social distancing of 1.5 meters. All staff must wear masks or face a fine from 200,000 to 1 million riel, or about $50 to $250.

The spread of Phnom Penh’s recent outbreak — which led to a citywide lockdown before a recent easing of restrictions — was centered around garment factories as well as major city markets such as Prampi Makara district’s O’Russei and Toul Kork district’s Doeum Kor.