A Cry for Help After Primary School Burns Down 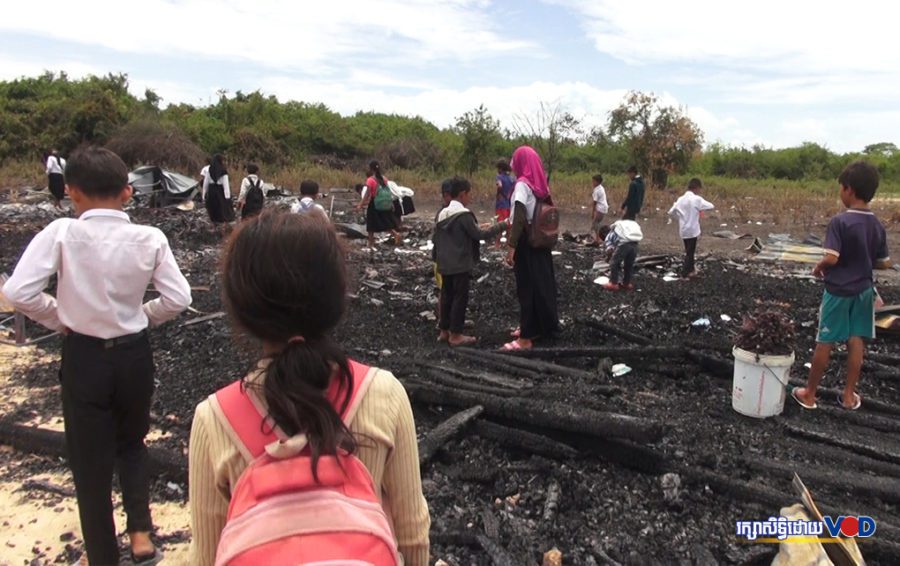 A group of students were witnessed the scene of their school burn down in Kompong Chhnang province. Image: Khut Sokun

KOMPONG CHHNANG — Dozens of students read aloud while their teachers show them how the read the Khmer language — but this lesson is not happening in their normal classroom.

Instead, these pupils are studying at the local pagoda after their entire school burned down to the ground.

The only three buildings of Yukanthor Primary School in Boribo district’s Chhnok Trou commune in Kompong Chhnang province were destroyed by a fire on June 9 while the rest of Cambodia was busily celebrating Solidarity Noodle Day.

School director Nuon Bora said that the school was now faced with a shortfall of “everything” — from the buildings to basic equipment such as stationery.

“Now, if we are talking about the difficulties in this time, we have total difficulty, because the whole school was burned down, including documents, equipment — we could not even get out a single pen,” Bora said.

“It means that this school will all be new, because nothing is left.”

In the meantime, the school’s organizing committee had asked the pagoda to allow the teachers and students to use their public hall for classes, he said.

Standing and looking out on the debris of the school that burned down, Chheav Udom, a grade-five pupil, said he was sad to see such a bleak end to his primary school, which he described as “nicely decorated” and a good study environment.

“We have a bit of difficulty when there is no proper school,” Udom said, calling for people to help in any way they can. “Some of us are very poor and we also want those poor students to be helped because they do not have books to use.”

Srey Samnang, a father of one of the pupils at the Yukonthor Primary School, said that he was worried about the impact on his children’s studies after their school was destroyed by the fire and now they do not have a proper place to study.

Samnang said most of the families with children studying at the school were poor and did not have much ability to support the school now with extra resources.

“I feel regretful because there is no school for the kids and I do not know what to do. I ask for help with a new school as soon as possible and not only for my kids but for the whole community because the community here is very poor,” he said.

Boribo district education office director So Chamroeun said after he heard of the incident he informed the provincial authorities and asked them to help rebuild. For the time being, some NGOs were helping by providing basic equipment, he said.

But he appealed for more help.

“Please provide a building with six rooms, a toilet, a dormitory for teachers and also lightning-protection equipment,” Chamroeun said.

Bora, the school director, said the school was established in 2005 and had 226 students. For six months of the year, the school was completely flooded due to the rainy season, he said, adding insult to injury over the school’s dramatic end.

“I would like to ask government leaders and donors to help our school,” Bora said, explaining that anything would help. “If you cannot help with a new school on time, please provide school materials for teaching and emergency sanitary equipment.”