Accused Tell Court That Protest Was Exercise of Freedom of Expression 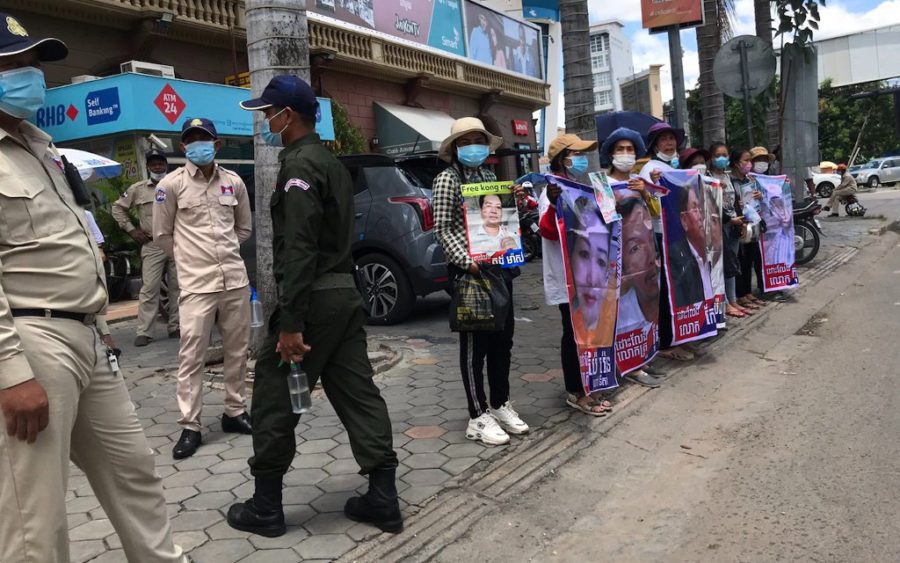 Three women on Thursday testified that they had traveled to rally outside the Chinese Embassy because they felt hurt by social injustices, as they faced up to two years in jail for their protest last October.

A second trial hearing was held on Thursday into protesters charged with incitement after a rally outside the Chinese Embassy last October on the anniversary of the 1991 Paris Peace Agreements. They were submitting petitions to embassies around the capital about upholding the accord’s goal of bringing multiparty democracy to the country.

There are nine defendants in the case, including two at large. Before Thursday morning’s hearing started, three of the seven defendants present sat in the courtroom holding hands and encouraging one another.

Three defendants remained to be questioned.

Sat Pha, 47, told the court that she protested on October 23, 2020, because she wanted the peace agreement’s signatory countries to help Cambodia.

Judge Ouk Reth Kunthea asked her: “Do you know the meaning of October 23?”

Sat Pha said: “I knew that the government wanted to get rid [of it], so as a citizen, I have to make demands.”

Like other defendants before her, Pha said she had on her own accord, not because anyone had told her to protest.

She was a resident of Phnom Penh’s Boeng Kak former lake, and the victim of a land dispute. She always joined protests to demand the release of other activists, she said.

“I feel pain over the land dispute,” she said. “I protest to demand for the release of prisoners.”

She had relatives in jail, and had faced violence at the hands of officers during protests, she said. “I’m in pain,” she said.

Sann Srey Neat, from Takeo province, told the court that she considered her participation within democratic lines.

“I am a citizen. I felt hurt when [I] saw injustice. I did not do anything besides demanding rights, living in peace, and didn’t want to have the abuse and arrest,” said Srey Neat, 41.

She asked authorities not to use violence against people who are empty-handed, and that they just wanted to correct the government.

The widow and the mother of two said she had seen previous protests in Phnom Penh when she came to the capital to buy goods. She became interested and contacted other women on Facebook.

Judge Reth Kunthea asked: “Did you ever think your protest would cause chaos?”

Srey Neat answered: “There is no chaos. Other countries also have protests. I don’t hit the things of other people. The one who was wrong is the authorities.”

She added: “I have the right to live and express myself. [I] want my own country to be good and want the leaders to do good things.”

Deputy prosecutor Chhay Hong said she had no permission to hold this protest.

“I did nothing wrong. I am not a robber. This is my country and I have the right to protest,” Srey Neat said.

The last defendant to be questioned, An Hong 45, said she had become interested in protesting after the arrest of unionist Rong Chhun, who had claimed Cambodia was losing land to Vietnam. She saw protesters when she brought her grandchildren to a Phnom Penh hospital, and contacted them on Facebook, she said.

She traveled to Phnom Penh two days before the Chinese Embassy protest on her own dime, she said.

But Judge Reth Kunthea questioned the source of her funds: “Who spent it for you?”

The 45-year-old woman said she loved and respected two things: religion and the nation.

“I felt hurt when I saw authorities beat up people. People were there with bare hands and phones and they were beaten up,” Hong said.

When she said that Article 41 of the Constitution guaranteed citizens’ rights to expression, Judge Reth Kunthea told her not to stray from the case and use useless words.

Deputy prosecutor Hong said she needed permission. “If we are doing the right thing, why were we not allowed? If you are a good citizen, you need to wait for legal permission first. If everyone does not follow the law, it will cause chaos all over the country.”

During the hearing, about 10 women stood in the public gallery holding posters. Outside, according to a video posted online by the Cambodian Center for Human Rights, women protesters faced further violence from authorities.

Deputy prosecutor Hong’s closing remarks pointed out that the protest had no prior permission, and one the defendants, Lim San, had admitted to receiving money from abroad.

“If there was no support from overseas, this activity would not have gone smoothly,” he said.

Defense lawyer Sam Sokong said his clients only tried to submit a petition to Chinese Embassy because they believed in the importance of the Paris Peace Agreements for democracy and human rights. They were to continue to the French and U.S. embassies, he added.

“Authorities should encourage those who work for society and should not arrest them. They just submitted a petition,” Sokong said. “It is nothing against the law. It is the exercise of their rights as a citizen.”

The money sent to San was charity for medical treatment, he said.

The seven defendants present all asked the judge to drop the charges against them and let them be free. A verdict is scheduled to be announced in the afternoon on August 2.

About 100 meters outside the courthouse, Ton Srey Liep, the sister of defendant Ton Nimol, said she had come hoping to see Nimol. She hadn’t seen him for five months as prison visits were not allowed due to Covid-19.

“I had not heard a single word and how he is. [I] don’t know at all,” she said. “I came here with empty hands and only food and water and wanted him to eat.”

She said all Cambodian children were taught about the Paris Peace Agreements, and she hoped her brother would be freed.