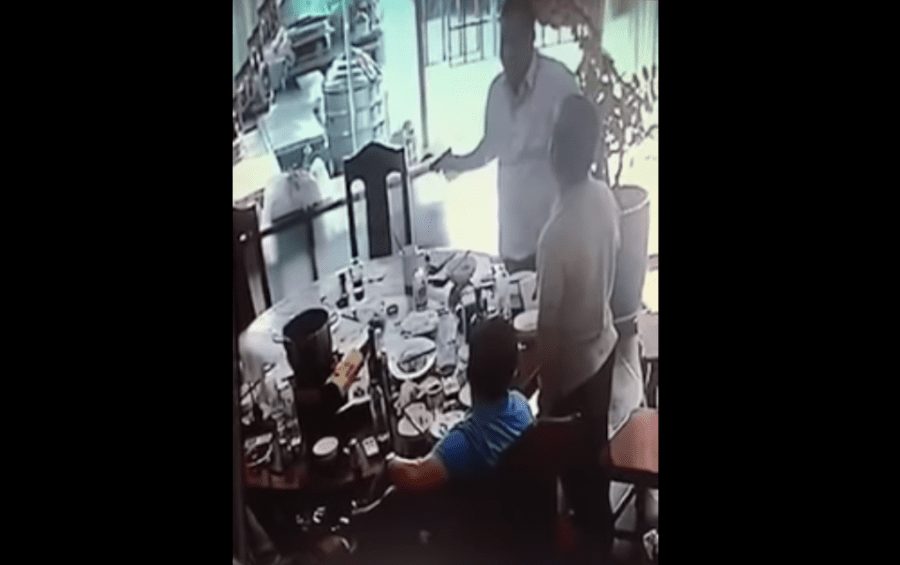 An anti-terrorism officer arrived uninvited to a noodle restaurant’s Pchum Ben duck soup party, got drunk, pulled out his gun, and threatened to kill the restaurateur and his wife, alleges a complaint lodged against him at the Phnom Penh Municipal Court.

Thlang Phinra, the anti-terrorism bureau chief at the Interior Ministry and a registered lawyer, has now been called in for police questioning over the incident, National Police spokesperson Chhay Kim Khoeun said on Wednesday.

According to the court complaint, dated Tuesday, Phinra crashed the party at Tuol Kork district’s Angkor Chum noodle restaurant around midday on Sunday.

The restaurateur, Chuy Sokheng, who filed the complaint, had closed his shop for the Pchum Ben holiday and invited about eight friends to have duck soup. Phinra walked in uninvited, but the two men knew each other so the anti-terrorism officer was allowed to stay, the complaint says.

But Phinra got drunk and rowdy, and the two men started arguing.

According to the complaint, Phinra told Sokheng that if the officer wanted to have the restaurant closed, he could call authorities to come at any time and have Sokheng handcuffed — if the owner continued to challenge the officer.

“I will call [Sar] Thet to come and close your restaurant right away,” he allegedly said, referring to the Phnom Penh police chief.

Then, Phinra aggressively pointed his finger at others around a table, used harsh language, and cocked and brandished his handgun, pointing it at Sokheng, 53, and his wife, and threatening to kill them, according to the complaint and three-minute surveillance video clip released by government-aligned media outlet Fresh News.

In his complaint, Sokheng demands $100,000 in compensation and for Phinra to be prosecuted. The restaurateur also submitted the surveillance camera footage, which shows a man in civilian clothes sitting at the table with three other people.

Sokheng’s wife, Pov Dina, 30, told VOD that she had yet to be questioned about the incident. “I want the authorities to find justice for me and implement the law,” she said.

Kim Khoeun, the police spokesperson, said the acts seen in the surveillance footage appeared to be illegal, and Phinra could face administrative and legal consequences depending on whether the officer and restaurateur could reach an agreement.

“Even if they get along, he will still be punished for violating the force’s disciplinary rules,” Kim Khoeun said. “If there is no agreement … [and] they push [the case] to the court, we will follow the procedure.”

Court spokesperson Kuch Kimlong said prosecutors had received the complaint and the case was being processed.

Liv Sovanna, deputy secretary-general of the Bar Association, said the association’s disciplinary council was now considering the case, noting that any member found guilty of a crime would be removed.

“If we get a final decision from the court sentencing him in a criminal case … we will take action and remove his name from the list of lawyers,” Sovanna said.

Making a death threat carries a potential penalty of six months to two years in prison and a fine between 1 million and 4 million riel ($250 to $1,000.

National Police deputy chief Y Sokhy told VOD on Friday that Phinra had been suspended while the court case proceeds.

“We disciplined him by taking his gun and suspending him from work,” Sokhy said. “He will make himself available to the court.”

National Police will decide on whether to remove Phinra from the force once the court reaches a verdict, he said.

Updated on September 25, 2020 with Phinra’s suspension.

Additional reporting by So JayaUdom