At Floating Village, Children Drift Away From Schooling 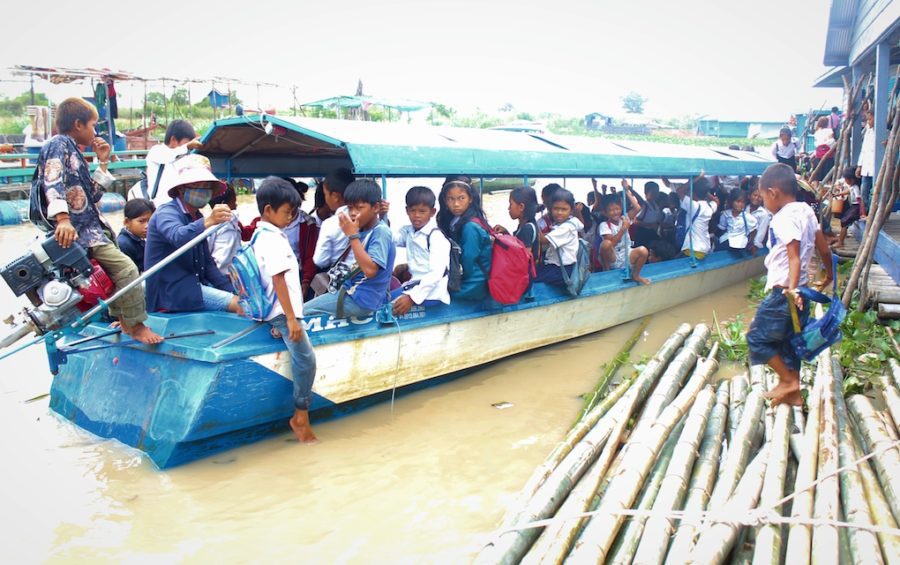 Children, some from a young age, are enlisted to help their families catch fish, and many drop out of school to contribute to the family trade.

Kheng Tikhea said he wanted to pursue higher education but had dropped out of school four years ago at grade 7 to fish.

Tikhea, now 18, said his classes had been somewhat haphazard anyway, with students missing school for months at a time depending on the season.

“Some children can’t catch up with other students and decide to stop and go to work,” he said. “I dropped my studies because of the poor living conditions of my family.”

Yi Rith, 43, said only two of her six children went to school. One was in grade 7 and the other grade 12, both studying in Siem Reap under the sponsorship of a Korean organization, she said.

“My other four children don’t go to school. They scavenge — even my little 7-year-old boy,” Rith said.

There was only a primary school locally, and “we don’t have the means to send our children to school,” she said.

Leng Kheng, Kbal Taol’s deputy village chief, said the issue was widespread in the village due to poverty.

According to figures kept by Koh Chivaing commune, Kbal Taol has a population of about 800 families including 3,000 people. More than 1,000 are children aged between 6 and 17.

The village is predominantly Khmer, unlike many floating villages around the country populated by ethnic minorities.

Tiv Piseth, the director of Kbal Taol Primary School — which has two floating schoolhouses — said there were more than 500 primary school-aged children in the village but only 262 were enrolled.

Currently, he had only 10 students in grade 6 and expected few would go on to secondary school. Most years, just two or three Kbal Taol Primary School graduates continued their schooling, and some years none did, he said.

In recent years, Cambodia has made strides in raising nationwide school attendance rates, from 82 percent enrolled at the primary school level in 2007 to 90 percent nationwide in 2017. But rural areas continue to see many children dropping out, particularly once they finish primary school.

The numbers are nevertheless an improvement from 81, 25 and 8 percent for primary, lower secondary and upper secondary schools, respectively, for rural areas in the 2007 Socio-Economic Survey.

Education Ministry spokesman Dy Khamboly said the ministry provided educational opportunities for all and promoted schooling across the entire population.

But he acknowledged that school dropout rates were still a problem, despite recent progress.

“We’ve reduced dropout rates a lot as well as the rate of students being held back a grade. Compared to previous years, they are really small percentages,” Khamboly said.

A Transparency International survey from 2014 said school access had become easier for almost all respondents thanks to increasing numbers of schools and teachers and, to a lesser extent, better roads, more encouragement from parents and easier enrollment processes.

San Chey, executive director of the Cambodia-based Affiliated Network for Social Accountability in East Asia and the Pacific, said some demographics remained vulnerable to under-education, notably families who migrated and those who lived in poor, remote areas.

It was important to assess and address the root causes behind children being kept out of school, he said.

“There needs to be serious conditions imposed on parents to guarantee they will not take their children out of school to work as child laborers,” he said.

Hok Ranoa, a teacher at Kbal Taol Primary School, said that even his enrolled students were always in and out of class because they were busy with fishing, making it tricky to follow a fixed curriculum.

“We find it hard to teach,” Ranoa said.

The school year would often start with very few students, and as more joined the classes, they would already be behind, he said.