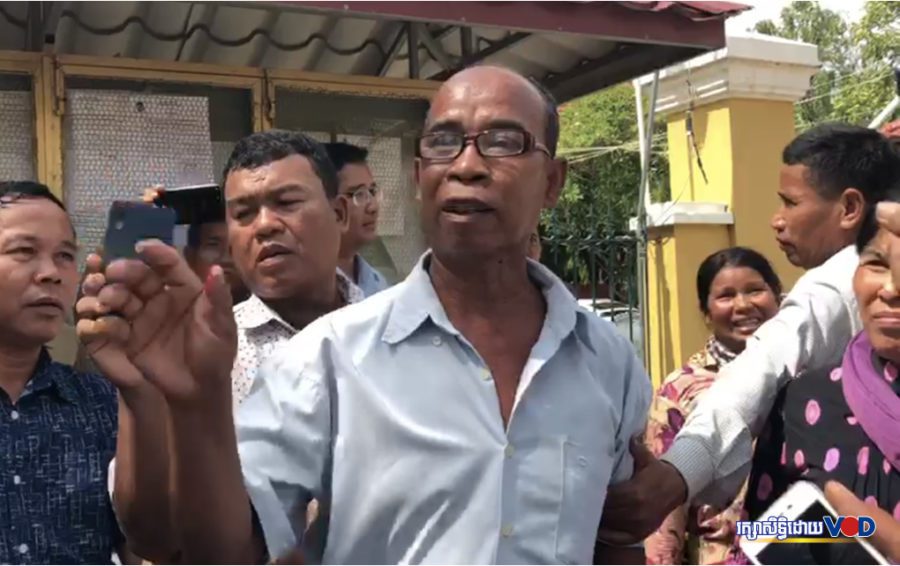 BATTAMBANG CITY — Battambang prosecutors grilled former opposition officials about going to a colleague’s noodle restaurant in the city, and warned them that their voices could be a “threat to national security,” one of the questioned officials said.

Former commune chiefs Ton Samorn and Roeun Kem and ex-commune councilor Sam Vong Dara were the first to be questioned at the Battambang Provincial Court on Wednesday morning amid a wave of summonses that have been issued against former members of the Cambodian National Rescue Party (CNRP) in Battambang province.

Kem, 60, told reporters outside the court that he had been questioned for about 30 minutes about eating noodles at former CNRP colleague Sin Chanpeou Rozeth’s noodle restaurant in Battambang.

Deputy court prosecutor Keu Bunnara had asked him about what he talked about there, what he later posted to social media, and who told him to go, Kem said.

Asked if there were any other questions, Kem said he was warned by Bunnara that as a former opposition member, his words could “affect national security.”

“He told me that the Supreme Court had already decided to dissolve the Cambodia National Rescue Party. … We have no right to say anything offensive that could affect national security.”

Ahead of last year’s national election, some of the same former CNRP officials were censured for gathering to promote a “clean finger” campaign urging a boycott of the vote.

There was little prior explanation for the recent summonses, which began to be issued last week and raised concerns over judicial intimidation. The number of those summoned rose steadily over the past few days, with sources saying the figure currently stood at 26.

More than 60 supporters were gathered outside the court at 8:30 a.m., with the crowd increasing through the morning. Local police have blocked the street, and monitors from the U.N. and local rights group were also present at the scene.

Two other former CNRP members were scheduled to be questioned in the afternoon.

The Supreme Court dissolved the main opposition CNRP in November 2017 and banned 118 of its senior officials from participating in politics.

The summoned Battambang members were local-level party officials, however, and not part of the 118-member blacklist.

Human Rights Watch issued a statement condemning the summonses, and called on the ruling party to immediately cease its harassment of the political opposition.

“The Cambodian government continues to harass numerous opposition officials in the courts and to threaten them with prison time long after the main opposition party was unjustifiably disbanded,” said Brad Adams, the New York-based organization’s Asia director.

“The government should immediately end the political harassment campaign against the CNRP and drop this latest batch of absurd court cases.”