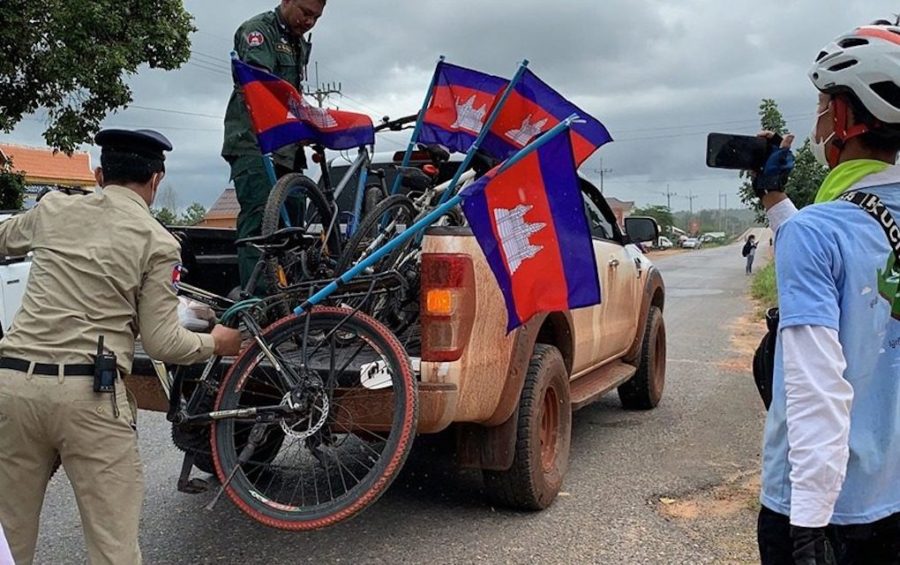 Authorities seize bicycles from activists who planned to cycle from Koh Kong province to Phnom Penh in June 2020, aiming to petition the government to make Koh Kong Krao a protected area. (Supplied)

Activists traveling from Koh Kong — first by bicycle, then by foot — aim to complete their protest journey calling for a new protected area by taxi after authorities stopped them in their tracks on Thursday for the second time while en route to Phnom Penh.

The group of about 20 youth activists say they wish to petition Prime Minister Hun Sen to make Koh Kong Krao, an undeveloped island off the coast, a protected area. But since starting their trek on Tuesday, they have yet to make it out of Koh Kong province.

Authorities on Wednesday confiscated bicycles from the environmental advocates, who then vowed to continue to the capital on foot to deliver a petition to Hun Sen’s cabinet.

However, after being monitored and stopped by police again on Thursday morning, the group planned to set off again from Koh Kong town by taxi on Friday, said Rey Reaksa, a coordinator for the cycling band of activists.

“I feel very disappointed and really wonder why authorities prevent our work when we are only youth, people who love natural resources and want to participate and protect this island,” Reaksa said.

“We are proud that Cambodia has a beautiful island,” she added.

In July last year, environmental activists launched the “Rescue Island” campaign to urge the government to preserve Koh Kong Krao as a national park, the Phnom Penh Post reported at the time. Officials this week said the government has plans to do just that, and suggested that activists had ulterior political motives.

According to the coordinator, authorities questioned the 21 campaigners at the Koh Kong district police station after they were told to go pick up their confiscated bicycles.

Police questioned them about the campaign’s intentions and who the leader was, but some activists declined to answer, Reaksa said, adding that some of the youth signed or thumbprinted police reports while others refused.

Authorities asked for the group’s petition, but activists declined to give it to them because they wanted to submit it to the prime minister’s cabinet, she said.

Preventing their awareness-raising bicycle ride “is a kind of violation of our rights and denying our freedom to do the activities that we want to do,” Reaksa told VOD. “It is a duty of youth and people who love and want to protect natural resources.”

But in a statement dated Wednesday, the Environment Ministry said a small number of young people were “pretending” to be environmental defenders by demanding to rescue Koh Kong Krao.

“This is a pretext to hide ill-intentioned political tricks,” the ministry said, adding that officials have been considering the island’s future since 2016 and planned to announce the area as a “national marine park” next year.

“The ministry hopes that this small group of youths will clearly understand and try to learn and work together with honesty in relation to authorities for the cause of the environment and natural resources and avoid creating a staged performance and to take action for political gain,” the statement said.

“The Ministry of Environment has found that the Koh Kong Krao area is home to some endangered species such as dolphins, and the ministry will set up a marine biodiversity conservation corridor that connects to Peam Krosoap Wildlife Sanctuary, Tatai Wildlife Sanctuary and to other conservation areas in the Gulf of Thailand,” he said.

On Wednesday, about 50 km into the cycling activists’ journey, authorities stopped them on the road, transported the youths and their bikes to the Koh Kong district police station, and brought them into a room one-by-one to sign police reports, said Reaksa, the activist coordinator.

But the activists refused to endorse the documents, she said.

Koh Kong provincial administration spokesman Sok Sothy said the young activists were stopped to prevent the spread of Covid-19 and because they did not cooperate with authorities.

Sothy said the cyclists should have had health examinations before their ride, in line with government preventative health guidelines.

“They are stubborn,” he said. “We tried to beg them to come make a report, but they didn’t agree.”

Suon Chamroeun, a 21-year-old member of the cycling group, said he did not believe authorities’ claims that they were stopping the activists as a preventative health measure.

“In fact, we have seen it as a threat [to us] because [authorities] blocked our way, suspended our traveling,” Chamroeun said.

Union leader Rong Chhun said he participated in the bicycle ride on its first day, and was saddened to see the group stopped while they were trying to promote natural resource protection.

Chhun called the authorities’ concerns about Covid-19 an excuse to stop the youths, and said the government instead should encourage young people’s environmental activism.

“[The government] has to give them freedom to ride their bicycles toward their goal and not block or question them about this and that,” he said. “Koh Kong provincial authorities as well as the government should be happy to see Cambodian youth participating in the protection of their national resources.”

Before deciding to forgo walking and riding their bicycles, and instead take a taxi to Phnom Penh, Reaksa, the activist coordinator, on Wednesday called the authorities’ actions against the group “very extreme.”

“Although we think of all this as a challenge to us, we are still continuing our goal to petition for the rescue of the Koh Kong Krao area,” she said. “[We will] keep walking and we will always walk if there are no bicycles, but if the authorities return the bicycles, that’s okay!”