Canadia Tower Evacuated Over Covid-19 as Suspected Contacts Kept Inside 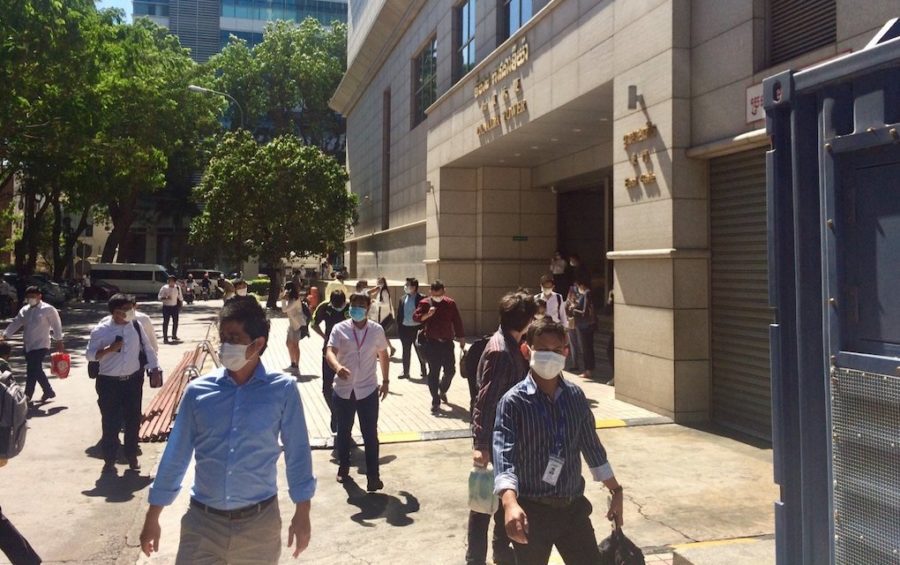 Employees working in Phnom Penh’s Canadia Tower exit the building due to a Covid-19 scare on December 3, 2020. (Michael Dickison/VOD)

Phnom Penh’s 32-story Canadia Tower office building was closed for the day on Thursday after an employee at a bank in the building tested positive for Covid-19, with hundreds of people who worked on the same floor kept inside for testing.

By around 11 a.m., employees were streaming out of the tower, all of them wearing masks and sprayed with disinfectant before exiting. Most were in business attire, while some wore the bright orange uniforms of Canadia Bank.

The Health Ministry announced Thursday morning that a 23-year-old employee of a Bank of China branch in the Monivong Blvd. building had tested positive, one of two new cases in a local cluster that emerged over the weekend.

The other new case was the man’s 21-year-old sister who works for Cathay United Bank on Street 214. The Cathay United branch was closed down for two weeks, with a notice posted at the bank saying the offices would be disinfected, and it planned to reopen on December 16.

At Canadia Tower, employees exited from the eastern rear entrance, gathering and talking in groups outside or scattering to underground parking facilities.

General manager Ma Sitha said in the late afternoon that people who worked on the bottom two floors of the building remained inside to have samples collected for Covid-19 testing.

Including volunteers for the tests, about 470 people were being tested, he said.

They included Bank of China employees as well as workers at other businesses, cleaners and receptionists in the building, he said.

How long the process would take was up to health professionals, he said, adding that he did not know yet how long the tower would be closed.

The front entrance on Monivong Blvd. was guarded by at least a dozen police officers and security guards. The Bank of China entrance on the north side of the building was shuttered.

In a statement, Canadia said the building would be closed for the day following a Covid-19 case at one of its tenants. Customers were advised to use online banking or one of the bank’s other branches around Phnom Penh.

A 33-year-old bank employee said as he left the building late morning that he was lucky he was not on the same floors as the Bank of China. “The boss allowed us to go back home,” he said. He was expected to stay home for a few days, but did not know how long. The man declined to be named, saying it might be unwelcome for his employer.

Another bank employee exiting the building said she was concerned about the Covid-19 case in the tower. “I am worried because I have small children,” she said, but also declined to be named.

A woman who answered the phone for computer store iOne’s Canadia Tower branch, on the building’s ground floor, at 3 p.m. said that she was still in the building and had not been allowed to leave. She said she would get her boss to return the call, but the number was later unavailable.

Radio France Internationale’s Phnom Penh office — which is located in the tower — announced on Facebook that they would not be broadcasting for the day due to the building’s closure.

Nineteen positive Covid-19 cases have been found in the local cluster since the weekend, when the wife of the country’s prisons director tested positive after experiencing three days of cold symptoms. Health authorities say they have not identified the source of the contagion.