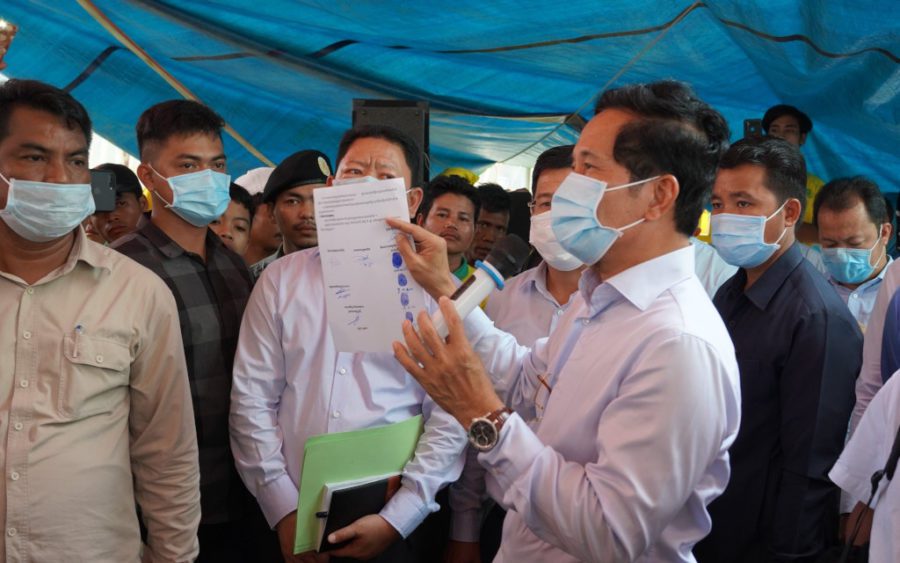 Confusion reigned after the latest round of negotiations over a garbage collectors’ strike, with workers applauding a speech by Phnom Penh governor Khuong Sreng before later realizing, according to a unionist, that “none of their demands were accepted.”

Sreng offered every worker 25 kg of rice to return to work by 3 p.m. Wednesday, workers said, but they ultimately declined because what they want is proper compensation.

The garbage collectors’ strike has been ongoing since Friday as more than 2,000 workers fear they will miss out on severance and other benefits amid restructuring of the capital’s waste management operations.

On Wednesday, many cheered as Sreng offered gifts of rice to those who agreed to return to work.

“You will get rice,” Sreng said in his speech. “I will ask Samdech [to provide] for everyone,” he said, using an honorific for Prime Minister Hun Sen.

But they would not be compensated for the days they have been on strike, he warned. “Your salary has to be cut and I won’t help,” Sreng said.

The governor added that benefits were well defined in the law, and the workers would not miss out. “So everyone, please stop worrying,” Sreng said. “I’ve already guaranteed it. I won’t let you lose any of your benefits, even if your company changes.”

The state took control of Phnom Penh’s waste collection operator Cintri a year ago, and City Hall said this week that it would soon split up waste management duties among three qualified companies.

In a notice on Wednesday, City Hall said it had agreed to two demands: that workers won’t lose their seniority benefits, and they would keep their jobs in the upcoming transition.

Ou Ratana, deputy director of the Labor Ministry’s intervention and response unit for strikes and demonstrations, said the workers wanted to end their current contracts, cash out their benefits and re-sign with new companies.

But according to the law, they are not entitled to any severance if they are the ones asking to terminate their employment, Ratana said.

“They are destroying their money,” he said. “Because normally, if they ask the company to end their contracts, it means they’ve asked to resign.”

However, Kao Sokwat, the union leader for Cintri, said that after a discussion, the workers decided not to accept the government offer.

They were confused when they applauded, thinking that City Hall was actually going to pay out compensation, Sokwat said.

“[We’ve] just discussed with each other, and found out that none of [our] demands were accepted,” he said. “Now [the workers] are saying they won’t drive the trucks.”

Neang Sokha, a 40-year-old garbage collector, who has worked at Cintri since 2011, said he would go back to work if the workers’ demands were met.

“The important thing is paying us the seniority allowance and annual bonus,” Sokha said. “If [they] agree to offer that, we will go back to work as normal, no matter how the company changes.”

Din Soriya, who has worked at Cintri for 18 years, said a small contingent had agreed to the governor’s offer. But she got nothing from it, Soriya said.

“I will be OK with it when [they] offer [to meet] all demands. For now, none of them is put forward, and instead [they’re] asking us to go back to work for 25 kg of rice. What about the seniority allowance? Are they going to throw it away?”