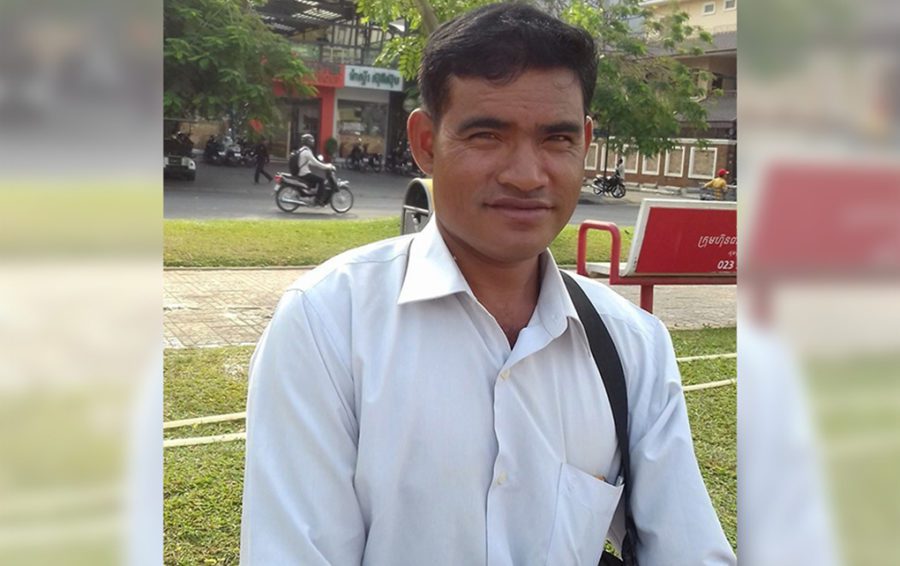 A former official from the Cambodia National Rescue Party (CNRP) was arrested on Monday for allegedly insulting Prime Minister Hun Sen on Facebook — though his wife claimed the arrest was in fact due to refusals to defect to the government.

The arrest came as Prime Minister Hun Sen also appeared to expand his “see one, beat one” policy for the repression senior officials from the opposition party, which was dissolved in November 2017, to also include lower-level members.

Su Yean, a vice president of the CNRP’s executive council in Tbong Khmum, was charged with “public defamation” and “incitement to commit a felony” on April 23 and sent for pre-trial detention, said provincial court spokesman Pheng Cheang.

Chak Sok Kao, a deputy provincial police chief, said that Yean was arrested on April 22 following a complaint received that day signed by 25 people from four provinces claiming that he had insulted the prime minister on Facebook.

However, Yean’s wife Srey Seat said she believed the reason for his arrest was his refusals to defect to the Cambodian People’s Party (CPP). The arrest, she explained, came after days of harassment from local officials, who made multiple visits to their home on the pretext of seeking information about pepper farmers.

“I believe that there are no other reasons [for the arrest] — it is only a party matter,” Seat said. “That’s it. I have no enemies. Yes, this is politically motivated.”

A friend of the arrested former CNRP official who asked not be identified for fear of facing similar consequences said Yean was active in social work in Memot district and was a popular figure both inside the opposition and in the local community.

Yean also refused to soften his criticism of the government following the forced dissolution of the CNRP nine months before last year’s national election, he said, and often criticized the “inactivity” of the government in the local area.

He said he thought it was plausible Yean’s wife’s account of the arrest was true.

The April 22 summons from provincial court prosecutor Long Hok Meng calling Yean in for questioning — and giving him until April 30 to turn himself, in spite of his arrest the following day — said the offending post was made on April 20.

As of April 24 there appeared to be no such posts insulting Hun Sen on Yean’s Facebook page on the date mentioned in the summons. His profile showed only “shared” posts of news reports from the U.S.-funded Voice of America and Radio Free Asia along with some commentaries of other CNRP activists.

However, Pankhem Bunthan, who led the October 2015 protest against opposition leader Kem Sokha outside the National Assembly at which two CNRP lawmakers were severely beaten by Hun Sen’s bodyguards as they attempted to leave the building, said he had organized the complaint and had evidence of the crimes.

“I saw it was shared from one to another,” Bunthan said of the insulating materials, adding that he was offended. “It reached my hand, and I reacted immediately.”

Bunthan is also an assistant to Hun Sen. He first came to prominence in June 2015 when he hosted large a public ceremony of CPP-affiliated youth activists to swear fealty to the prime minister and the ruling party on Phnom Penh’s riverside.

He did not say what the offending material said but claimed it was “excessively” insulting of the prime minister and appeared to be deliberately provocative.

Am Sam Ath, a technical supervisor for local rights group Licadho, said that the arrest of Yean seemed to be a new step in the repression of freedom of expression in Cambodia, speculating the defamatory material was in a group Facebook chat.

Previous such arrests have been for posts made publicly on Facebook profiles.

“It was not public — it was just the sending of a message and the source of message was not clear. Then it reached to a hand of one person who start suing,” Sam Ath said. “We have to think about what is [in fact] ‘publicly’ publicized.”

“There is a difference,” he added.

According to a report from Licadho, since 2014 at least 17 social media users have been charged and jailed for “public insult” or “incitement to commit a felony” after posted messages critical of government leaders to their Facebook profiles.

The prime minister, who has been the target of most of the critical posts that have led to arrest, has repeatedly warned officials from the banned opposition party not to continue their political activities else they face the wrath of the country’s police.

Speaking at the groundbreaking ceremony for the rail reconnecting Thailand and Cambodia on April 22, Hun Sen said he thought that he had made himself clear.

“There’s no need to talk for too long [about CNRP officials] because I have already advised: one rises up, attack one. Two rise up, attack two. That’s it, it doesn’t matter,” Hun Sen said. “When there’s an outlaw, it’s illegal. Get it done; that’s it.”

Kim Sok, an independent social and political analyst, said that the government seem preoccupied with silencing people who continued to show dissent even in the wake of the CPP’s dominating 125/125 seat national election win last year.

“The point of priority for Hun Sen’s power today is to use all tricks to repress the opposition from rising back up,” said Sok, who himself fled Cambodia last year after being released from an 18-month prison sentence for insulting Hun Sen.