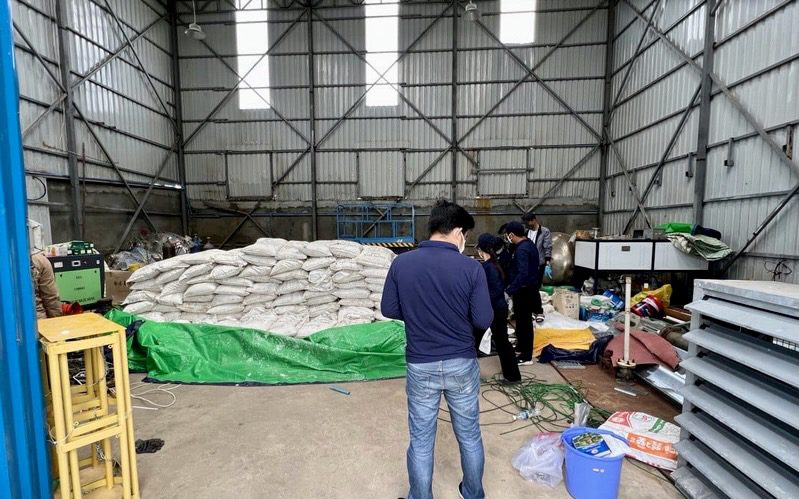 One of the seven locations where police seized a total of 1.8 tons of ketamine and nearly 300 tons of precursors in a series of raids last week. (National Police website)

A haul of nearly 2 tons of ketamine and 300 tons of precursors has led prosecutors to pursue money-laundering charges against 11 arrested foreign nationals, a Phnom Penh court spokesperson said.

Police this month shut down seven sites tied to ketamine manufacturing, seizing 1.8 tons of the drug and 276 tons of chemicals used to manufacture it, leading to the arrests of 11 Chinese and Taiwanese men, this week.

National Police said the final products were destined for Taiwan and Australia and were to be transported by sea, noting that ketamine was worth around $13,500 per kg on the Cambodian market.

Phnom Penh Municipal Court spokesman Plang Sophal said on Thursday that prosecutors were pursuing charges of illegal production, storage, transport and trafficking of drugs and chemicals, as well as a series of money laundering charges. The drug charges could lead to life imprisonment.

Laundering money generated from drug trafficking is punishable by 10-20 years in prison and a file of 10-50 million riel, or around $2,500-$12,500, for diverting or concealing the original source of properties and resources.

Sophal further referred to a Drugs Control Law article that potentially doubles the penalties if the suspects were found to be involved in organized crime, violence or several other aggravating factors, and to an article on the seizure of assets from a criminal organization.

The massive bust, in which the finished drugs alone are estimated to be worth over $24 million, follows a large similar ketamine bust late last year, and warnings from the U.N. Office of Drugs and Crime that international crime syndicates are taking root in Cambodia for the manufacture of illicit drugs.

Last year’s ketamine drug bust led to life sentences for 11 foreign nationals from Taiwan and China in April. Anti-drug police said at the time that they were still looking for 10 suspects involved in that previous case.