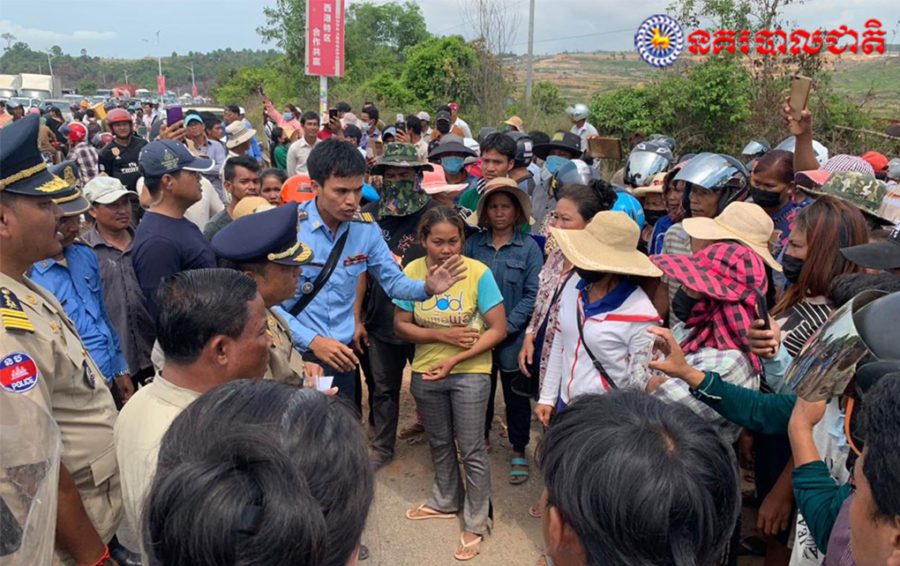 Eight people were arrested on Friday for using violence against authorities after they pelted rocks at police sent by the Preah Sihanouk Provincial Court to enforce orders to clear their homes in the coastal province’s Prey Nob district.

The clash took place at Chomnout Ream village in the district’s Bit Traing commune, which is about 3 km northwest of the Sihanoukville International Airport along National Road 4 and 2 km southeast of Sihanoukville’s Special Economic Zone. In January, police shot a resident in another land dispute in the commune.

At 8 a.m. Friday, about 100 residents turned out to protest against police sent to dismantle their homes and tried to establish a makeshift roadblock with boulders and tree branches, said Preah Sihanouk Provincial Police Chief Chuon Narin.

Some residents then attempted to repel the police by throwing rocks, he said.

Narin said six of his officers were injured — including two who with head injuries — and that three cars were damaged as the police retreated. Eight of the land dispute protesters were subsequently arrested, including seven men and one woman.

“People have the right to protest and to express themselves but in a dignified way. And don’t take the option of blocking public roads — that’s illegal,” Narin told VOD.

Cheap Sotheary, a coordinator for local rights group Adhoc in the province, said many of the protesters had been expelled from the land on Thursday and returned in the morning to collect left-behind belongings but were blocked by police.

Authorities had on Thursday already started executing orders to dismantle more than 600 homes that the provincial court ruled were illegally built by the residents on the land that lies just behind the booming seaside city of Sihanoukville.

Following the incident, the provincial authorities issued a statement saying that they had already ordered the residents in Bit Traing commune many times to stop building on the disputed land, but that they had refused to leave voluntarily.

“The Preah Sihanouk Provincial Administration would like to appeal to the people who have illegally built huts on the state public land and the legitimate private land that they must immediately stop the activity of encroaching, because this is an act that must come to face the laws that are in place,” the statement said.

Under the 2001 Land Law, the government considers much of Cambodia’s land “state public land” — with little reference to how long it has been settled — which it can convert to “state private land” and hand to developers as a concession.

The provincial administration’s statement blamed fraudulent land brokers for the dispute in Bit Traing commune, suggesting the residents had been sold land that brokers had no right to sell due to it being “state public land” or privately-owned land. It appealed to the public to “stop believing the incitement of the brokers, who claim that there is an offering of land and the sale of land at low prices.”

Land disputes in the Preah Sihanouk Province have been on the rise in recent months in the wake of a surge of development in the area driven by a boom in casinos catering mostly to Chinese gaming tourists. About 1.9 million Chinese tourists in total visited Cambodia last year, a 70 percent year-on-year increase.

Sihanoukville is exempted from a monopoly license for operating casinos within a 200 km radius of Phnom Penh that was handed to NagaCorp in 1995 and is valid until 2035. This has led to a boom in construction in Preah Sihanouk province — with official figures recently placing the number of casinos there now at 88.

The issue of development-driven land disputes has also been one of the issues named by the European Union as an area of concern amid its six-month review of Cambodia’s eligibility for its “Everything But Arms” tariff-exemption scheme.

In March, Prime Minister Hun Sen sacked two deputy governors of Preah Sihanouk Province following a violent crackdown on land-dispute protesters in a village in the same commune, when a police officer shot a man in the back.