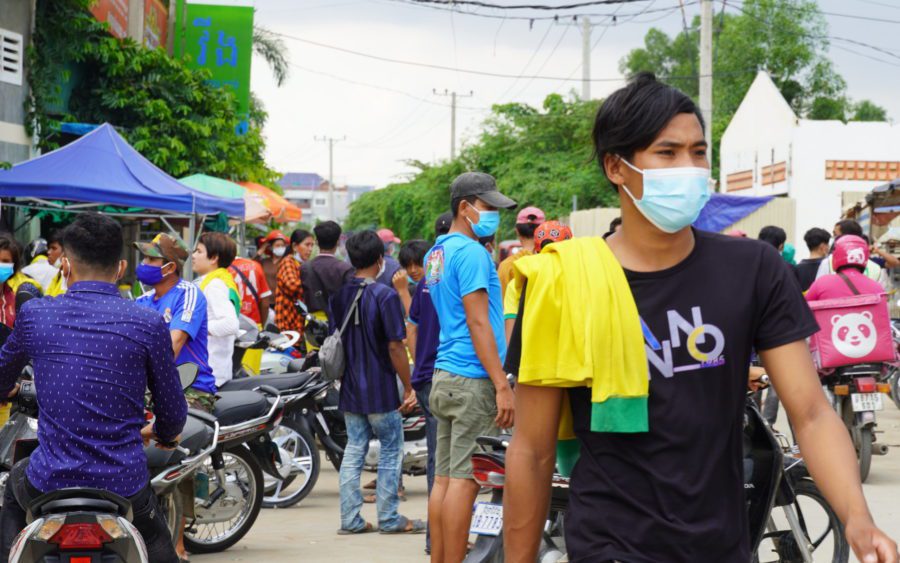 City Hall and trash collector Cintri banned workers from resigning from their jobs, then gave just one day of notice before terminating them, and said a prior promise about guaranteeing future employment was never valid because workers kept up a strike after the offer was made.

“I swept even in the rain. I always got up at 3:30. I didn’t have a raincoat to wear, nobody gave us one. And if we were sick and didn’t receive permission, my money was deducted,” said Nop Vannak, a 47-year-old who cleaned roads during trash collection for Cintri. “I am frustrated and I blame them a lot because I am very angry.”

Vannak is one of 1,176 Cintri workers fired as of July 1. Following years of complaints about poor service, Cintri was put under state management in 2019, and as of July its work split up among three companies.

Cintri will continue to collect trash in one of the three areas, but many of the workers in the other two jurisdictions are now jobless. The company posted the 1,176 names of terminated workers on the day of the transition.

Horn Srun, a night-shift trash collector in Prampi Makara district, said his manager banned him from applying for work at the new company that would be taking over.

“Our leaders forbid us from applying. [They said] they would transfer our names to the new companies when they start, so there’s no need to apply,” Srun said. “Later, they drop us and now we have no job.”

Hean Chanda said the workers were given a final three-month contract ahead of the transition, and in the final two weeks were made to sign a further clause that would cost them $1,000 if they resigned early. He claimed the company guaranteed future work when they signed it.

“They requested us to give a thumbprint on a short-term contract. Given the thumbprint, they guaranteed our job. But finally they dropped us. They didn’t let us go to the new companies or we would pay the company $1,000.”

Chanda said he had no money. “Since I was laid off, I ran out of money to buy food to eat,” he said. “I ate rice by loan.”

Bou Ravy, 34, said he was pressured to not go looking for new work, and then he was fired without notice. “The company put pressure on us, and if we stopped and went to a new company, they would take $1,000,” he said.

More than 200 employees working in Pur Senchey district with him were laid off, he said.

The two new companies taking on the waste management load in Phnom Penh are Singaporean 800 Super and Chinese-owned Mizuda Sanitation. 800 Super has not responded to questions. A Mizuda representative last week said it had recruited all workers it needed already through a normal process, and any promise of jobs was between Cintri workers and City Hall.

Va Malin, a 48-year-old street sweeper since 2013, added that workers were still owed half a month of salaries, and were promised it would be paid out on July 14.

Despite feeling betrayed over their employment, the workers were asked to hand back all ID and trust that they would be paid in two weeks.

“Why do they do that?” Malin said. “They just promise with their word, the 14th. Why don’t they give it to us all at once? Our card and everything is taken away and now we are out of a job.”

Sok Huot, Cintri’s deputy director, said on Wednesday that the final two-week agreement with employees was not about additional workers’ benefits but about ensuring the smooth operation of garbage collection in each district before the new companies came in.

About 80 percent of workers had asked to resign during the final months, so the terms of the contract were needed to keep trash collection going, he said.

“This work was the biggest aim for the company. It is to maintain our job stability, not letting them leave before, which would cause the garbage to pile up in Phnom Penh city so that it would be difficult to manage,” Huot said, adding that workers had already received other compensation.

“This was a short transition period for the last two weeks due to seeing the workers withdrawing earlier,” he said.

Huot added that the company had informed the workers about the layoffs one day before the official announcement. All workers were also already aware that some areas would be transferred to new companies, he said.

Phnom Penh deputy governor Keut Chhe said it was the workers who had refused City Hall’s guarantee of new employment.

Cintri workers went on a strike for over a week in October trying to secure seniority and other payments before the transition to new companies. The citywide strike caused trash pile ups across Phnom Penh and lengthy negotiations involving the city governor. A City Hall letter of October 7 offered a guarantee the workers would retain employment even after the transition. The strike ended over a week later when Cintri promised pay out benefits in February.

“When the governor guaranteed their employment, they did not go back to work according to the agreement. They kept on striking, until the Phnom Penh capital administration strengthened the garbage collection work effectively. When they saw that, they were afraid of losing their jobs, so they asked to return to work. This means they refused the previous agreement,” Chhe said.

City Hall no longer had any promises with them to secure jobs, and those who do not have jobs yet can apply with the new companies, he said. The decision is up to the companies, and the municipality has no right to interfere, he said.