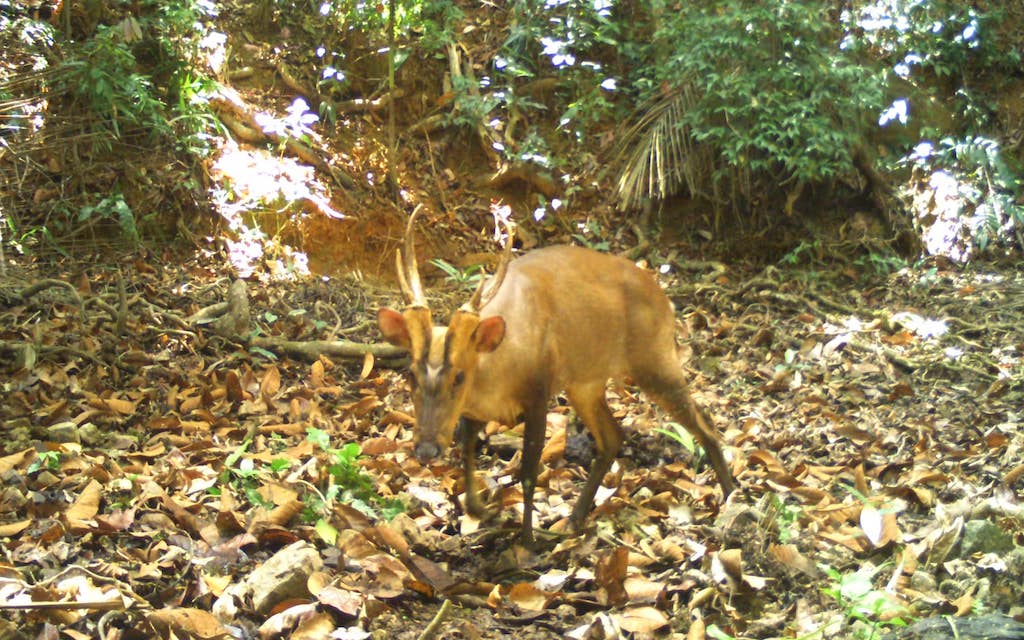 A giant muntjac was sighted in Ratanakirri province’s Virachey National Park, in a photograph posted to the Environment Ministry’s Facebook page.

Camera traps have captured images of the giant muntjac, a critically endangered deer, for the first time in Cambodia, an Environment Ministry spokesperson said.

The giant muntjac, or Muntiacus vuquangensis, was only discovered by scientists in Laos in 1994, according to an academic paper by the Wildlife Conservations Society and Yale University.

Pin Chanratana, head of the research team at the Environment Ministry’s conservation department, said the giant muntjac’s horns were once seen on sale in a remote Mondulkiri village in the 1990s, but research had not confirmed any live sightings in Cambodia.

The giant muntjac is the largest of 12 species of muntjac deer, weighing more than 30 kg, Chanratana said.

Three characteristics distinguished the giant muntjac from the common muntjac, he said.

They typically live in dense and semi-dense forests, Chanratana said.

Environment Ministry spokesman Neth Pheaktra said late Thursday that the images of the giant muntjac were captured in Ratanakiri province’s Virachey National Park, in the far northeast of the country, between March and May.

“This is very good news for Cambodia and for the whole world that this most endangered species is present in Cambodia,” Pheaktra said. The finding is valuable for conservation, and “it is necessary for all of us to participate in protecting and conserving this rare species to survive in the forests of Cambodia.”

The species is considered critically endangered internationally, and it is threatened due to hunting for its antlers and meat, Pheaktra said, reminding all members of the public to avoid eating wildlife and working to end the illegal trapping, hunting and trafficking of animals.

Muntjacs are also known as barking deer because of their unique calls, which are akin to a barking dog.