For Shooting Victim, Incident Anything but ‘Resolved’ 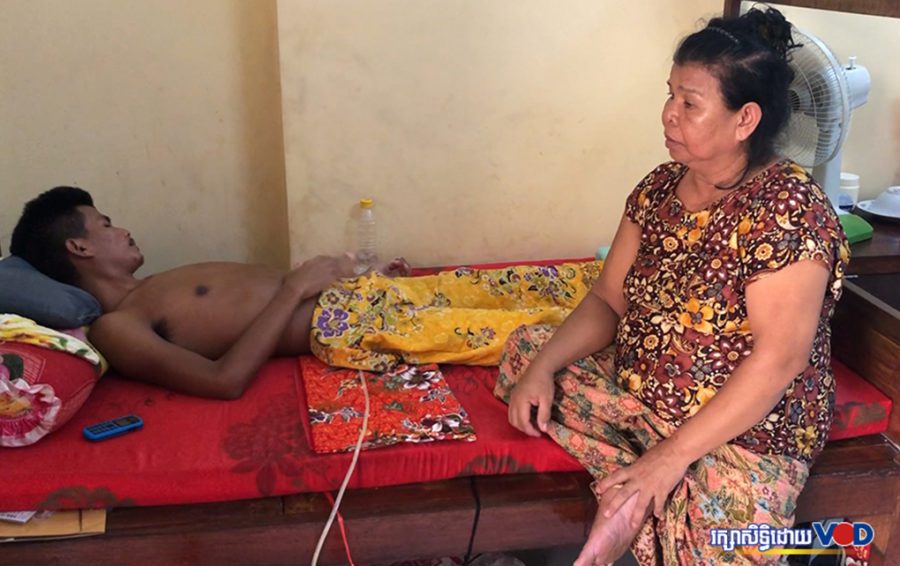 BATTAMBANG CITY — After being shot in the back five months ago in a violent crackdown by military police on a land-dispute protest, Pov Saroath is now deep in debt and faces a life without the use of his legs. For provincial authorities involved in the incident, at least, the situation has been labeled “completely resolved.”

But things are far from resolved for Saroath.

On January 24, Saroath, a 28-year-old construction worker, had gone out for lunch when he came across the sight of hundreds of armed officers staring down land protestors in Bit Traing commune in Preah Sihanouk province’s Prey Nop district.

He stayed to watch as the situation escalated. The protestors — estimated in various reports as numbering between 100 and 300 — had rejected a Supreme Court order awarding what they considered to be their land in Korki village to nine families backed by Hong Suon, the wife of ruling party-linked tycoon Sy Kong Triv.

Confronted by an estimated 300-strong mixed force from police, military police and the military, protestors burned tires and hurled petrol bombs. Officers fired 20 warning shots into the air, according to a report issued by provincial authorities.

Lying on a hospital bed this weekend at the Battambang Spinal Cord Rehabilitation Center, Saroath said that one of those bullets struck his spine. Photographs taken on the day show him collapsed on the ground as others around him were arrested.

A few hours later, he was sent to the Preah Kossamak Hospital in Phnom Penh for emergency care, he said. They told him he was paralyzed from the waist down.

Before the incident, Saroath had been able to walk and work to support his family, he explained, but these days he cannot even tell when his bowels emptied. He had received required treatment in Phnom Penh for a month, until his funds ran out.

At one point, a delegation of officials led by Preah Sihanouk provincial governor Yun Min visited and gave his family $2,000. But that money ran out fast. So he returned to his mother’s home village in Battambang, where rights group Licadho referred him to the Spinal Cord Rehabilitation Center for free treatment.

Doctors at the Spinal Cord Rehabilitation Center have told Saroath that in about six months he should know whether he will ever walk again. The prospect offers a glimmer of hope. Still, despite the free treatment at the center, Saroath’s mother, Orn Ien, said the family was $2,000 in debt five months after the shooting.

“The hospital does not charge anything but we have to cover our daily eating and buying supplies like bandages,” Ien said, explaining costs added up fast without a bread-winner. “What we need to use for ourselves, we have to buy. So we lack of money. And when we lack money, the only thing is to ask for loans from others.”

The violent crackdown on land protesters in Preah Sihanouk caught the attention of Prime Minister Hun Sen after a widely shared video showed soldiers beating a man with the butt of an AK-47 rifle while his hands were tied behind his back.

“I have no time to talk with crafty officers because I have already educated them many times. From now, tigers, snakes, rats and flies will all be punished if they take advantage of the people,” Hun Sen said in a speech in February.

National Military Police spokesman Eng Hy initially denied his officers were involved in the shooting but later suspended one officer for using violence and disciplined four others, including a deputy commander. A Royal Cambodian Armed Forces soldier was taken to court over beating a protester with his rifle.

Peah Sihanouk province spokesman Kheang Phearum said that the government had taken accountability for the incident, including by helping the victim’s family.

“There was money provided for treatment, and in this matter the relevant institutions — such as the military police and military — punished the officials who carried out the court order,” Phearum said. “For this matter, we can say it is completely resolved already, as far as I know.”

If Saroath’s family considered the aid they received from officials deficient — or their treatment unfair — they could find a legal consultant to help them, he said.

Am Sam Ath, a senior investigator with Licadho, the rights group, said that the government had not taken enough responsibility for Saroath’s injuries, despite Phearum’s claims. A recurrent failure for the government to take responsibility in such cases made many victims feel hopeless about trying, Sam Ath added.

Betraying his frustrations, Saroath said he of course wanted to find justice and receive adequate compensation for his life-changing injuries. But trying to build a legal case was beyond the circumstances and abilities of his family, he said.

“Everyone wants justice, brother. Being shot like this, I always feel I want justice,” Saroath told VOD, saying his injuries prevented him from doing much. “I don’t know how we can ask for it because we are far away, and partly I am sick. If I could walk, I could fight in court, but when I am sick, I have no time to do it.”