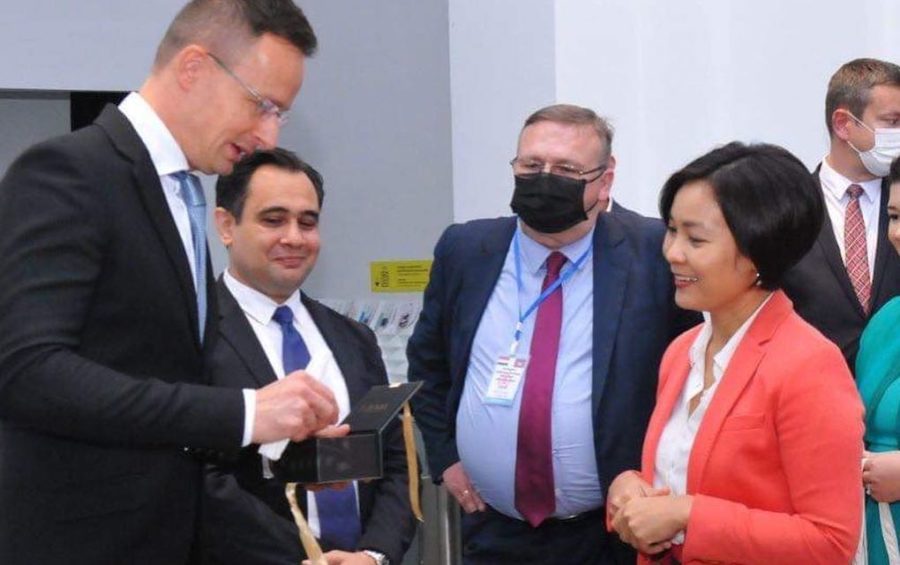 Hungarian Foreign Minister Peter Szijjarto (left) meets with Chea Serey, the National Bank’s director-general of central banking, at Phnom Penh’s Cambodia Museum of Money and Economy on November 3, 2020, in this photograph posted to her Facebook page.

UPDATED 8:10 a.m.—More than 1,100 people have now been tested for suspected direct or indirect contact with a visiting Hungarian foreign minister, the Health Ministry said on Tuesday, but it remained unclear how many received second tests on Monday as urged by the Health Ministry.

Peter Szijjarto visited the country a week ago without following quarantine procedures for diplomats, and tested positive for Covid-19 after arriving in Bangkok the same evening. Four people in Cambodia have so far tested positive for the disease following contact with Szijjarto, all on their second tests after earlier testing negative.

Some 1,166 people have been tested for Covid-19 in relation to Szijjarto’s visit, the ministry said, but did not say how many tests were conducted on Monday or how many of the 1,166 contacts have been tested twice and how many did not show up for their second tests.

Ministry spokesperson Or Vandine said it was “not important” to know how many people followed the protocol of getting their second tests.

“The important thing is whether it is positive or not,” she said.

In an email response sent on Tuesday night, WHO country representative Li Ailan said WHO has distributed international guidelines for identifying and tracing contacts of a confirmed Covid-19 case, but she said that countries adapt to the guidelines “based on its local needs, context and resources.”

“For the recent event linked to the Hungarian Foreign Minister, we are aware the government has conducted contact tracing and management based on the event setting, and has put all contacts under quarantine and implemented other public health measures,” she said in an email.

She added that all people should be taking preventative measures, such as practicing good hygiene and avoiding closed spaces, close contact and crowds.

The Health Ministry prepared testing stations at Phnom Penh’s Council of Ministers building on Monday, with 13 government institutions allotted time slots throughout the day for their officials to be tested.

On Tuesday, the Health Ministry said there were three positive tests on Monday, adding to an earlier positive case found on Saturday.
Contact tracing has now extended to seven provinces outside Phnom Penh, though it was not clear what criteria was being used for testing and quarantine or which authority was leading the contact tracing efforts.

Social analyst Meas Nee said people had the right to get a broad range of true information about the disease and its spread.

“It is the government’s responsibility,” Nee said. Not enough geographical information, for instance, could lead to transmission in that area, he said.

There have been previous reports of people testing positive for Covid-19 after leaving the country, Nee noted.

China, Vietnam and Malaysia have all reported such cases since September, though the Health Ministry has denied in several cases that they could have been infected in Cambodia.

Guangdong provincial health authorities reported one case of Covid-19 on October 28 that had arrived from Cambodia, and another five tracing back to Cambodia on October 30.

Nee said these cases raised questions about health control measures in the country.

In an audio recording disseminated Monday night, Prime Minister Hun Sen asked the public to take the situation seriously but not panic.

“I would like to take this opportunity to appeal to our people not to panic in this situation. Even though it is serious, it has not reached a level that should make us panic and lead to a rise in the price of goods,” Hun Sen said. “We are controlling the situation and our people can continue their normal lives.”

Updated on November 11 at 8:10 a.m. with comments from WHO country representative Li Ailan